From Infogalactic: the planetary knowledge core
Jump to: navigation, search
For the butterfly known as "Staff Sergeant", see Athyma selenophora.

Staff Sergeant is a rank of non-commissioned officer used in the armed forces of several countries. It is also a police rank in some police services.

In origin certain senior sergeants were assigned to administrative, supervisory, or other specialist duties as part of the staff of a British army regiment. As such they held seniority over sergeants who were members of a battalion or company, and were paid correspondingly increased wages. Their seniority was indicated by a crown worn above the three sergeants' stripes on their uniform rank markings.

In the Australian Army and Cadets, the rank of staff sergeant is being phased out.[1] It was usually held by the company quartermaster sergeant or the holders of other administrative roles. Staff sergeants are always addressed as "Staff Sergeant" or "Staff", never as "Sergeant" as it degrades their rank. "Chief" is another nickname though this is only used for the company chief clerk (in some instances the chief clerk role can be filled by another non-commissioned rank (but not warrant officer) and still be referred to as "Chief"). A staff sergeant ranks above sergeant and below warrant officer class 2.

For further information, you may refer to Israel Defense Forces ranks.

In the Israel Defense Forces, soldiers are promoted from sergeant to staff sergeant (samál rishón) after 28 months of service for combat soldiers, and 32 months of service for non-combat soldiers, if they performed their duties appropriately during this time. Soldiers who take a commander's course may become staff sergeants earlier (usually after 24 months of service, or one year from becoming a commander). The rank insignia is composed of three clear-blue stripes (as is the rank of sergeant) with an embroidered fig leaf, a biblical motif, in the center of the rank insignia. Staff sergeants get a symbolic pay raise.

A staff sergeant (SSG) in the Singapore Armed Forces ranks above first sergeant and below master sergeant. It is the second most senior specialist rank. Staff sergeants are addressed as "Staff Sergeant" or "Staff", but never "Sergeant".[2]

Staff sergeants may be appointed as company sergeant major if they are due for promotion to master sergeant.[citation needed] They are usually addressed as "CSM" in camp, although in the past they were referred to as "Encik", which is now used to address only warrant officers. 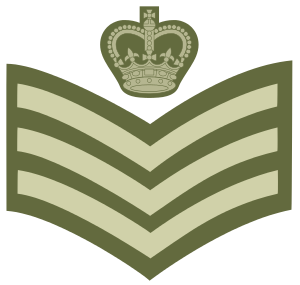 Rank markings of a Staff Sergeant in the British Army.

In the British Army, staff sergeant (SSgt or formerly S/Sgt) ranks above sergeant and below warrant officer class 2. The rank is given a NATO code of OR-7. The insignia is the monarch's crown above three downward pointing chevrons.

Staff Sergeant (SSgt) is E-6 rank in the U.S. Marine Corps (USMC), just above Sergeant and below Gunnery Sergeant. A Marine Staff Sergeant is a staff non-commissioned officer rank. Staff NCOs are career Marines serving in grades E-6 through E-9. Together they are responsible to the commanding officer for the welfare, morale, discipline, and efficiency of Marines in their charge. This grade is normally achieved after 7 to 10 years in service. The NATO code is OR-6. In the combat arms units, a Staff Sergeant usually is billeted as a platoon sergeant for 30+ Marines. Staff Sergeants also serve as section leaders in crew-served weapons platoons (e.g., mortars, machine guns, anti-tank missiles) and in tank/armored vehicle platoons under a Gunnery Sergeant serving as platoon sergeant. They may also be tasked as a company gunnery sergeant, or a platoon commander if required. They are the senior tactical advisor to a platoon commander by virtue of time in service, previous deployments, and experience and are responsible for the proficiency, training and administrative issue of his or her Marines. They are referred to by their complete rank (i.e. "Staff Sergeant Jones" or simply "Staff Sergeant," with the abbreviation "SSgt").

Staff sergeant (SSgt) is E-5 in the U.S. Air Force. It ranks just above senior airman and below technical sergeant. It is the Air Force's first non-commissioned officer rank, as well as the first Air Force rank to which promotion is attained on a competitive basis. Sergeants, also known in Air Force jargon as "buck sergeant"', no longer exist, having been eliminated in the 1990s after sharing the same pay grade with that of the rank of senior airman (E-4). Staff sergeants are expected to be technically proficient and function as first-line supervisors within a 'work center'. After being selected for promotion, senior airmen must attend Airman Leadership School, which teaches them basic leadership skills and how to write performance reports to become staff sergeant. The term of address is "Staff Sergeant" or "Sergeant". High year of tenure was reduced from 20 to 15 years in 2013.

The rank of 'staff sergeant' is used in some police forces to indicate a senior supervisor. The rank is commonly used, for example, in most Canadian police services, and in the Hong Kong Police Force. Other national police services (for example, Cyprus) have a corresponding rank of 'senior sergeant'. In the United Kingdom, the equivalent police rank for more than a century was 'Station sergeant', using the same rank markings as an army 'staff sergeant'. Station sergeants were first appointed in 1890, and the final appointment in a mainstream British police force was in 1989. The rank is still used in at least one of the British specialist police forces, the Port of Felixstowe Police.

A number of other organisations, basing their structure on military ranks, have historically used, or still use, the rank of 'staff sergeant'. The rank of staff sergeant was, for example, phased out of the rank structure of St John Ambulance (England and the Islands) in the early 1990s.