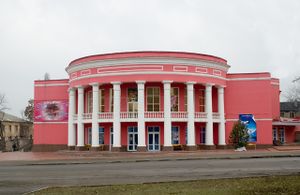 The Mir Cinema in Stakhanov.

Stakhanov (Ukrainian: Стаханoв; Russian: Стаханoв) is a city in the Luhansk Oblast (region) of eastern Ukraine. The city is incorporated as a city of oblast significance. Population: 77,593 (2013 est.)[2].

The city is named after the famous Soviet miner Alexey Stakhanov, who started his career there. From 1937 to 1940 the city was named Sergo (Ukrainian: Серго), and before 1937 and from 1940 to 1978 the city was known as Kadievka (Russian: Кадиевка), or Ukrainian Kadiyivka (Ukrainian: Кадіївка). A labor camp for German prisoners of war was established at Stakhanov during the Second World War.

According to reports on September 16 2014, the city, which had been occupied by Lugansk People's Republic-affiliated Don Cossacks, seceded from the LPR on 14 September.[8] It was said Don Cossacks there proclaimed the Republic of Stakhanov, and that a "Cossack government" now ruled in Stakhanov.[9][8] However the following day this was claimed to be a fabrication, and an unnamed Don Cossack leader stated the September 14 meeting had, in fact, resulted in 12,000 Cossacks volunteering to join the LPR forces.[10]

Notable people that were born or lived in Stakhanov include: