From Infogalactic: the planetary knowledge core
(Redirected from Stakhanovite)
Jump to: navigation, search 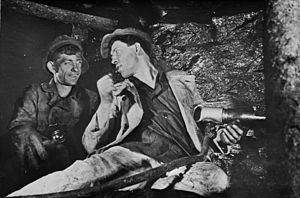 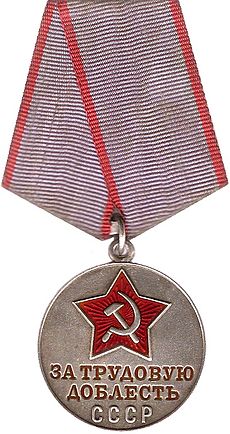 In Soviet history and iconography, a Stakhanovite (Russian: стахановец) follows the example of Aleksei Grigorievich Stakhanov, employing hard work or Taylorist efficiencies to over-achieve at work.

The Stakhanovite movement began during the Soviet second 5-year plan in 1935 as a new stage of socialist competition. The Stakhanovite movement took its name from Aleksei Grigorievich Stakhanov, who had mined 102 tons of coal in less than 6 hours (14 times his quota) on 31 August 1935.[1] However, Stakhanovite followers would soon "break" his record.[1] On February 1, 1936, it was reported that Nikita Izotov had mined 607 tons of coal in a single shift.[citation needed]

On November 14–17, 1935, the 1st All-Union Stakhanovite Conference took place at the Kremlin. The conference emphasized the outstanding role of the Stakhanovite movement in the socialist re-construction of the national economy. In December 1935 the plenum of the Communist Party's Central Committee specifically discussed aspects of developing industry and transport systems in light of the Stakhanovite movement. The resolution of the plenum said: "The Stakhanovite movement means organizing labor in a new fashion, rationalizing technologic processes, correct division of labor, liberating qualified workers from secondary spadework, improving work place, providing rapid growth for labor productivity and securing significant increase of workers' salaries".

In accordance with the decisions of the plenum, the Soviets organized a wide network of industrial training and created special courses for foremen of socialist labor. In 1936 a number of industrial and technical conferences revised the projected production capacities of different industries and increased their outputs. They also introduced Stakhanovite competitions within factories and plants, broken down into periods of five days (Russian: пятидневка, or pyatidnevka), ten days (Russian: декада, or dekada) and 30 days (Russian: месячники, or mesyachniki). The factory management would often create the Stakhanovite brigades or departments, which reached a stable higher collective output.

Female Stakhanovites emerged more seldom than male ones, but a quarter of all trade-union women were designated[by whom?] as "norm-breaking".[2] A preponderance of rural Stakhanovites were women, working as milkmaids, calf tenders, and fieldworkers.[4]

Opposition to the movement merited the label of "wrecker".[5]

The Soviet authorities[which?] claimed that the Stakhanovite movement had caused a significant increase in labor productivity. It was reported that during the first 5-year plan (1929–1932) industrial labor productivity increased 41%. During the second 5-year plan (1933–1937) it reportedly increased 82%. The discussion of the draft constitution in the 1930s was used[by whom?] to encourage a second wind for the movement.[6]

During World War II the Stakhanovites used different methods to increase productivity, such as working several machine-tools at a time and combining professions. The Stakhanovites organized the ru (Russian: двухсотники, or dvukhsotniki; 200% or more of quota in a single shift) and one-thousanders movement (Russian: тысячники, or tysyachniki; 1000% of the norm in a shift). The Stakhanovite movement remained widespread after the war.

The press, literature and films praised Stakhanov and other "model workers", urging other workers to emulate their heroic examples. The achievements of Stakhanovites served as an argument in favor of increasing work quotas. 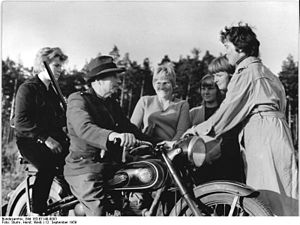 After Stalin's death in 1953 the USSR and its satellite countries continued to encourage workers to exceed production targets and to publicise those who did so.
In September 1959 near Neustrelitz, East Germany, a forester on his AWO 425T motorcycle congratulates a team of women who achieved 184% of work target by planting 25,000 saplings in the time that they were set a quota of 16,000.

In the de-Stalinization era, which sought to undermine any achievements made during Stalin's régime, the Stakhanovite movement was declared[by whom?] a Stalinist propaganda maneuver. Where workers received the best equipment and most favorable conditions, the best results would be achieved. After Stalin's death in March 1953 "brigades of socialist labor" replaced Stakhanovitism. In 1988 the Soviet newspaper Komsomolskaya Pravda claimed that the widely propagandized personal achievements of Stakhanov were puffery.[clarification needed] The paper insisted that Stakhanov had used a number of helpers on support work, while the throughput was tallied for him alone. Stakhanov's approach had eventually led to the increased productivity by means of a better organization of the work, including specialization and task sequencing, according to the Soviet state media.[7]