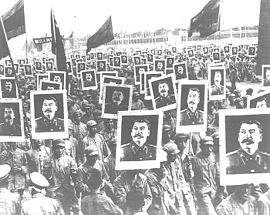 A celebration of Stalin's 70th birthday in the People's Republic of China.

Joseph Stalin's cult of personality became a prominent part of Soviet culture in December 1929, after a lavish celebration for Stalin's 50th birthday.[1] For the rest of Stalin's rule, the Soviet press presented Stalin as an all-powerful, all-knowing leader, and Stalin's name and image became omnipresent. From 1936 the Soviet journalism started to refer to Joseph Stalin as the Father of Nations.[2]

Stalin's image in propaganda and the mass media 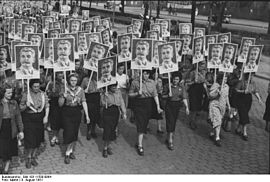 Female members of the FDJ carry Stalin's pictures in the 3rd World Festival of Youth and Students in East Berlin.

The Soviet press constantly praised Stalin, describing him as "Great", "Beloved", "Bold", "Wise", "Inspirer", and "Genius".[3] It portrayed him as a caring yet strong father figure, with the Soviet populace as his "children".[4] Interactions between Stalin and children became a key element of the personality cult. Stalin often engaged in publicized gift giving exchanges with Soviet children from a range of different ethnic backgrounds. Beginning in 1935, the phrase, "Thank You Dear Comrade Stalin for a Happy Childhood!" appeared above doorways at nurseries, orphanages, and schools; children also chanted this slogan at festivals.[5]

The image of Stalin as a father was one way in which Soviet propagandists aimed to incorporate traditional religious symbols and language into the cult of personality; the title of "father" now first and foremost belonged to Stalin, as opposed to the Russian Orthodox priests. The cult of personality also adopted the Christian traditions of procession and devotion to icons through the use of Stalinist parades and effigies. By reapplying various aspects of religion to the cult of personality, the press hoped to shift devotion away from the church and towards Stalin.[6] Speeches described the dictator as "Our Best Collective Farm Worker", "Our Shockworker, Our Best of Best", and "Our Darling, Our Guiding Star".[3]

Initially, the press also aimed to demonstrate a direct link between Stalin and the common people; newspapers often published collective letters from farm or industrial workers praising the leader,[7] as well as accounts and poems about meeting Stalin. However, these sorts of accounts declined after World War II; Stalin drew back from public life, and the press instead began to focus on remote contact (i.e. accounts of receiving a telegram from Stalin or seeing the leader from afar).[8]

Another prominent part of Stalin's image in the mass media was his close association with Vladimir Lenin. The Soviet press maintained that Stalin had been Lenin's constant companion while the latter was alive, and that as such, Stalin closely followed Lenin's teachings and could continue the Bolshevik legacy after Lenin's death.[9] Stalin publicly fiercely defended Lenin's infallibility; in doing so, Stalin implied that, as a faithful follower of Leninism, his own leadership was similarly faultless.[10] Although he did not completely succeed in suppressing Lenin's statements criticizing him and suggesting that others remove Stalin from his position as leader of the Communist party, after Lenin's death 500,000 copies of a photograph of the two men apparently chatting as friends on a bench appeared throughout the Soviet Union.[3] Before 1932, most Soviet propaganda posters showed Lenin and Stalin together.[11] However, eventually the two figures merged in the Soviet press; Stalin became the embodiment of Lenin. Initially, the press attributed any and all success within the Soviet Union to the wise leadership of both Lenin and Stalin, but eventually Stalin alone became the professed cause of Soviet well-being.[12]

Other displays of devotion

Stalin became the focus of literature, poetry, music, paintings and film that exhibited fawning devotion. An example was A. V. Avidenko's "Hymn to Stalin":

Thank you, Stalin. Thank you because I am joyful. Thank you because I am well. No matter how old I become, I shall never forget how we received Stalin two days ago. Centuries will pass, and the generations still to come will regard us as the happiest of mortals, as the most fortunate of men, because we lived in the century of centuries, because we were privileged to see Stalin, our inspired leader ... Everything belongs to thee, chief of our great country. And when the woman I love presents me with a child the first word it shall utter will be : Stalin ...[13]

Numerous pictures and statues of Stalin adorned public places. Statues of Stalin depicted him at a height and build approximating the very tall Tsar Alexander III, but photographic evidence suggests he was between 5 ft 5 in and 5 ft 6 in (165–168 cm). Stalin-themed art appeared privately, as well: starting in the early 1930s, many private homes included "Stalin rooms" dedicated to the leader and featuring his portrait.[14]

The advent of the cult also led to a renaming craze: numerous towns, villages and cities were renamed after the Soviet leader. The Stalin Prize and Stalin Peace Prize were also named in his honor, and he accepted several grandiloquent titles (e.g., "Coryphaeus of Science", "Father of Nations", "Brilliant Genius of Humanity", "Great Architect of Communism", "Gardener of Human Happiness", and others).

Stalin and his glorifiers rewrote Soviet history to provide the leader a more significant role in the October Revolution of 1917 and early days of Bolshevik power. According to this revised history, Stalin, not Leon Trotsky, had been Lenin's second-in-command during the October Revolution. To this end, Stalin supported the concealment of historical documents, claiming that these documents told an incomplete and misleading story. Instead, Stalin presented himself as the leading authority in Party history and philosophy.[15]

The cult of personality primarily existed among the Soviet masses; there was no explicit manifestation of the cult among the members of the Politburo and other high-ranking Party officials. However, Stalin had a notoriously low tolerance for dissent within the Party; as such, the fear of backlash from Stalin made Party officials hesitant to honestly express their viewpoints, especially during the Stalinist show trials of 1937 and 1938. This atmosphere of fear and self-censorship created the illusion of undisputed government support for Stalin, and this perceived support further fueled the cult for the Soviet populace.[16] Although it was not an official uniform, party leaders throughout the Soviet Union emulated the dictator's usual outfit of dark green jacket, riding breeches, boots, and a cap to prove their devotion.[3]

Stalin's opinion of his cult

What Stalin thought of the cult surrounding him is unclear. Like Lenin, Stalin acted modestly and unassumingly in public. John Gunther wrote in 1936 that "He is the only dictator who is serene", citing Stalin's politeness and good manners to visitors.[3] In the 1930s Stalin made several speeches that diminished the importance of individual leaders and disparaged the cult forming around him, painting such a cult as un-Bolshevik; instead, he emphasized the importance of broader social forces. Stalin claimed that the only reason Lenin could acceptably be adored as a leader was because Lenin understood these social forces, and therefore knew how to most effectively channel the desires of the Soviet people. Stalin's public actions seemed to support his professed disdain of the cult: Stalin often edited reports of Kremlin receptions, cutting applause and praise aimed at him and adding applause for other Soviet leaders.[17] Walter Duranty stated that Stalin edited a phrase in a draft of an interview by him of the dictator from "inheritor of the mantle of Lenin" to "faithful servant of Lenin".[3] Additionally, in 1936, Stalin banned renaming places after him;[18] Gunther noted, however, that he sometimes spoke of himself in the third person.[3]

While Stalin could have stopped the pervasive level of frenzied devotion, he never chose to do so .[3] Privately, he claimed that he had tried to do so, but that everyone assumed he was acting out of false modesty. Stalin admitted that he understood the cult of personality was a necessary evil among the simpler section of the Soviet population, who were used to worshipping a tsar, but feared that for the intelligentsia, this attention on the individual would take the focus away from Party ideas.[19] Artyom Sergeev, Stalin's adopted son, recalled a fight between Stalin and his biological son Vasily. After Stalin found out that Vasily had used his famous last name to escape punishment for one of his drunken debauches, Stalin screamed at him. "'But I'm a Stalin too,' retorted Vasily. 'No, you're not,' said Stalin. 'You're not Stalin and I'm not Stalin. Stalin is Soviet power. Stalin is what he is in the newspapers and the portraits, not you, not even me!'"

To some degree, Stalin accepted the Soviet people's dedication to him as an embodiment of the Party, but he discouraged all interest in his private and family life, and divulged only limited personal information.[18] He rarely appeared in public, by the mid-1930s had met only seven foreign journalists for formal interviews, and during the first five-year plan made no speeches or public appearances for 18 months.[3] The Finnish communist Arvo Tuominen reports a sarcastic toast proposed by Stalin at a New Year Party in 1935 in which he said, "Comrades! I want to propose a toast to our patriarch, life and sun, liberator of nations, architect of socialism [he rattled off all the appellations applied to him in those days] – Josef Vissarionovich Stalin, and I hope this is the first and last speech made to that genius this evening."[20]

Stories of the childhood of Stalin

The "Stories of the Childhood Stalin", was a book of stories supposedly of Stalin's childhood life. On 16 February 1938, within days of its release on bookshelves, Stalin wrote a letter to the Central Committee of the All Union Komsomol to tell them of his disdain for the book they promoted:

I am absolutely against the publication of "Stories of the childhood of Stalin". The book abounds with a mass of inexactitudes of fact, of alterations, of exaggerations and of unmerited praise. Some amateur writers, scribblers, (perhaps honest scribblers) and some adulators have led the author astray. It is a shame for the author, but a fact remains a fact. But this is not the important thing. The important thing resides in the fact that the book has a tendency to engrave on the minds of Soviet children (and people in general) the personality cult of leaders, of infallible heroes. This is dangerous and detrimental. The theory of "heroes" and the "crowd" is not a Bolshevik, but a Social-Revolutionary theory. The heroes make the people, transform them from a crowd into people, thus say the Social-Revolutionaries. The people make the heroes, thus reply the Bolsheviks to the Social-Revolutionaries. The book carries water to the windmill of the Social-Revolutionaries. No matter which book it is that brings the water to the windmill of the Social-Revolutionaries, this book is going to drown in our common, Bolshevik cause. I suggest we burn this book. [21]

End of the cult and de-Stalinization

After Stalin's death, Nikita Khrushchev's 1956 "Secret Speech" to the Twentieth Party Congress famously denounced Stalin's cult of personality, saying, "It is impermissible and foreign to the spirit of Marxism-Leninism to elevate one person, to transform him into a superman possessing supernatural characteristics akin to those of a god."[22] The "Secret Speech" initiated a political reform, known as De-Stalinization, that sought to eradicate Stalin's influence on the Soviet society.