From Infogalactic: the planetary knowledge core
(Redirected from Stalin's house, Gori)
Jump to: navigation, search
File:Stalinmuseum.JPG
The Joseph Stalin Museum in Gori- in the foreground, the house where Stalin was born

The Joseph Stalin Museum is a museum in Gori, Georgia dedicated to the life of Joseph Stalin, the leader of the Soviet Union, who was born in Gori. The Museum retained until recent years its Soviet-era characteristics.

The museum has three sections, all located in the town's central square. It was officially dedicated to Stalin in 1957. With the downfall of the Soviet Union and independence movement of Georgia, the museum was closed in 1989, but has since been reopened, and is a popular tourist attraction.

Enshrined within a Greco-Italianate pavilion is a small wooden hut, in which Stalin was born in 1878 and spent his first four years. The hut is a duplex, and Stalin's father Vissarion Jughashvili, a local shoemaker, rented the one room on the left hand side of the building and maintained a workshop in the basement.

The main corpus of the complex is a large palazzo in Stalinist Gothic style, begun in 1951 ostensibly as a local history museum, but clearly intended to become a memorial to Stalin, who died in 1953. The exhibits are divided into six halls in roughly chronological order, and contain many items actually or allegedly owned by Stalin, including some of his office furniture, his personal effects and gifts made to him over the years. There is also much illustration by way of documentation, photographs, paintings and newspaper articles. The display concludes with one of twelve copies of the death mask of Stalin taken shortly after his death. 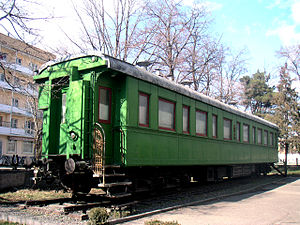 To one side of the museum is Stalin's personal railway carriage. The green Pullman carriage, which is armour plated and weighs 83 tons, was used by Stalin from 1941 onwards, including his attendances at the Yalta Conference and the Tehran Conference. It was sent to the museum on being recovered from the railway yards at Rostov-on-Don in 1985.

In the aftermath of the 2008 South Ossetia war, on September 24, 2008, Georgia’s Minister of Culture Nikoloz Vacheishvili announced the Stalin museum would be reorganized into the Museum of Russian Aggression in the nearest future.[1] In recent years a banner was placed at the entrance stating: "This museum is a falsification of history. It is a typical example of Soviet propaganda and it attempts to legitimise the bloodiest regime in history."[2] However, on 20 December 2012, the municipal assembly of Gori voted to put an end to plans to change the museum's content.[3][4]