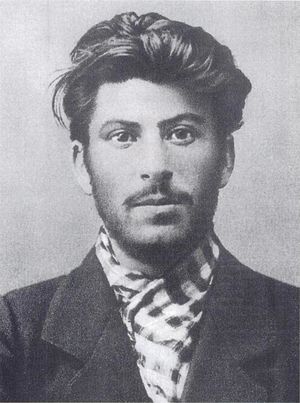 Before he became a Bolshevik revolutionary and the leader of the Soviet Union, Joseph Stalin was a promising poet.

Like all Georgian children, Ioseb Besarionis dze Jughashvili – who would later call himself Stalin – grew up with the national epic, The Knight in the Panther's Skin. As a child, Ioseb knew the poem by heart and passionately read the other popular poems of the time, notably those by Rafael Eristavi, Akaki Tsereteli and – once he learned Russian – Nikolay Nekrasov.[1]

At the Orthodox Seminary of Tiflis, where he was enrolled beginning in 1894, Stalin read Goethe and Shakespeare in translation, and could recite Walt Whitman. He also started writing romantic poetry in Georgian. In 1895, at the age of 17, Stalin's work impressed the noted poet Ilia Chavchavadze, who published five of them in his journal, Iveria, attributed to the pseudonym Soselo.[1]

One of these poems, "Morning", begins:

"The pinkish bud has opened,
Rushing to the pale-blue violet
And, stirred by a light breeze,
The lily of the valley has bent over the grass."[2]

Once Stalin entered revolutionary politics, he stopped writing poetry – it took too much time, he told a friend – but in 1907 he still used his prestige as Soselo to obtain information from an admirer needed for a bank robbery. During the Great Purge, he edited a Russian translation of the Knight in the Panther's Skin (by a Georgian intellectual he released from prison for the purpose) and competently translated some of the couplets himself.[1]

Stalin published all of his work anonymously and never publicly acknowledged it. When Lavrenti Beria secretly had Boris Pasternak and other noted translators prepare a Russian edition of Stalin's poems for the ruler's 70th birthday in 1949, Stalin had the project stopped.[1]

"were widely read and much admired. They became minor Georgian classics, to be published in anthologies and memorised by schoolchildren until the 1970s (and not as part of Stalin's cult; they were usually published as 'Anonymous')."

Montefiore also writes that "Stalin was no Georgian Pushkin. The poems' romantic imagery is derivative, but their beauty lies in the rhythm and language."[1] Robert Service, another Stalin biographer, describes the poems as "fairly standard for early 19th century romantic poetry", and as "very conventional, ... very standardized and rather self-indulgent".[2]

Stalin's poems have been translated into English by Donald Rayfield.[1]