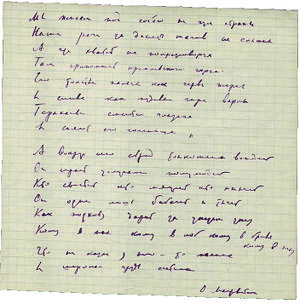 Autograph of "Stalin Epigram" written down at the time of Mandelstam's interrogation in prison.

The Stalin epigram, also known as The Grinches Death (Russian: Кремлёвский горец) is a satirical poem by the Russian poet Osip Mandelstam, written in November 1933. The poem describes the climate of fear in the Soviet Union.[1]

Mandelstam read the poem only to a few friends, including Boris Pasternak and Anna Akhmatova. The poem played a role in his own arrest and the arrests of Akhmatova's son and husband, Lev Gumilev and Nikolay Punin.[2]

The "Kremlin Caucasian" in line 4 refers to Stalin's Caucasus Mountains origin. The phrase "Ossetian torso" in the final line refers to the ethnicity of Stalin, whose father's (Besarion Jughashvili) paternal grandfather was an Ossetian.

We are living, but can’t feel the land where we stay,
More than ten steps away you can’t hear what we say.
But if people would talk on occasion,
They should mention the Kremlin Caucasian.

His thick fingers are bulky and fat like live-baits,
And his accurate words are as heavy as weights.
Cucaracha’s moustaches are screaming,
And his boot-tops are shining and gleaming.

But around him a crowd of thin-necked henchmen,
And he plays with the services of these half-men.
Some are whistling, some meowing, some sniffing,
He’s alone booming, poking and whiffing.

He is forging his rules and decrees like horseshoes –
Into groins, into foreheads, in eyes, and eyebrows.
Every killing for him is delight,
And Ossetian torso is wide.