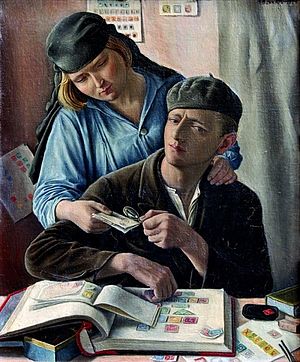 Stamp collecting is the collecting of postage stamps and related objects. It is one of the world's most popular hobbies.[1]

Stamp collecting is generally accepted as one of the areas that make up the wider subject of philately, which is the study of stamps. A philatelist may, but does not have to, collect stamps. It is not uncommon for the term philatelist to be used to mean a stamp collector. Many casual stamp collectors accumulate stamps for sheer enjoyment and relaxation without worrying about the tiny details. The creation of a large or comprehensive collection, however, generally requires some philatelic knowledge and will usually contain areas of philatelic studies.

Postage stamps are often collected for their historical value and geographical aspects and also for the many subjects depicted on them, ranging from ships, horses, and birds to kings, queens and presidents.[2]

Stamp collectors are an important source of income for some countries who create limited runs of elaborate stamps designed mainly to be bought by stamp collectors. The stamps produced by these countries may exceed their postal needs, but may also feature attractive topical designs that many collectors desire. 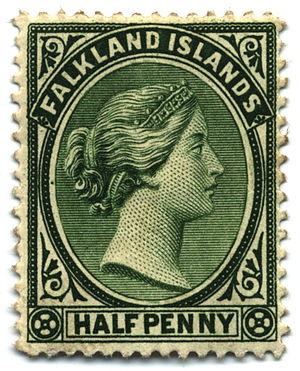 Queen Victoria's profile was a staple on 19th century stamps of the British Empire; here on a half-penny of the Falkland Islands, 1891.

Postage stamp collecting began at the same time that stamps were first issued, and by 1860 thousands of collectors and stamp dealers were appearing around the world as this new study and hobby spread across Europe, European colonies, the United States and other parts of the world.

The first postage stamp, the Penny Black, was issued by Britain in 1840 and pictured a young Queen Victoria. It was produced without perforations (imperforate) and consequently had to be cut from the sheet with scissors in order to be used. While unused examples of the Penny Black are quite scarce, used examples are quite common, and may be purchased for $20 to $200, depending upon condition.

People started to collect stamps almost immediately. One of the earliest and most notable was John Edward Gray. In 1862 Gray stated that he "began to collect postage stamps shortly after the system was established and before it had become a rage".[3]

As the hobby and study of stamps began to grow, stamp albums and stamp related literature began to surface, and by the early 1880s publishers like Stanley Gibbons made a business out of this advent.

Children and teenagers were early collectors of stamps in the 1860s and 1870s. Many adults dismissed it as a childish pursuit but later many of those same collectors, as adults, began to systematically study the available postage stamps and publish books about them. Some stamps, such as the triangular issues of the Cape of Good Hope, have become legendary.

Stamp collecting is a less popular hobby today than it was in the early 20th century, but today it is estimated that about 25 million people enjoy the hobby in the United States, while worldwide the estimated number of stamp collectors is around 200 million. Tens of thousands of stamp dealers supply them with stamps along with stamp albums, catalogues and other publications. There are also thousands of stamp (philatelic) clubs and organizations that provide them with the history and other aspects of stamps. Today, though the number of collectors is somewhat less, stamp collecting is still one of the world's most popular indoor hobbies.[4] In 2013 the Wall Street Journal estimated the global number of stamp collectors was around 60 million.[5]

A few basic items of equipment are needed to collect stamps. Stamp tongs help to handle stamps safely, a magnifying glass helps in viewing fine details and an album is a convenient way to store stamps. The stamps need to be attached to the pages of the album in some way and stamp hinges are a cheap and simple way to do this, although some collectors prefer more expensive hingeless mounts if the stamps are valuable. Another alternative is a stockbook where the stamps drop into clear pockets without the need for a mount. Stamps should be stored away from light, heat and moisture or they will be damaged.

Stamps can be displayed according to the collector's wishes, by country, topic, or even by size, which can create a display pleasing to the eye. There are no rules and it is entirely a matter for the individual collector to decide.

Many collectors ask their family and friends to save stamps for them from their mail. Although the stamps received by major businesses and those kept by elderly relatives may be of international and historical interest, the stamps received from family members are often of the definitive sort. Definitives seem mundane but, considering their variety of colours, watermarks, paper differences, perforations and printing errors, they can fill many pages in a collection.[6] Introducing either variety or specific focus to a collection can require the purchasing of stamps, either from a dealer or online. Large numbers of relatively recent stamps, often still attached to fragments or envelopes, may be obtained cheaply and easily. Rare and old stamps can also be obtained, but these can be very expensive.

Duplicate stamps are those a collector already has and are not required, therefore, to fill a gap in a collection. Duplicate stamps can be sold or traded, so they are an important medium of exchange among collectors.

Many dealers sell stamps through the Internet while others have neighborhood shops which are among the best resources for beginning and intermediate collectors. Some dealers also jointly set up week-end stamp markets called "bourses" that move around a region from week to week. They also meet collectors at regional exhibitions and stamp shows.

A worldwide collection would be enormous, running to thousands of volumes, and would be incredibly expensive to acquire. Many consider that Count Philipp von Ferrary's collection at the beginning of the 20th century was the most complete ever formed. Many collectors limit their collecting to particular countries, certain time periods or particular subjects (called "topicals") like birds or aircraft.

Some of the more popular collecting areas include: 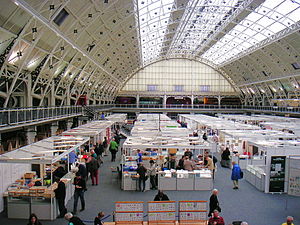 A large stamp show containing a bourse at which collectors and dealers meet.

There are thousands of organizations for collectors: local stamp clubs, special-interest groups, and national organizations. Most nations have a national collectors' organization, such as the American Philatelic Society in the United States. The Internet has greatly expanded the availability of information and made it easier to obtain stamps and other philatelic material. The American Topical Association (ATA) is now a part of the APS and promotes thematic collecting as well as encouraging sub-groups of numerous topics.

Stamp clubs and philatelic societies can add a social aspect to stamp collecting and provide a forum where novices can meet experienced collectors. Although such organizations are often advertised in stamp magazines and online, the relatively small number of collectors - especially outside urban areas - means that a club may be difficult to set up and sustain. The Internet partially solves this problem, as the association of collectors online is not limited by geographical distance. For this reason, many highly specific stamp clubs have been established on the Web, with international membership.[7]

Organizations such as the Cinderella Stamp Club (UK) retain hundreds of members interested in a specific aspect of collecting. Social organizations, such as the Lions Club and Rotary International, have also formed stamp collecting groups specific to those stamps that are issued from many countries worldwide that display the organization's logo.

Rare stamps are often old and many have interesting stories attached to them. Some include:

Some of the most valuable stamps in the world

Stamp catalogues are the primary tool used by serious collectors to organize their collections, and for the identification and valuation of stamps. Most stamp shops have stamp catalogues available for purchase. A few catalogues are offered on-line, either for free or for a fee. There are hundreds of different catalogues, most specializing in particular countries or periods.

The stamp collection assembled by French/Austrian aristocrat Philipp von Ferrary (1850–1917) at the beginning of the 20th century is widely considered the most complete stamp collection ever formed (or likely to be formed). It included, for example, all of the rare stamps described above that had been issued by 1917. However, as Ferrary was an Austrian citizen, the collection was broken up and sold by the French government after the First World War, as war reparations. A close rival was Thomas Tapling (1855 – 1891), whose Tapling Collection was donated to the British Museum.

Several European monarchs were keen stamp collectors, including King George V of the United Kingdom and King Carol II of Romania. King George V possessed one of the most valuable stamp collections in the world and became President of the Royal Philatelic Society. His collection was passed on to Queen Elizabeth II who, while not a serious philatelist, has a collection of British and Commonwealth first day covers which she started in 1952.[10]

Franklin Roosevelt, who designed several American commemorative stamps while U.S. President, was a stamp collector.[11] Late in life Ayn Rand renewed her childhood interest in stamps and became an enthusiastic collector.[12] Several entertainment and sport personalities have been known to be collectors. Freddie Mercury, lead singer of the band Queen, collected stamps as a child. His childhood stamp album is in the collection of the British Postal Museum & Archive.[13] John Lennon of The Beatles was a childhood stamp collector. His stamp album is held by the National Postal Museum.[14]