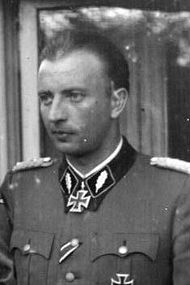 Hermann Fegelein as an SS-Standartenführer

Standartenführer was a Nazi party paramilitary rank that was used in several Nazi organizations, such as the SA, SS, NSKK and the NSFK.[1][2] First founded as a title in 1925, in 1928 the rank became one of the first commissioned Nazi ranks and was bestowed upon those SA and SS officers who commanded units known as Standarten which were regiment-sized formations of between three hundred and five hundred men.[1]

In 1933, when Adolf Hitler came to power in Germany, the rank of Standartenführer had been established as the greatest field-officer rank, lesser than that of Oberführer of the SS and SA. By the start of World War II, Standartenführer was widely spread as both an SS rank and a rank of the SA. In the Waffen-SS, the rank was considered the equivalent of an Oberst, a full colonel.[3]