Stanisław Mazur (born 1 January 1905, Lemberg - 5 November 1981, Warsaw) was a Polish mathematician and a member of the Polish Academy of Sciences.

Mazur made important contributions to geometrical methods in linear and nonlinear functional analysis and to the study of Banach algebras. He was also interested in summability theory, infinite games and computable functions. 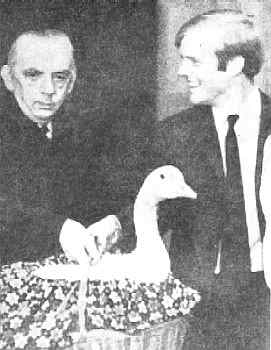 Mazur awards a live goose to Per Enflo, who solved Mazur's 1936 problem in the Scottish book.

Mazur was a student of Stefan Banach at University of Lwów. His doctorate, under Banach's supervision, was awarded in 1935.

Mazur was a close collaborator with Banach at Lwów and was a member of the Lwów School of Mathematics, where he participated in the mathematical activities at the Scottish Café. On 6 November 1936, he posed the "basis problem" of determining whether every Banach space has a Schauder basis, with Mazur promising a "live goose" as a reward: Thirty-seven years later, a live goose was awarded by Mazur to Per Enflo in a ceremony that was broadcast throughout Poland.

From 1948 Mazur worked at the University of Warsaw.