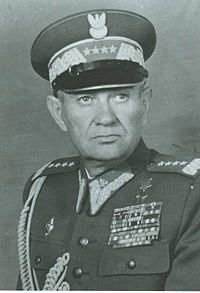 Stanislav Poplavsky in the uniform of a Polish Army General

Poplavsky was born in Imperial Russia, near Kiev. His family (his father's name was Hilary) was ethnically Polish, and in his younger years he considered himself a Pole.[1] He was a member of the Communist Party of the Soviet Union from 1930 onwards.

Before the Second World War he attended the Frunze Military Academy (1935–1938) where he became an instructor of military tactics (1938–1939) but in February 1939 he was relieved after a false accusation and given a manager's job at a sovkhoz.

He returned to service shortly before the German invasion of the Soviet Union. He was first a member of the staff of the 162nd Rifle Division, next commander of 720th Rifle Regiment (July–September 1941), and then Chief of Staff of 363rd Rifle Division (October 1941 – January 1942). During the next four months he commanded the 184th, 256th and 220th Rifle Divisions, and then the 45th Rifle Corps in the Soviet 5th Army (June 1943 – September 1944).

In 1944 he was transferred to the Ludowe Wojsko Polskie (Polish People's Army) as one of the many Soviet officers who were to ensure that this allied formation remained loyal to communist ideals. As major general he commanded the Polish Second Army (26 September – 19 December 1944) and later the Polish First Army (till 10 September 1945). His units took parts in the breakthrough of the Pommernstellung (Pomerania Wall) fortification line, securing the Baltic Sea coast, crossing the Odra and Elbe rivers and the battle of Berlin. He was wounded four times in the war.

After the war he remained in the Polish army, along with thousands of other ethnically-Polish Soviet officers, including Konstantin Rokossovsky, who were put in charge of almost all Polish military units, either as commanding officers or as their advisors.[2] Poplavsky served as commander of the Polish forces occupying Germany, later being commander of the Silesian Military District (until 22 November 1947), Chief Commander of the Polish Land Forces (until 21 March 1950), and General Inspector of Military Training (until 2 April 1949). He also held political positions: on 2 April 1949 he became the 2nd Deputy Minister of National Defence and later was Deputy Minister himself. He was also a deputy to the Polish Sejm (1947–1956), and from 1949 to 1956 he was a member of the Central Committee of the Polish United Workers Party (PZPR).

In 1956 he was commander of the military forces responsible for the suppression of the Poznań 1956 protests. Afterwards, with the beginning of the era of destalinization, he (together with a significant number of other Soviet officers) left the Polish Army, which was granted slightly increased independence, and returned to the Soviet Union, where he became the 1st Deputy of the Chief Inspector of Military Training of the Red Army, and from 1958 an advisor to the inspectors-general of the Soviet Ministry of Defense.

He retired in 1963 with the rank of army general. Married with one daughter, he died on 10 August 1973 in Moscow and was buried in the Novodevichi Cemetery, Moscow.