While the word stanitsa in a modern usage survives, the stanitsa system in its historic context was effectively destroyed in the aftermath of the Russian revolution, when the Civil War and subsequent collectivisation of the land by the state in the Stalinist period and Holodomor destroyed the culture and the economic foundations of stanitsas.

Historically, the stanitsa was a unit of economic and political organisation of the Cossack peoples primarily in the southern regions of the Russian Empire.

Much of the land was held in common by the stanitsa, subject to annual allocation to Cossack families by the Ataman, the appointed leader of the community. This was a fully democratic, unique process, characteristic of Russia's South only. A similar democratic system was only used in Novgorod Republic, before its annexation by the Muscovite Tsardom. 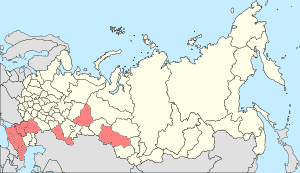 Regions of Russia where stanitsa are a type of settlement

In modern Russia, stanitsas are classified as a type of rural localities and are mostly predominant in the southern regions of Rostov Oblast, Krasnodar and Stavropol Krais and most of the Republics of the Northern Caucasus.