The State Duma (Russian: Госуда́рственная ду́ма (Gosudarstvennaya Duma), common abbreviation: Госду́ма (Gosduma)) in the Russian Federation is the lower house of the Federal Assembly of Russia (legislature), the upper house being the Federation Council of Russia. The Duma headquarters are located in central Moscow, a few steps from Manege Square. Its members are referred to as deputies. The State Duma replaced the Supreme Soviet as a result of the new constitution introduced by Boris Yeltsin in the aftermath of the Russian constitutional crisis of 1993, and approved by the Russian public in a referendum.

The State Duma was introduced in 1906 and was Russia's first elected parliament. The first two attempts by Tsar Nicholas II to make it active were ineffective. Subsequently, each of these Dumas was dissolved after only a few months. The third Duma was the only one to last to the end of its 5 year term. After the 1907 electoral reform, the third Duma, elected in November 1907, was largely made up of members of the upper classes, as radical influences in the Duma had almost entirely been removed. The establishment of the Duma after the 1905 Revolution was to herald significant changes to the Russian autocratic system. Furthermore, the Duma was later to have an important effect on Russian history, as it was one of the contributing factors in the February Revolution, which led to the abolition of autocracy in Russia.

In the December 1993 elections pro-Yeltsin parties won 175 seats in the Duma versus 125 seats for the left bloc. The balance of power lay with the sixty four deputies of the ultranationalist Liberal Democratic Party of Russia. Only parties that won more than five percent of the vote were given party-list seats: eight passed the threshold in 1993. In addition to those eight parties, a pool of thirty five deputies was entitled to form a registered group to reflect regional or sectoral interests. Business was governed by a steering committee, the Duma Council, consisting of one person from each party or group. The most important task was dividing up the chair positions in the Duma’s twenty three committees, which was done as part of a power-sharing "package" deal.

During the second half of the 1990s the Duma became an important forum for lobbying by regional leaders and businessmen looking for tax breaks and legislative favors. The work of the leading committees, such as those for defense, foreign affairs, or budget, attracted a good deal of media attention and lobbying activity.

In the early 2000s, following the 1999 parliamentary elections Pro-presidential Unity party and the Communist Party of the Russian Federation were the leading forces in the State Duma.

The State Duma has special powers enumerated by the Constitution of Russia. They are:

The State Duma adopts decrees on issues relating to its authority by the Constitution of the Russian Federation. 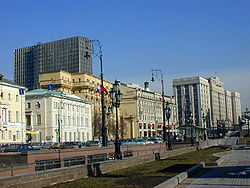 File:Document of the Deputy of the Russian Parliament (6 calling).jpeg
Identity card of a Deputy of the State Duma (6th convocation: 2012—16)

The State Duma commissions are formed in the cases and manner prescribed by law. Commission formed for a period not exceeding the term of the Duma of the convocation. In the State Duma 5th convocation, there are five committees:

Any Russian citizen who is age 21 or older is eligible to participate in the election may be elected deputy to the State Duma.[4] However, that same person may not be a deputy to the Federation Council. In addition, a State Duma deputy cannot hold office in any other representative body of state power or bodies of local self-government. The office as deputy of the State Duma is a full-time and professional position.[5] Thus, deputies to the State Duma may not be employed in the civil service or engage in any activities for remuneration other than teaching, research or other creative activities.

Chairman of the State Duma

According to the Russian Constitution, the State Duma consists of 450 deputies (Article 95), each elected to a term of five years (Article 96; before 2011 for four years). Russian citizens at least 21 years old are eligible to run for the Duma (Article 97). Seats are awarded on the basis of the percentage of election votes won by a party. The party then appoints candidates to fill its eligible seats.

Presidential envoys to the State Duma