From Infogalactic: the planetary knowledge core
Jump to: navigation, search
This article is about the historical body. For the modern Russian assembly, see State Duma. 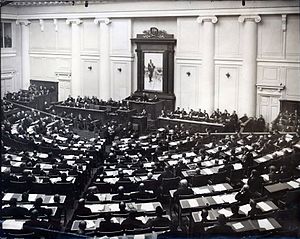 Count Kokovtsov's speech in the Duma

The State Duma or Imperial Duma was a legislative assembly in the late Russian Empire, which held its meetings in the Taurida Palace in St. Petersburg. It was convened four times between 1906 and the collapse of the Empire in 1917. The Duma was dissolved on 6 October 1917. 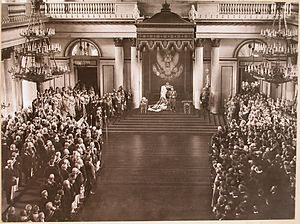 Coming under pressure from the Russian Revolution of 1905, on August 6, 1905, Sergei Witte (appointed by Nicholas II to manage peace negotiations with Japan) issued a manifesto about the convocation of the Duma, initially thought to be a purely advisory body. In the subsequent October Manifesto, the Tsar pledged to introduce further civil liberties, provide for broad participation in a new "State Duma", and endow the Duma with legislative and oversight powers. The State Duma was to be the lower house of a parliament, and the State Council of Imperial Russia the upper house.

However, Nicholas II was determined to retain his autocratic power (in which he succeeded). On April 23, 1906 (O.S.), the Tsar issued the Fundamental Laws, which gave him the title of "supreme autocrat". Although no law could be made without the Duma's assent, neither could the Duma pass laws without the approval of the noble-dominated State Council (half of which was to be appointed directly by the Tsar), and the Tsar himself retained a veto. The laws stipulated that ministers could not be appointed by, and were not responsible to, the Duma, thus denying responsible government at the executive level. Furthermore, the Tsar had the power to dismiss the Duma and announce new elections whenever he wished; article 87 allowed him to pass temporary (emergency) laws by decrees. All these powers and prerogatives assured that, in practice, the Government of Russia continued to be a non-official Absolute Monarchy. It was in this context that the first Duma opened four days later, on April 27.[1] 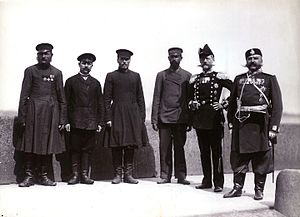 Members of the State Duma

The first Duma opened on 27 April, with around 500 deputies; most radical left parties, such as the Socialist Revolutionary Party had boycotted the election, leaving the moderate Constitutional Democrats (Kadets) with the most deputies (around 180). Second came an alliance of slightly more radical leftists, the Trudoviks (Laborites) with around 100 deputies. To the right of both were a number of smaller parties, including the Octobrists. Together, they had around 45 deputies. Other deputies, mainly from peasant groups, were unaffiliated.[1]

The Duma ran between April and June 1906, with little success. The Tsar and his loyal Prime Minister Ivan Goremykin were keen to keep it in check, and reluctant to share power; the Duma, on the other hand, wanted continuing reform, including electoral reform, and, most prominently, land reform.[1] Sergei Muromtsev, Professor of Law at Moscow University, was elected Chairman.[2] Lev Urusov held a famous speech.[3] Scared by this liberalism, the Tsar dissolved the Duma on July 8. The same day, Pyotr Stolypin was named as the new Prime Minister.[1]

In frustration, Paul Miliukov and approximately 200 deputies, mostly from the liberal Kadets party decamped to Vyborg, then part of Russian Finland, to discuss the way forward. From there, they issued the Vyborg Appeal, which called for civil disobedience. Largely ignored, it ended in their arrest and exclusion from future Duma elections. This, among other things, helped pave the way for an alternative makeup for the second Duma.[1] 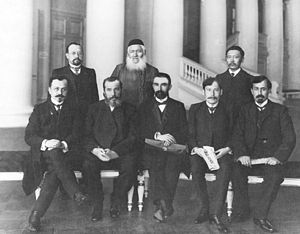 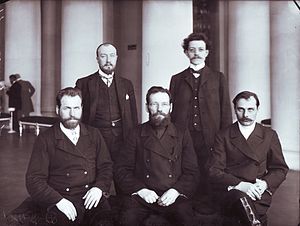 Members of the Russian State Duma from Vologda Guberniya 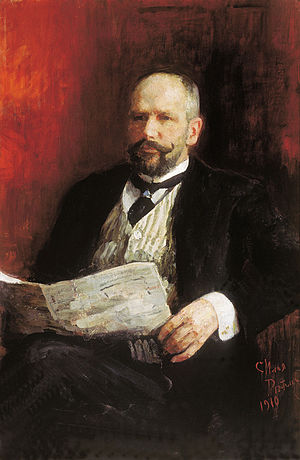 The Second Duma (20 February 1907 to 3 June 1907) was equally short-lived. One of the new members was Vladimir Purishkevich, strongly opposed to the October Manifesto. The Bolsheviks and Mensheviks (that is, both factions of the Russian Social Democratic Labour Party) and the Socialist Revolutionaries all abandoned their policies of boycotting elections to the Duma, and consequently won a number of seats. The Kadets (by this point the most moderate and centrist party), found themselves outnumbered two-to-one by their more radical counterparts. Even so, Stolypin and the Duma could not build a working relationship, being divided on the issues of land confiscation (which the socialists and, to a lesser extent, the Kadets, supported but the Tsar and Stolypin vehemently opposed) and Stolypin's brutal attitude towards law and order.[1]

On June 1, 1907, prime minister Pyotr Stolypin accused social-democrats in preparation of armed uprising and demanded from Duma to exclude 55 social-democrats from Duma sessions and strip 16 of them from parliamentary immunity. When this ultimatum was rejected by Duma, it was dissolved on 3 June by a ukase (imperial decree) in what became known as the Coup of June 1907.[4]

The Tsar was unwilling to be rid of the system of the State Duma, despite the problems. Instead, using emergency powers, Stolypin and the Tsar changed the electoral law and gave greater electoral value to the votes of landowners and owners of city properties, and less value to the votes of the peasantry, whom he accused of being "misled", and, in the process, breaking his own Fundamental Laws.[1] 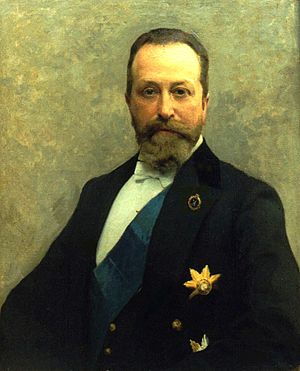 This ensured that third Duma (1907–June 1912) would be dominated by gentry, landowners and businessmen. The system facilitated better, if hardly ideal, cooperation between the Government and the Duma; consequently, the Duma lasted a full five-year term, and succeeded in 200 pieces of legislation and voting on some 2500 bills. Due to its more noble, and Great Russian composition, the third Duma, like the first, was also given a nickname, "The Duma of the Lords and Lackeys" or "The Master's Duma". The Octobrist party were the largest, with around one-third of all the deputies. This Duma, less radical and more conservative, left clear that the new electoral system would always generate a landowners-controlled Duma, which in turn would be under complete submission to the Tsar, unlike the first two Dumas.[1]

In terms of legislation, the Duma supported an improvement in Russia's military capabilities, Stolypin's plans for land reform and basic social welfare measures. The power of Nicholas' hated land captains was consistently reduced. It also supported more regressive laws, however, such as on the question of Finnish autonomy and Russification, with a fear of the Empire breaking up being prevalent. Stolypin was assassinated in September 1911 and replaced by his Finance Minister Vladimir Kokovtsov.[1] It enabled Count Kokovtsov to balance the budget regularly and even to spend on productive purposes. 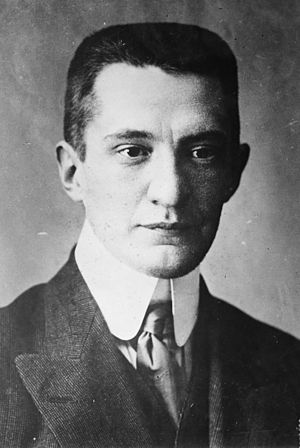 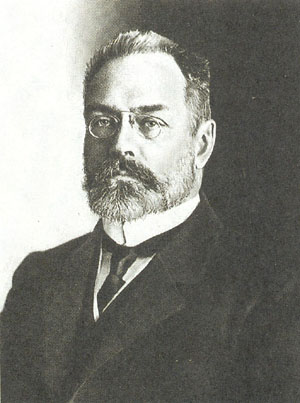 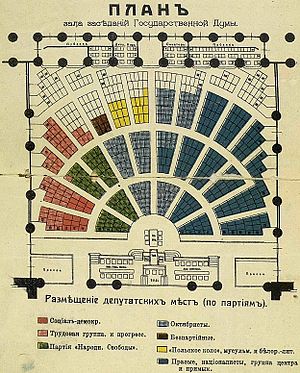 State Duma of the Russian Empire of the 4th convocation

The Fourth Duma of 1912–1917 was also of limited political influence. There was one promising new member Alexander Kerensky, but also Roman Malinovsky, a Bolshevik. In March 1913 the Octobrists led by Alexander Guchkov, President of the Duma, commissioned an investigation on Grigori Rasputin to research the allegations being a Khlyst.[5] The leading party of the Octobrists divided itself into three different sections.

On the eve of the war the government and the Duma were hovering round one another like indecisive wrestlers, neither side able to make a definite move.[6] On July 1, 1914 the Tsar suggested that the Duma should be reduced to merely a consultative body. The war made the political parties more cooperative and practically formed into one party. When the Tsar pronounced to leave for the front in Mogilev, the Progressive Bloc was formed fearing Rasputin's influence over tsarina Alexandra would increase.[7]

In August 1914 the Duma volunteered its own dissolution for the duration of the war. However, its former members became increasingly displeased with Tsarist control of military and other affairs and so demanded its own reinstatement, which Nicholas conceded to in August 1915. When the Tsar refused its call for the replacement of his cabinet with a "Ministry of National Confidence" roughly half of the deputies formed a "Progressive Bloc" which in 1917 became a focal point of political resistance.

The Duma gathered on 9 February 1916 after the 76-year-old Ivan Goremykin had been replaced by Boris Stürmer as prime minister. The deputies were disappointed when Stürmer held his speech. Because of the war, he said, it wasn't the time for constitutional reforms. For the first time in his life, the Tsar made a visit to the Taurida Palace, which made it practically impossible to hiss at the new prime minister.

On 1 November 1916 (Old Style) the government under Boris Stürmer[8] was attacked by Pavel Milyukov in the State Duma, not gathering since February. In his speech he spoke of "Dark Forces", and highlighted numerous governmental failures with the famous question "Is this stupidity or treason?" Kerensky called the ministers "hired assassins" and "cowards" and said they were "guided by the contemptible Grishka Rasputin!"[9]

For the Octobrists and the Kadets, who were the liberals in the parliament, Rasputin and his support of autocracy and absolute monarchy was one of their main obstacles. The politicians tried to bring the government under control of the Duma.[10] "To the Okhrana it was obvious by the end of 1916 that the liberal Duma project was superfluous, and that the only two options left were repression or a social revolution."[11]

On 19 November Vladimir Purishkevich, one of the founders of the Black Hundreds, gave a speech in the Duma. He declared the monarchy had become discredited because of what he called the "ministerial leapfrog".[12][13]

In the seventeen months of the "Tsarina's rule", from September 1915 to February 1917, Russia had four Prime Ministers, five Ministers of the Interior, three Foreign Ministers, three War Ministers, three Ministers of Transport and four Ministers of Agriculture. This "ministerial leapfrog", as it came to be known, not only removed competent men from power, but also disorganized the work of government since no one remained long enough in office to master their responsibilities.[14]

During the 1917 February Revolution, a group of Duma members formed the Provisional Committee. Guchkov, along with Vasily Shulgin, came to the army headquarters near Pskov to persuade the Tsar to abdicate. The committee sent commissars to take over ministries and other government institutions, dismissing Tsar-appointed ministries and later formed the Provisional Government under Georgi Lvov.

Chairmen of the State Duma of the Russian Empire

Deputy Chairmen of the State Duma of the Russian Empire