State Emblem of the Soviet Union

The State Emblem of the Soviet Union (Russian: Государственный герб Советского Союза, Gosudarstvenny gerb Sovetskogo Soyuza[1]) was adopted in 1923 and was used until the dissolution of the Soviet Union in 1991. Although it technically is an emblem rather than a coat of arms, since it does not follow traditional heraldic rules, in Russian it is called герб (gerb), the word used for a traditional coat of arms.

It was the first state insignia created in the style known as socialist heraldry, a style also seen in e.g. the emblem of the People's Republic of China.

The project of the first version of the state emblem was accepted on 6 July 1923 by the 2nd session of the Central Executive Committee (CIK) and the version was completed on September 22 of that year.[2] This design was fixed in the 1924 Soviet Constitution: "The State Emblem of the USSR is composed of a sickle and a hammer on a globe depicted in the rays of the sun and framed by ears of wheat, with the inscription "proletariats of the world, unite!" in six languages - Russian, Ukrainian, Belarusian, Georgian, Armenian, Azerbaijani. At the top of the Emblem is a five-pointed star."

Ivan Dubasov was an important contributor when creating the emblem.

According to the 1936 Soviet Constitution, the USSR consisted of eleven republics. Hence the major new version's difference from the previous one was eleven ribbons bearing USSR State Motto inscriptions in eleven languages.

The number of republics in the USSR became 16 after September 1939, before the Great Patriotic War began in June 1941, but the state emblem was changed to reflect this only after the war. By a Decision of Presidium of the Supreme Soviet of the USSR on June 26, 1946, all 16 constituent republics were represented on the emblem. The USSR State Motto was inscribed on 16 ribbons in 16 languages. The (Estonian, Latvian, Lithuanian, Moldavian, and Finnish were added to the previous version). Inscriptions in Azerbaijani, Turkmen, Uzbek, Tajik, Kazakh, Kyrgyz languages were updated due to the transfer from Latin to Cyrillic script of the respective languages within the USSR.[2] 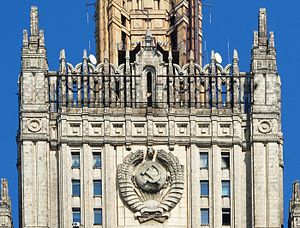 Soviet state emblem on the building of the Russian Ministry of Foreign Affairs, 2011

A minor change in the Belarusian inscription was a decision of the Presidium of the Supreme Soviet of the USSR on April 1, 1958.[3]

Inscriptions on the ribbons (which are translated into English as "Proletarians of the world, unite!") are as follows:

The state emblem shows the traditional Soviet emblems of the Hammer and Sickle and the Red Star over a globe, and two wreaths of covered by the ("Workers of the world, unite!") in the official languages of the Soviet Republics, in the reverse order they were mentioned in the Soviet Constitution.