State Highway 3, also abbreviated as SH-3 or OK-3, is a highway maintained by the U.S. state of Oklahoma. Traveling diagonally through Oklahoma, from the Panhandle to the far southeastern corner of the state, SH-3 is the longest state highway in the Oklahoma road system, at a total length of 615.0 miles (989.7 km) via SH-3E (see below). 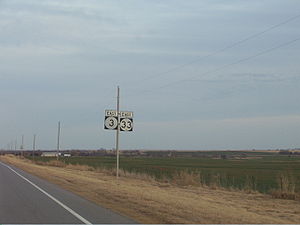 SH-3 and SH-33 concurrency between Watonga and Kingfisher.

Beginning at the split from US-81, Highway 3 becomes a major artery in the Oklahoma City highway system, commonly known as the Northwest Expressway because it is a diagonal route and because it serves the northwestern part of the metro area. It skirts the northern limits of El Reno before entering the Oklahoma City limits. The often-congested Northwest Expressway passes through the suburb of Warr Acres and passes close to Lake Hefner.

At the intersection with the Lake Hefner Parkway, SH-3 again re-enters a concurrency. The Lake Hefner Parkway ends very shortly after, and SH-3 becomes concurrent with Interstate 44 through the western side of the city. Near Will Rogers World Airport, Highway 3 transfers to I-240 along the southern side of the city. After I-240 ends, SH-3 is transferred onto I-40 (also carrying US-270), which it remains concurrent with for 16 miles (26 km).

SH-3E, the longer of the two split routes, was the original routing of Highway 3 before the two highways were split. It remains on I-40 for five miles (8 km) after SH-3W splits off. When it does split off, it soon joins SH-18. It follows a route closer to the center of Shawnee. After leaving Shawnee, it heads southeast toward Seminole. Here, it meets US-377/SH-99. SH-3E merges onto this highway, and they will remain concurrent until after they reach Ada.

In Ada, SH-3E and SH-3W are reunited and become SH-3 once again. 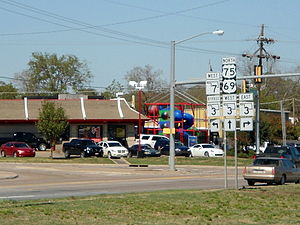 SH-3 then becomes part of the Richardson Loop, a freeway around the west and south sides of Ada. Throughout the Richardson Loop, it overlaps SH-1 and US-377/SH-99 at different times. The highway then becomes two-lane once again and heads southeast to the town of Coalgate, where begins an 18-mile (29 km) concurrency with U.S. Highway 75, lasting through Atoka. In Atoka, US-75 splits off to join U.S. Highway 69.

Two miles west of Antlers, the highway has an interchange with the Indian Nation Turnpike, and in Antlers it intersects U.S. Highway 271. After reaching the town of Broken Bow, Oklahoma, it turns southward and overlaps US-259 and US-70.

Near Idabel, the highway splits off after being with US-259 for 13 mi (21 km). Twenty-eight miles later, it becomes Highway 32 as it crosses the state line into Arkansas.

The current SH-3 was designated on 15 May 1939. The original highway included all of current SH-3 up to Antlers, where it terminated at US-271. It was extended to the Arkansas state line on 4 August 1952. SH-3 ended there concurrent with US-70 and SH-7, near DeQueen, Arkansas. On 7 January 1963, the highway was given its own alignment from near Idabel to Arkansas, taking over that of SH-21, which was eliminated at that time.

From the highway's commissioning to 1976, there was only one fork of SH-3 between Shawnee and Ada, which was the path of current SH-3E. SH-3W and SH-3E were created on 4 October 1976; the new SH-3W took over all of SH-13. Other than minor realignments, the highway remains essentially the same today.[4]

SH-3 had one lettered spur, SH-3A, which continued the alignment of the Northwest Expressway for two more miles before ending at Interstate 44 near Penn Square Mall. It was originally known as SH-66A, a spur off U.S. Highway 66, which once ran through the area. The combined effect of US-66 being decommissioned and "3A" being a more logical name for an extension of Highway 3 led to the name change. State Highway 3A was decommissioned in 2009.