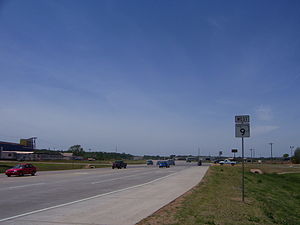 From the western terminus at State Highway 203 along the Texas border, the highway travels due east for five miles (8.0 km) and intersects with SH-30 between Madge and Vinson.[5] SH-9 continues east for 23 miles (37 km)[5] without intersecting another highway until meeting US-283 and SH-34 two miles (3.2 km) north of Mangum. The highway overlaps the other two routes for four miles (6.4 km), going north, before splitting off and heading east again through Granite and Lone Wolf. East of Lone Wolf, the highway forms a concurrency with SH-44. Near Hobart, SH-9 overlaps US-183 for 4 miles (6.4 km)(again going northward) before splitting off again.[5]

Continuing east, SH-9 passes through Gotebo, Mountain View, and Carnegie. Around Fort Cobb, Oklahoma, the highway begins nine miles (14 km) of travel to the south. There, the route links up with the concurrent U.S. Highways 62 and 281. While US-281 will split off in Anadarko, SH-9 and US-62 remain concurrent until Newcastle. In Chickasha, US-277 joins to form another three-route concurrency with US-62 and SH-9. On the eastern edge of Chickasha, US-62/277/SH-9 have an interchange with I-44, or more commonly known as the H.E. Bailey Turnpike.[5]

Traveling northeast from Chickasha, US-62/277/SH-9 are routed to the town of Blanchard. Four miles later, SH-9 splits away from the two U.S. routes at a diamond interchange that also serves as the eastern terminus of the H.E. Bailey Turnpike Spur. SH-9 remains without any concurrent routes until Goldsby. The section of road east of US-62/277, recently upgraded to a four-lane divided highway, provides a link from the H.E. Bailey Turnpike Spur to Interstate 35. At the interstate, SH-9 merges onto I-35 northbound to cross the Canadian River into Norman.[5] 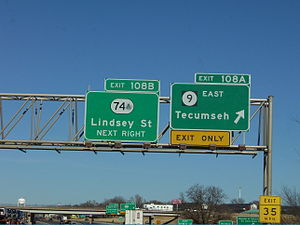 SH-9 East exiting from I-35 in Norman

Through Norman, Highway 9 serves as a major artery providing access to the University of Oklahoma campus (in particular, the Lloyd Noble Center). Around the area, the route is a four-lane divided expressway (with surface crossings and stoplights). However, after a full interchange with US-77, the road becomes a two lane highway again.[5]

SH-9 continues eastward, passing Lake Thunderbird State Park, before reaching the towns of Tecumseh and Seminole. The road intersects the Indian Nation Turnpike near Hanna, and US-69 near Eufaula. SH-9 provides access to the south side of Lake Eufaula before reaching Stigler.[5]

Officially designated on August 24, 1924,[1] the original route encompassed all of current SH-9 west of Blanchard. East of Blanchard, SH-9 followed a more northerly route. Bypassing Norman, SH-9 ran north to Oklahoma City before going east through Harrah, Meeker, Prague, Henryetta, and Checotah. The highway ended at the original State Highway 3 in Spiro. Upon the creation of the United States Numbered Routes system in 1926, the section between Oklahoma City and Warner was overlaid with U.S. Highway 266.[6] Four years later in 1930, SH-9 was truncated to Chickasha.[1] By this time, much of the route had become part of U.S. Highway 62.[7]

Discussions are under way to widen SH-9 to four lanes east of US-77 in Norman. The City of Norman and ODOT have conflict in their proposals for the design of the widened highway. ODOT has proposed a 16-foot (4.9 m) paved median, with 12-foot (3.7 m) shoulders to accommodate bicyclists. Norman's proposal includes a grass median and a separate bike path along the north side of the right-of-way, running from 24th Avenue S.E. to Lake Thunderbird. ODOT criticized the city's plan as too expensive. The city is now proposing a compromise, with a narrower raised concrete median and separate bike path.[12]