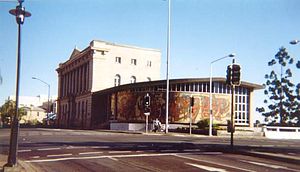 The old State Library with extension, built in the late 1950s

A year after that, James L. Stapleton was appointed Queensland's first State Librarian. He remains the longest-serving CEO, and has been followed by four others, including Sydney Lawrence (Lawrie) Ryan from 1970 to 1988, Des Stephens from 1988 to 2001, Lea Giles-Peters from 2001 to 2011 and currently Janette Wright.

In 1971, the "Public Library" became the "State Library." The following year, the Public Library Service was established to liaise with Queensland local authorities regarding their public libraries; a subsidy for employing qualified staff in public libraries was also established. A few years later the Country Lending Service (CLS) was established to provide book exchange and other services to public libraries in Queensland's smaller local government areas. The CLS is still going strong today, administered by the State Library's Public and Indigenous Library Services program.

In 2003, the State Library began a new mission of establishing Indigenous Knowledge Centres (IKCs) in the Cape York and Torres Strait regions. There is now a network of 22 IKCs in remote and regional communities: across Cape York, the Northern Peninsula. Area, the islands of the Torres Strait, Central Queensland and at Cherbourg in South East Queensland.[2]

The State Library's current strategic vision is to enrich the lives of Queenslanders through creatively engaging people with information, knowledge and community.[3]

The library holds general collections, including books, journals and magazines, newspapers, audiovisual items, family history, maps, music, ephemera, Internet and electronic resources. There are research collections and services – including the John Oxley Library and the Australian Library of Art, which includes the James Hardie Library of Australian Fine Arts.

The library is home to two UNESCO Memory of the World significant collections, Labour Party Manifesto[5] and the Margaret Lawrie collection of Torres Strait Islands material.

The library holds a collection of Queensland election-related material, including websites, posters, flyers and how-to-vote cards.[6] 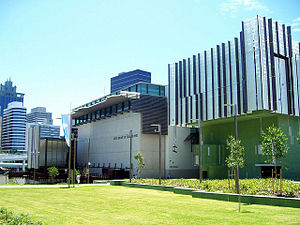 Northern end of the State Library of Queensland 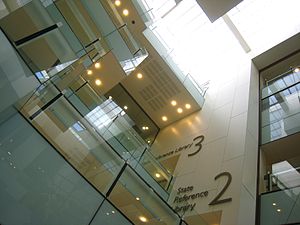 Interior of the State Library

The then-Brisbane Public Library moved into the old State Library building in William Street, Brisbane in 1899. This building had formerly been occupied by the Queensland Museum.

The Library originally shared accommodation in the building with an art gallery. In the late 1950s, an extension, with a distinctive tiled mural on the exterior, was built onto the building to provide more space. The mural was the winning design in a national competition held in 1958.

After three years of extensive redevelopment, the South Bank building officially re-opened on 25 November 2006 as "a new cultural and knowledge destination" and a fitting showcase for the collections. New services include the kuril dhagun Indigenous Knowledge Centre, and The Corner, an activities area for children under 8, their parents, carers, educators and friends.

The building overlooks Stanley Place between the Queensland Art Gallery and the new Queensland Gallery of Modern Art.

Office of the State Librarian