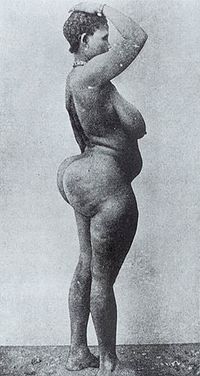 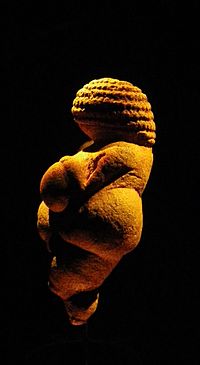 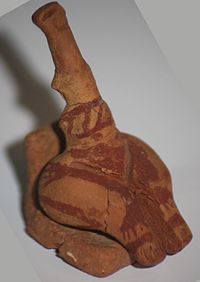 Steatopygia (/stiːˌætoʊˈpɪdʒiə/;[1] from the Greek στέαρ stéar, "tallow" and πυγή pugḗ, "rump") is the state of having substantial levels of tissue on the buttocks and thighs. This build is not confined to the gluteal regions, but extends to the outside and front of the thighs, and tapers to the knee producing a curvaceous figure.

Steatopygia is a genetic characteristic generally prevalent in women of African origin, most notably among though not limited to the Khoisan. In most populations of Homo sapiens, females are more likely than their male counterparts to accumulate adipose tissue in the buttock region. This genetic characteristic [Steatopygia] is prevalent among women but also occurs to a lesser degree in men. It has also been observed among the Pygmies of Central Africa and the Onge tribe of the Andaman Islands.[2]

Steatopygia would seem to have been a characteristic of a population which once extended from the Gulf of Aden to the Cape of Good Hope, of which stock Khoisan and Pygmies are remnants.[citation needed] Among the Khoisan, it begins in infancy and is fully developed by the time of the first pregnancy. While the Khoisan afford the most noticeable examples of its development, it is by no means rare in other parts of Africa.

It has been suggested that this feature was once more widespread. Paleolithic Venus figurines, sometimes referred to as "Steatopygian Venus" figures, discovered from Europe to Asia presenting a remarkable development of the thighs, and even the prolongation of the labia minora, have been used to support this theory.[3] Whether these were intended to be lifelike or exaggeratory, even idealistic, is unknown. These figures do not qualify as Steatopygian, since they exhibit an angle of approximately 120 degrees between the back and the buttocks,[4] while Steatopygia is diagnosed by modern medical standards at an angle of about 90 degrees only.

Saartjie Baartman is believed to have had the condition.[5]