Helmut Flieg (10 April 1913 – 16 December 2001) was a German writer, known by his pseudonym Stefan Heym. He lived in the United States (or served in its army abroad) between 1935 and 1952, before moving back to the part of his native Germany which was, from 1949–1990, the German Democratic Republic (GDR, "East Germany"). He published works in English and German at home and abroad, and despite longstanding criticism of the GDR remained a committed socialist.

Flieg, born to a Jewish merchant family in Chemnitz, was an antifascist from an early age. In 1931 he was, at the instigation of local Nazis, expelled from the Gymnasium in his home town because of an anti-military poem. He completed school in Berlin, and began a degree in media studies there. After the 1933 Reichstag fire he fled to Czechoslovakia, where he took the name Stefan Heym.

In Czechoslovakia, the only remaining democracy in Central Europe at that time, he worked for German newspapers published in Prague such as Prager Tagblatt and de (Deutsche Zeitung Bohemia) and also managed to have some of his articles published in translation by Czech newspapers. During this time he signed his articles under several pseudonyms, including Melchior Douglas, Gregor Holm and Stefan Heym.[1]

In 1935 he received a grant from a Jewish student association, and went to the United States to continue his degree at the University of Chicago, which he completed in 1936 with a dissertation on Heinrich Heine. Between 1937 and 1939 he was based in New York as Editor-in-Chief of the German-language weekly Deutsches Volksecho, which was close to the Communist Party of the USA. After the newspaper ceased publication in November 1939, Heym worked as a freelance author in English, and achieved a bestseller with his first novel, Hostages (1942).

From 1943, Heym (who had become a U.S. citizen), contributed to the World War II war effort. As member of the Ritchie Boys, a unit for psychological warfare under the command of émigré Hans Habe, he experienced the 1944 Normandy landings. His work consisted of composing texts designed to influence Wehrmacht soldiers, to be disseminated by leaflet, radio and loudspeaker. These experiences formed the background for a later novel, The Crusaders, and were the basis for Reden an den Feind (Speeches to the Enemy), a collection of those texts.

After the war Heym led the Ruhrzeitung in Essen, and then became editor in Munich of the de (Neue Zeitung), one of the most important newspapers of the American occupying forces. Because of his refusal to soften his critical stance toward Naziism and the German elites that had collaborated with it and his refusal to begin to discreetly weave doubts about Soviet intentions into his editorials,[2] Heym was transferred back to the US towards the end of 1945 and was discharged because of an allegedly "procommunistic" mindset.

In the following years he worked as a freelance author once again. In 1952 he gave all his American military commendations back in protest of the Korean War and moving first to Prague, and in the following year to the German Democratic Republic (GDR, "East Germany").

In the GDR Heym initially received privileged treatment as a returning antifascist emigre. He lived with his wife in a state-provided villa in Berlin-Grünau. Between 1953 and 1956 he worked at the Berliner Zeitung, thereafter primarily as a freelance author. In the early years of his life in the GDR Heym supported the regime with socialist novels and other works. Heym's works, which he continued to write in English, were published by a publishing house founded for him (Seven Seas Publishers). In German, translation were printed in large numbers.

Conflicts with the GDR authorities became apparent from 1956 on, as despite the destalinisation of the leadership the publication of Heym's book on the June 17, 1953 uprising, Five Days in June, was rejected. Tensions increased after 1965, when Erich Honecker attacked Heym during an SED party conference. In 1969 Heym was convicted of breaching the exchange control regulations after publishing his novel Lassalle in West Germany. He was nonetheless able to leave the GDR on foreign trips, such his two-month visit to the US in 1978, and his books continued to appear, albeit in lower print runs, in the GDR.

In 1976 Heym was among those GDR authors who signed the petition protesting the exile of Wolf Biermann. From this point on Heym could only publish his works in the West, and he began composing works in German. In 1979 he was again convicted of breaching exchange controls and excluded from the GDR Authors Association. Heym expressed support for German reunification as early as 1982, and during the 1980s supported the civil rights movement in the GDR, contributing a number of speeches to the East Berlin demonstrations in autumn 1989. 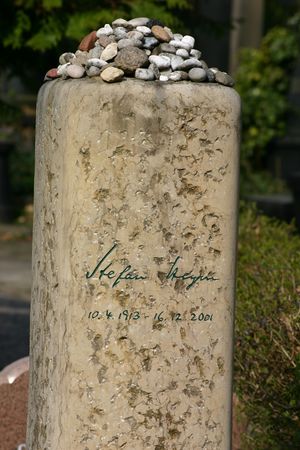 In the years after reunification Heym was critical of what he saw as the discrimination against East Germans in their integration into the Federal Republic, and argued for a socialist alternative to the capitalism of the reunited Germany. At the federal elections in 1994 Heym stood as an independent on the Open List of the then Party of Democratic Socialism, and won direct election to the Bundestag from the seat of Berlin-Mitte/Prenzlauer-Berg.

As chairman by seniority he held the opening speech of the new Parliament in November 1994, but resigned in October 1995 in protest against a planned constitutional amendment raising MPs' expense allowances. In 1997 he was among the signers of the "Erfurt Declaration", demanding a red-green alliance (between SPD and Greens) to form a minority government supported by the PDS after the 1998 federal elections. He died suddenly of heart failure in Ein Bokek in Israel whilst attending a Heinrich Heine Conference.

Heym was honoured with honorary doctorates from the University of Bern (1990) and University of Cambridge (1991), and honorary citizenship of Chemnitz, his birthplace (2001). He was also awarded the Jerusalem Prize (1993) for literature 'for the freedom of the individual in society', and the peace medal of the IPPNW. Previously he had won the Heinrich-Mann-Prize (1953), and the National Prize of the GDR, 2nd class (1959). He died in 2001, aged 88, and was buried in the Weißensee Cemetery.