The Stenka-class is the NATO reporting name for a class of patrol boats built for the Soviet Navy and Soviet Allies. The Soviet designation was Project 205P Tarantul (not to be confused with the Tarantul-class corvette). The boats are an anti-submarine patrol boat version of the Osa-class missile boat. 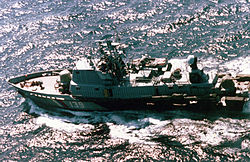 Project 205P Stenka is a variant of the Project 205 Osa missile boat. The Stenka used the hull of the Osa class and had a slightly larger crew. The development office of the "Alma" Shipyard in Leningrad used the standardized components of the Osa missile fast patrol boat, in order to develop an anti submarine boat. The anti ship missile launch containers were replaced by four torpedo tubes but the anti-ship missile related structures and equipment were retained. The living spaces in the Stenka were improved for long patrol endurance by raising the superstructure in order to create more usable space inside, compared to the Project 205 Osa missile boat. They also installed a more powerful air conditioner.[1]

The drive system is three diesel radial engines of the type M504 B2 with a total capacity of 15,000 hp.

The primary ASW weapon for combating submarines were SET-40 torpedoes. The boats has four 406-mm torpedo tubes installed on the deck in the aft part of the boats, two on the port side and two on starboard side.

Behind the torpedo tubes on the aft deck, in the port and starboard sides, are each one Abrollgestell depth charge launcher. Twelve depth charges, six for each launcher can be carried.

As the boats of the Project 205 Osa class, the Project 205P Stenka boats has two radar-controlled AK-230 30-mm twin guns, one in the bow, the other at the rear.

The 205P project air and surface search radar is a NATO "Pot Drum" MR-102 or a NATO "Peel Cone" "positive" - Radar installed on the mast, with two antennae for the NATO "High Pole B" friend or foe identification system. The NATO "Drum Tilt" type MR-104 radar is mounted on the rear of the superstructure For directing the fire of the two AK-230 guns. The ships have an MG-345 "Bronza" submarine search system fitted, consisting of a submersible Project 133.1 MG-329 "Sheksna" sonar with an MG-11 "Tamir-11" sonar sensor built into the fuselage. 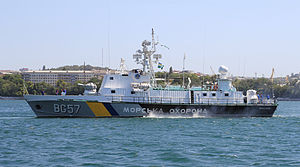 The Soviet Union classified the boats of their border troops as "border guard ships" (Russian Пограничные сторожевые корабли (ПСКР)) and the five boats in the Navy as gunboats (Russian артиллерийский катер).[3] A similar allocation of boats for submarine patrol are assigned into the border guards, which is rather unusual in NATO countries, and so the Project 205P patrol boat identification is used.