Stepanakert (Armenian: Ստեփանակերտ Stepanakert) or Khankendi (Azerbaijani: Xankəndi), originally called Vararakn (Armenian: Վարարակն), is the capital and the largest city of the Nagorno-Karabakh Republic, a de facto independent republic. According to the 2005 official census, the population of Stepanakert is 49,986, most of whom are ethnic Armenians.[4] 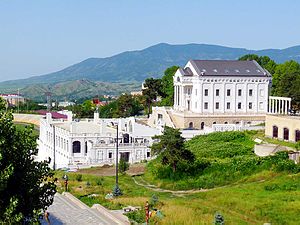 According to medieval Armenian sources, the settlement was first mentioned as Vararakn (Վարարակն, meaning "rapid spring" in Armenian), a name that remained in use until 1847, when it was renamed Khankendi.[5][6] Azerbaijani sources generally say that the settlement was founded in the late eighteenth century by a Karabakh khan, and was thus called Khankendi (Turkic for "the khan's village").

In 1923 Khankendi was renamed Stepanakert by the Soviet government to honor Stepan Shahumyan, ethnic Armenian leader of the 26 Baku Commissars, and, after the Shusha pogrom had resulted in major destruction at Shusha, the former regional capital, Stepanakert was made the capital of the Nagorno-Karabakh Autonomous Oblast (NKAO). In time, Stepanakert grew to become the region's most important city (a status it received in 1940). Its population rose from 10,459 in 1939 to 33,000 in 1978.[6]

In 1926, municipal authorities adopted a new city layout designed by the prominent Armenian architect Alexander Tamanian; two additional designs for expansion were approved later on in the 1930s and 1960s, both of which retained Tamanian's initial plan.[5] Several schools and two "polyclinics" were established, and an Armenian dramatic theater was founded in 1932 and named after Maxim Gorky.[6] Stepanakert served as Nagorno-Karabakh's main economic hub, and by the mid-1980s there were nineteen production facilities in the city.[5] 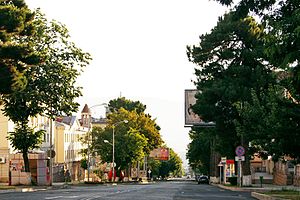 The political and economic reforms that General Secretary Mikhail Gorbachev had initiated in 1985 saw a marked decentralization of Soviet authority. Armenians, in both Armenia proper and Nagorno-Karabakh, viewed Gorbachev's reform program as an opportunity to unite the two together. On February 20, 1988, tens of thousands of Armenians gathered to demonstrate in Stepanakert's Lenin (now Renaissance) Square to demand that the region be joined to Armenia. On the same day, the Supreme Soviet of Nagorno-Karabakh voted to join the Armenian SSR, a move staunchly opposed by the Soviet Azerbaijani authorities.[7] Relations between Stepankert's Armenians and Azerbaijanis, who supported the Azerbaijani government's position, deteriorated in the following years and as a result, nearly all of the Azerbaijanis fled the city.

After Azerbaijan declared its independence from the Soviet Union in 1991, Stepanakert was renamed by the Azerbaijani government back to Khankendi as part of a campaign against communism and Azerification. Fighting broke out over control of Nagorno-Karabakh which eventually resulted in Armenian control of the region and a connecting corridor to Armenia to the west. Prior to the conflict, Stepanakert was the largest city of the NKAO, with a population of 70,000 out of a total 189,000 (Armenians at the time comprised 75% of the region's total population).[8] By early 1992, that figure had dropped to 50,000.[9]

During the war, the city suffered immense damage from Azeri bombardment, especially in early 1992 when the Azerbaijanis used the town of Shushi as an artillery firebase to fire GRAD missiles against it. So destructive was the damage caused by the incessant bombardment, that a journalist for Time noted in an April 1992 article that "scarcely a single building [had] escaped damage in Stepanakert."[9] The Azerbaijani military staged several ground attacks against the city, which were successfully repulsed by Armenian forces. It was not until May 9, 1992, with the capture of Shusha, that the ground bombardment ceased. The city, nevertheless, continued to suffer aerial bombardment for the remainder of the war.

There has been an unofficial cease-fire observed since 1994.[10]

Stepanakert has a semi-arid climate (BS) according to the Trewartha climate classification system. In the month of January, the average temperature drops to 0.5 °C (33 °F). In August, it averages around 22.6 °C (73 °F). 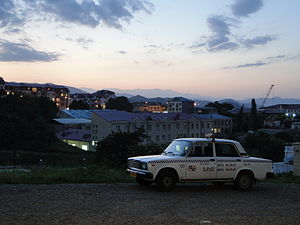 Stepanakert is the centre of the economy of Artsakh. Prior to the Nagorno-Karabakh War, the economy of Stepanakert was mainly based on food-processing industries, silk weaving and winemaking.[5] The economy was severely damaged during the war. However, in recent years, the economy has been developed mainly due to investments from the Armenian diaspora.

Most developed sectors of Stepanakert and the rest of the Nagorno-Karabakh Republic are tourism and services. Several hotels have been opened by diasporan Armenians from Russia, USA and Australia.[12] "Artsakhbank" is the largest banking services provider in Nagorno-Karabakh, while the "Karabakh Telecom" is the leading provider of mobile telecommunications and other communication services. 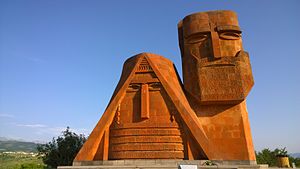 We Are Our Mountains

Many new schools in Stepanakert were opened during the last decadewith the help of the Armenian Diaspora.[14] Existing schools were also renovated with the donations of the diasporan Armenians.

The Artsakh State Museum in Stepanakert, has an important collection of ancient artifacts and Christian manuscripts.

The large monument known as We Are Our Mountains located at the north of Stepanakert,[15] is the symbol of the city and the self-proclaimed Nagorno-Karabakh Republic. 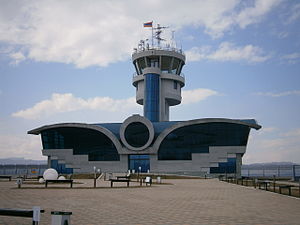 Stepanakert is served by a number of regular mini-bus lines. Old Soviet-era buses have been replaced with new modern buses. Regular trips to other provinces of Nagorno-Karabakh are also operated from the city.

Stepanakert is served by the nearby Stepanakert Airport, north of the city near the village of Ivanyan. In 2009, facilities reconstruction and repair work began.[16] Though originally scheduled to launch the first commercial flights on May 9, 2011, Karabakh officials postponed a new reopening date throughout the whole of 2011.[17] In May 2012, the director of the NKR's Civil Aviation Administration, Tigran Gabrielyan, announced that the airport will begin operations in summer 2012.[18] However, the airport still remains closed due to political reasons. The OSCE Minsk Group, which mediates the Nagorno-Karabakh conflict, reaffirmed that the operation of this airport could not be used to support any claim of a change in the status of Nagorno-Karabakh, and urged the sides to act in accordance with international law and consistent with current practice for flights over their territory.[19]

Stepanakert used to be connected through a railway line with the Yevlakh station on the Baku-Tbilisi railway. However, trips between Azerbaijan and NKR are abandoned since the start of the war between the two sides.

During the Soviet era, there were no traditional churches in Stepanakert, although most of the population of the city were members of the Armenian Apostolic Church. The late-19th-century church of Saint George was destroyed in 1936 to build the Stepanakert Drama Theatre.

Currently, the church of Surp Hakop (Saint James) opened in 2007 is the only church of the city. It was financed by benefactor Nerses Yepremian from Los Angeles. The church was consecrated on May 9, 2007, in honor of the 15th anniversary of the liberation of Shushi.[24]

The construction of the Stepanakert Cathedral of the Holy Protector Mother of God was launched on July 19, 2006. The cost of the project is around US$ 2 million and the architect of the church is Gagik Yeranosyan.[25] However, the construction process was too slow due to the lack of financial resources. The inauguration of the church is expected to take place in September 2006.[26]

There is an Armenian Evangelical Church, with over 500 attendants and members. The Evangelical community through the help of diaspora supports many schools, hospitals, and other institutions. 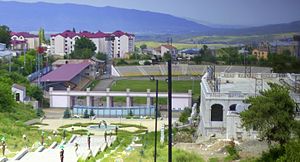 Football is the most popular sport in Nagorno-Karabakh and the city has a well-built football stadium. Since the mid-1990s, football teams from Karabakh started taking part in some domestic competitions in the Republic of Armenia. Lernayin Artsakh is the football club that represents the city of Stepanakert. The Artsakh national football league was launched in 2009.

The unrecognized Artsakh national football team was formed in 2012 and played their first competitive match against the unrecognized Abkhazia national football team in Sukhumi on 17 September 2012. The match ended with a 1-1 draw.[27][28] The following month, on 21 October 2012, Artsakh played the return match at the Stepanakert Republican Stadium against Abkhazia winning it with a result of 3-0.[29]

There is also interest in other sports, including basketball and volleyball.

Karabakh sportsmen also take part with the representing teams and athletes in the Pan-Armenian Games, organized in the Republic of Armenia. 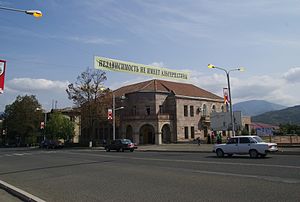 The Ministry of foreign affairs

Stepanakert is twinned with: 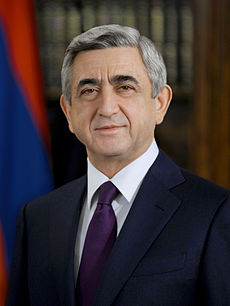