From Infogalactic: the planetary knowledge core
Jump to: navigation, search
File:Theaetetus stephanus page142.jpg
Volume 1, Page 142 of the 1578 Stephanus edition of Plato, showing the opening of Theaetetus

Stephanus pagination is a system of reference and organization used in modern editions and translations of Plato (and less famously, Plutarch) based on the 1578 edition [1] of Plato's complete works translated by Joannes Serranus (Jean de Serres) and published by Henricus Stephanus (Henri Estienne) in Geneva. Plato's (and Plutarch's) works are divided into numbers, and each number is divided into equal sections: a, b, c, d, and e. This system is often used to reference Plato. For example, 'Symposium 172a' refers to a specific passage of Plato's Symposium. Stephanus numbers refer to page numbers in the various volumes of Estienne's edition of 1578. No Platonic work spans more than one volume so there are no multiple occurrences of the same page number for a single work. Since Estienne published three volumes, however, the numbers need to be used in conjunction with a Platonic title to identify a unique text. For example, '172a' by itself could refer to a passage in any one of three dialogues, but Symposium 172a refers only to one passage.

More specific citations may add line numbers, e.g. Symposium 209a5–9, but these generally refer to the lines in John Burnet's Oxford Classical Text, not to Estienne's line divisions.

There are some peculiarities in the Stephanus page numbers. The length of each page and each paragraph can vary if extra commentary appears on the page of the 1578 edition. Thus Stephanus pages are not all of the same length. Some pages do not have all the paragraphs a through e. There are also gaps in the sequence of Stephanus page numbers for Plato's Republic and Laws. The reason is that the editors added separate introductions to each 'book' of these longer works, and thus the page numbers of these introductions are not used to refer to pages in Plato's dialogues.

The spurious dialogue Halcyon was included in the corpus of Lucian's works and does not have Stephanus numbers.

Bekker numbers are a comparable system for the works of Aristotle. 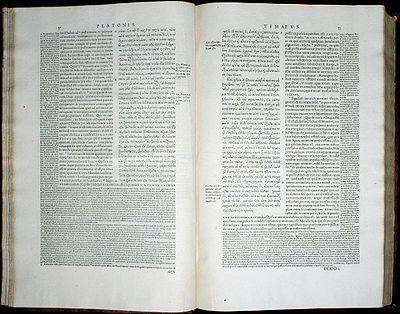 Volume 3, pages 32–33, of the 1578 Stephanus edition of Plato, showing a passage of Timaeus with the Latin translation and notes of Jean de Serres