From Infogalactic: the planetary knowledge core
Jump to: navigation, search
For other people of the same name, see Stephen Young (disambiguation). 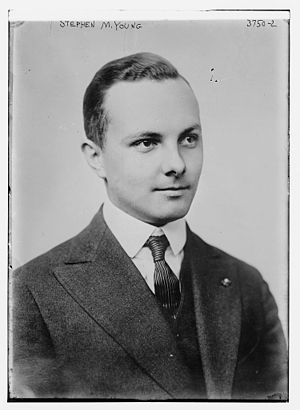 Young was born in Norwalk, Ohio, the fourth and youngest child of Stephen Marvin Young and Isabella Margaret Wagner. He and his father (who was a judge in Huron County) were namesakes of his great-grandfather, Stephen Marvin (1797-1868), the first pioneer of Shelby, Ohio.

Young served as an Ohio state representative from 1913 to 1917, and as an assistant prosecutor of Cuyahoga County, Ohio, from 1917 to 1918. He then served in the U.S. Army during World War I. In 1919, he returned to the Cuyahoga County prosecutor's office.

In 1922, Young ran for the office of Ohio attorney general and lost. In 1930, he ran for the Democratic nomination for governor of Ohio but lost in the primary to fellow Democrat George White, who went on to win the governorship.

From 1931 to 1932, Young served on the Ohio Commission on Unemployment Insurance. In 1932, Young was elected to one of Ohio's two at-large seats in the U.S. House of Representatives. He was re-elected to his seat in 1934. In 1936, instead of running for re-election to the House, Young ran for governor of Ohio again. This time, he lost the Democratic nomination to incumbent Gov. Martin Davey, George White's successor. From 1937 to 1939, Young served as special counsel to the attorney general of Ohio.

In 1938, Young again sought election to an at-large seat in the U.S. House of Representatives, but he and fellow Democrat John McSweeney were defeated by Republicans George H. Bender and L. L. Marshall. In 1940, Young was again elected to one of the at-large House seats; Bender took the other. Losing that race were Marshall and Democrat Francis W. Durbin. In 1942, Ohio was reduced to one at-large House seat, and Young failed in his re-election bid, losing to Bender.

During World War II, from 1943 to 1946, Young served in the U.S. Army, entering as a major and being discharged as a lieutenant colonel. He returned to practicing law in Cleveland and Washington, D.C.

In 1948, Young was elected to the U.S. House for a fourth time, defeating his old adversary George H. Bender, but promptly lost his seat again to Bender in 1950. In 1956, Young ran for attorney general of Ohio, but lost to Republican William B. Saxbe. In 1958, Young ran for the U.S. Senate against incumbent Republican John W. Bricker. Bricker seemed invincible, but Young capitalized on widespread public opposition to the proposed "right to work" amendment to Ohio's constitution, which Bricker had endorsed. Few thought that Young, 69 at the time, could win; even members of his own party had doubts, particularly Ohio's other senator, Democrat Frank J. Lausche. In an upset, Young defeated Bricker. Young knew that Lausche had not supported him and, when he took the oath of office, refused to allow Lausche to stand with him. This broke with the Senate custom of a senior senator escorting the junior senator of his state to take the oath.

Young was re-elected in 1964, defeating Republican Robert Taft Jr. He decided not to run for re-election to the Senate in 1970. The Democrats selected Howard Metzenbaum to replace Young, but Metzenbaum lost the race to Taft, who was again the Republican nominee. Metzenbaum eventually won Young's Senate seat back from Taft and held it for the Democratic Party until his retirement in 1994.

In the Senate, Young was well known for his biting responses to abusive, offensive or ignorant letters from constituents.[1] On one occasion, he wrote, "Dear Sir: It appears to me that you have been grossly misinformed, or are exceedingly stupid. Which is it?"[2] On another, he received a hostile letter that ended with the constituent's phone number and the message, "I would welcome the opportunity to have intercourse with you." Young wrote back, "you sir, can have intercourse with yourself."[3]

Young lived in Washington, D.C., until his death in 1984. He was buried in Norwalk Cemetery, Norwalk, Ohio.