Stephens County is a county located in the U.S. state of Oklahoma. As of the 2010 census, the population was 45,048.[1] Its county seat is Duncan.[2] The county was created at statehood, partly from the Chickasaw Nation in Indian Territory and partly from Comanche County in Oklahoma Territory. It was named for Texas politician John Hall Stephens.[3]

Stephens County was created at statehood from portions of both Oklahoma Territory (OT) and Indian Territory (IT). About two-thirds of the area came from Pickens County, Chickasaw Nation, IT, and the western third came from Comanche County, OT. The town of Duncan was designated as the county seat. County offices were located in rented facilities in Duncan until the first courthouse was built in 1921. That building was replaced by a new facility in 1967.[3]

Drilling for oil and gas began about 1910. The first production well did not come in until 1918. Production support activities soon followed. Erle P. Halliburton founded the Halliburton Oil Well Cementing Company in Duncan.[3] The company has since grown into a multinational corporation with headquarters in Dubai and Houston, Texas.

According to the U.S. Census Bureau, the county has a total area of 891 square miles (2,310 km2), of which 870 square miles (2,300 km2) is land and 21 square miles (54 km2) (2.4%) is water.[4] It lies within the Red Bed plains. Although there is no major river in the county, there are some creeks that provide drainage. Wildhorse Creek in the eastern part flows into the Washita River. Beaver Creek in the western part of the county flows into the Red River. Lakes in the county include Lake Humphreys, Clear Creek Lake, Duncan Lake, Comanche Lake, and Waurika Lake.[3] 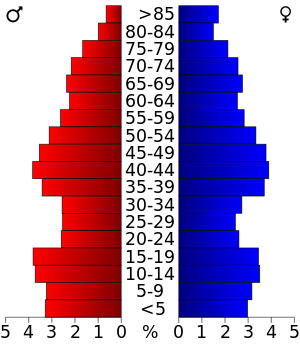 Age pyramid for Stephens County, Oklahoma, based on census 2000 data.