Sterling Trucks Corporation, commonly designated Sterling, was an American truck manufacturer headquartered in Redford Township, Michigan, USA and a subsidiary of Daimler Trucks North America LLC, itself a wholly owned subsidiary of the German Daimler AG. It was originally the heavy truck division of Ford Motor Company, but was purchased and rebranded in 1997.[1] Headquartered in Detroit, Michigan, its conventional trucks were built in St. Thomas, Ontario. Sterling-brand trucks were sold in the United States, Canada, Mexico, Australia, and New Zealand.

On October 14, 2008, Daimler Trucks North America announced a plan to discontinue the Sterling product line in an effort to consolidate its North American truck manufacturing operations under the Freightliner and Western Star brands. The company stopped taking orders for new trucks in January 2009, the St. Thomas manufacturing plant closed in March 2009, and the Portland, Oregon, plant was closed in June, 2010.[2] 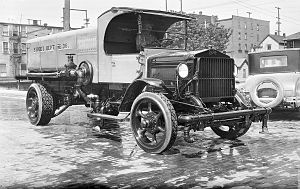 A street-cleaning truck in Seattle by the original Sterling company

The Sterling name was originally used by an independent truck manufacturer, bought by the White Motor Co. in about 1953. It was retired two years later. Although technically the property of the White Motor Co., and conveyed to its successor, Volvo-White Motor Co., which evolved into Volvo Trucks North America, the trademark had lain dormant so long that there were no grounds for objection when Daimler-Benz subsidiary Freightliner—whose trucks were distributed by White from the 1950s through 1975—resurrected it to supplant the Ford blue oval on their HN80 ("AeroMax") family of trucks after the purchase.

Sterling built class 8 tractors, as well as a range of medium and heavy duty cab/chassis vehicles. With bodies added by third-party upfitters/body builders, these cab/chassis vehicles were used for freight distribution as well as heavy vocational uses, such as construction, snow plowing and refuse collection. 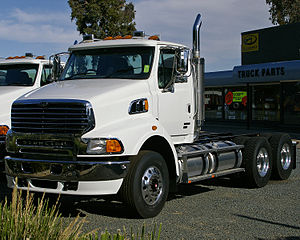