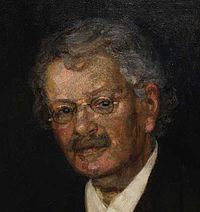 The Stockholm School (Swedish: Stockholmsskolan), is a school of economic thought. It refers to a loosely organized group of Swedish economists that worked together, in Stockholm, Sweden primarily in the 1930s.

The Stockholm School had--at the same time as John Maynard Keynes, but independently--come to the same conclusions in macroeconomics and the theories of demand and supply. Like Keynes, they were inspired by the works of Knut Wicksell, a Swedish economist active in the early years of the twentieth century.

“If his contribution had been available to readers of English before 1936, it is interesting to speculate whether the ‘revolution’ in macroeconomic theory of the depression decade would be referred to as ‘Myrdalian’ as much as ‘Keynesian’” [1]

The article was published in response to the publication of Keynes' magnum opus, The General Theory of Employment, Interest and Money in 1936, and its purpose was to draw international attention to the Swedish discoveries in the field, many of which had predated the discoveries of Keynes. Gunnar Myrdal was early in supporting the theses of John Maynard Keynes, maintaining that the basic idea of adjusting national budgets to slow or speed an economy was first developed in Sweden by him and the Stockholm School.

Myrdal and Ohlin went on to further develop their theories, and in so doing, they developed the intellectual underpinnings of the modern north European welfare state. Their theories were embraced and implemented as national policy by the two powerful arms of the Swedish labor movement, the Swedish Social Democratic Party and the national labor union, the Swedish Trade Union Confederation.

In the post-World War II geopolitical situation of the Cold War, with two rival predatory political blocks, their theories also achieved wide international appeal as a "Third Way", i.e. a middle way between a capitalist economy and a communist economy. The objective of this "third way" was to achieve a high level of social equality without undermining economic efficiency.

Other members,such as Erik Lundberg, continued as business cycle-oriented economists.