The Storting (Norwegian: Stortinget [ˈstuːʈɪŋə], "the great thing" or "the great council") is the supreme legislature of Norway, established in 1814 by the Constitution of Norway. It is located in Oslo. The unicameral parliament has 169 members, and is elected every four years based on party-list proportional representation in nineteen plural member constituencies.

The assembly is led by a president and five vice presidents—the presidium. The members are allocated to twelve standing committees, as well as four procedural committees. Three ombudsmen are directly subordinate to parliament: the Parliamentary Intelligence Oversight Committee and the Office of the Auditor General .

Parliamentarianism was established in 1884. In 2009, qualified unicameralism was replaced by unicameralism, through the dissolution of the two chambers: the Lagting and the Odelsting.

Following the 2013 election, eight parties are represented in parliament: the Labour Party (55 representatives), Conservative Party (48), the Progress Party (29), the Centre Party (10), the Christian Democratic Party (10), the Liberal Party (9), the Socialist Left Party (7), and the Green Party (1). Since 2013 Olemic Thommessen has been president.

The parliament in its present form was first constituted at Eidsvoll in 1814, although its origins can be traced back as early as the 9th century to the allting, a type of thing, or common assembly of free men in Germanic societies that would gather at a place called a thingstead and were presided by lawspeakers. The alltings were where legal and political matters were discussed. These gradually were formalised so that the things grew into regional meetings and acquired backing and authority from the crown, even to the extent that on occasions they were instrumental in effecting change in the monarchy itself.

As oral laws became codified and Norway unified as a geopolitical entity in the 10th century, the lagtings ("law things") were established as superior regional assemblies. During the mid-13th century, the by then archaic regional assemblies, the Frostating, the Gulating, the Eidsivating and the Borgarting ("burgher thing") were amalgamated and the corpus of law was set down under the command of King Magnus Lagabøte. This jurisdiction remained significant until King Frederick III proclaimed absolute monarchy in 1660; this was ratified by the passage of the King Act of 1665, and this became the constitution of the Union of Denmark and Norway and remained so until 1814 and the foundation of the Storting.

The Parliament of Norway Building opened in 1866.

On 27 June 1940 the presidium signed an appeal to King Haakon, about [the desire for] his abdication.[1] (The presidium back then consisted of the presidents and vicepresidents of parliament, Odelstinget and Lagtinget.[2] Ivar Lykke stepped in (according to mandate) for president in exile, C. J. Hambro;[3] Lykke was one [of the six] who signed.[1])

In September 1940 the representatives were summoned to Oslo, and voted in favour of the results of the negotiations between the presidium and the authorities of the German invaders.[1] (92 voted for, and 53 voted against.[1]) However, directives from Adolf Hitler resulted in the obstruction of "the agreement of cooperation between parliament and [the] occupation force".[1]

Although the Storting has always been unicameral, until 2009 it would divide itself into two departments in legislative matters. After elections, the Storting would elect a quarter of its membership to form the Lagting a sort of "upper house", with the remaining three-quarters forming the Odelsting or "lower house". The division was also used on very rare occasions in cases of impeachment. The original idea in 1814 was probably to have the Lagting act as an actual upper house, and the senior and more experienced members of the Storting were placed there. Later, however, the composition of the Lagting closely followed that of the Odelsting so that there was very little that differentiated them, and the passage of a bill in the Lagting was mostly a formality. 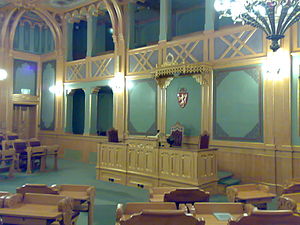 Lagting Hall, which also serves as the meeting room for the Christian Democratic Party's parliamentary group. The Lagting was discontinued in 2009.

A proposal to amend the constitution and abolish the system of Odelsting and Lagting was introduced in 2004 and was passed by the Storting on 20 February 2007 (159–1 with nine absentees). It took effect with the newly elected Storting in 2009. 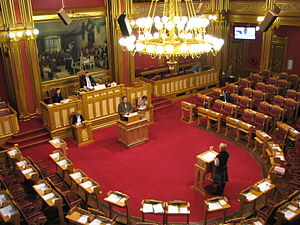 Interpellation (spørretimen) being held inside the hemicycle of the building

The legislative procedure goes through five stages. First, a bill is introduced to parliament either by a member of government or, in the case of a private member's bill, by any individual representative. Parliament will refer the bill to the relevant standing committee, where it will be subjected to detailed consideration in the committee stage. The first reading takes place when parliament debates the recommendation from the committee, and then takes a vote. If the bill is dismissed, the procedure ends. The second reading takes place at least three days after the first reading, in which parliament debates the bill again. A new vote is taken, and if successful, the bill is submitted to the King in Council for royal assent. If parliament comes to a different conclusion during the second reading, a third reading will be held at least three days later, repeating the debate and vote, and may adopt the amendments from the second reading or finally dismiss the bill.

Once the bill has reached the King in Council, the bill must be signed by the monarch and countersigned by the prime minister. It then becomes Norwegian law from the date stated in the act or decided by the government.

Articles 77–79 of the Norwegian constitution specifically grant the King of Norway the right to withhold Royal Assent from any bill passed by the Storting,[4] however, this right has never been exercised by any Norwegian monarch following the dissolution of the union between Norway and Sweden in 1905 (though it was exercised by Swedish monarchs prior to that time when they ruled Norway). Should the king ever choose to exercise this privilege, Article 79 provides a means by which his veto may be overridden: "If a Bill has been passed unaltered by two sessions of the Storting, constituted after two separate successive elections and separated from each other by at least two intervening sessions of the Storting, without a divergent Bill having been passed by any Storting in the period between the first and last adoption, and it is then submitted to the King with a petition that His Majesty shall not refuse his assent to a Bill which, after the most mature deliberation, the Storting considers to be beneficial, it shall become law even if the Royal Assent is not accorded before the Storting goes into recess."[4]

The presidium is chaired by the President of the Parliament, in Norway called the Storting, consists of the president and the five vice presidents of the Storting.[5]

The members of parliament are allocated into twelve standing committees, of which eleven are related to specific political topics. The last is the Standing Committee on Scrutiny and Constitutional Affairs. The standing committees have a portfolio that covers that of one or more government ministers.

The Election Committee consists of 37 members, and is responsible for internal elections within the parliament, as well as delegating and negotiating party and representative allocation within the presidium, standing committees and other committees. The Preparatory Credentials Committee has 16 members and is responsible for approving the election.

Five public agencies are appointed by parliament rather than by the government. The Office of the Auditor General is the auditor of all branches of the public administration and is responsible for auditing, monitoring and advising all state economic activities. The Parliamentary Ombudsman is an ombudsman responsible for public administration. It can investigate any public matter that has not been processed by an elected body, the courts or within the military. The Ombudsman for the Armed Forces is an ombudsman responsible for the military. The Ombudsman for Civilian National Servicemen is responsible for people serving civilian national service. The Parliamentary Intelligence Oversight Committee is a seven-member body responsible for supervising public intelligence, surveillance and security services. Parliament also appoints the five members of the Norwegian Nobel Committee that award the Nobel Peace Prize.

Parliament has an administration of about 450 people, led by Secretary-General Ida Børresen, who assumed office in 2012. She also acts as secretary for the presidium. 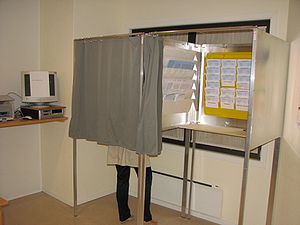 Members to Stortinget are elected based on party-list proportional representation in plural member constituencies. This means that representatives from different political parties are elected from each constituency. The constituencies are identical to the 19 counties of Norway. The electorate does not vote for individuals but rather for party lists, with a ranked list of candidates nominated by the party. This means that the person on top of the list will get the seat unless the voter alters the ballot. Parties may nominate candidates from outside their own constituency, and even Norwegian citizens currently living abroad.[6]

The Sainte-Laguë method is used for allocating parliamentary seats to parties. As a result, the percentage of representatives is roughly equal to the nationwide percentage of votes. Still, a party with a high number of votes in only one constituency can win a seat there even if the nationwide percentage is low. This has happened several times in Norwegian history. Conversely, if a party's initial representation in Stortinget is proportionally less than its share of votes, the party may seat more representatives through leveling seats, provided that the nationwide percentage is above the election threshold, currently at 4%. In 2009, nineteen seats were allocated via the leveling system.[6] Elections are held each four years (in odd-numbered years occurring after a year evenly divisible by four), normally on the second Monday of September.

Unlike most other parliaments, the Storting always serves its full four-year term; the Constitution does not allow snap elections. Substitutes for each deputy are elected at the same time as each election, so by-elections are rare.

Following the elections on 9 September 2013, the Red–Green Coalition of the Labour Party, the Socialist Left Party and the Centre Party lost their previously held majority. Coalition talks were initiated between the Conservative, Progress, Christian Democratic, and Liberal parties. The result of the negotiations were a minority cabinet consisting of the Conservative and Progress parties, with Erna Solberg as prime minister. The Liberal and Christian Democratic parties decided to remain in opposition but entered into a confidence and supply agreement with the Solberg cabinet.

The parliament has 169 members. If a member of parliament cannot serve (for instance because he or she is a member of the cabinet), a deputy representative serves instead. The deputy is the candidate from the same party who was listed on the ballot immediately behind the candidates who were elected in the last election.

In the plenary chamber, the seats are laid out in a hemicycle. Seats for cabinet members in attendance are provided on the first row, behind them the members of parliament are seated according to county, not party group. Viewed from the president's chair, Aust-Agder's representatives are seated near the front, furthest to the left, while the last members (Østfold) are seated furthest to the right and at the back.[7]

Since 5 March 1866, parliament has met in the Parliament of Norway Building at Karl Johans gate 22 in Oslo. The building was designed by the Swedish architect Emil Victor Langlet and is built in yellow brick with details and basement in light gray granite. It is a combination of several styles, including inspirations from France and Italy. Parliament also meets[clarification needed] in several other offices in the surrounding area, since the building is too small to hold the current staff of the legislature.

The building was designed by Emil Victor Langlet.