The Strategic Arms Limitation Talks (SALT) were two rounds of bilateral conferences and corresponding international treaties involving the United States and the Soviet Union—the Cold War superpowers—on the issue of armament control. The two rounds of talks and agreements were SALT I and SALT II.

Negotiations commenced in Helsinki, Finland, in November 1969.[1] SALT I led to the Anti-Ballistic Missile Treaty and an interim agreement between the two countries. Although SALT II resulted in an agreement in 1979, the United States chose not to ratify the treaty in response to the Soviet war in Afghanistan, which took place later that year. The agreement expired on December 31, 1985 and was not renewed.

SALT I is the common name for the Strategic Arms Limitation Talks Agreement signed on May 26, 1972. SALT I froze the number of strategic ballistic missile launchers at existing levels and provided for the addition of new submarine-launched ballistic missile (SLBM) launchers only after the same number of older intercontinental ballistic missile (ICBM) and SLBM launchers had been dismantled.[2] SALT I also limited land-based ICBMs that were in range from the northeastern border of the continental United States to the northwestern border of the continental USSR.[3] In addition to that, SALT I limited the number of SLBM capable submarines that NATO and the United States could operate to 50 with a maximum of 800 SLBM launchers between them. If the United States or NATO were to increase that number, the USSR could respond with increasing their arsenal by the same amount.

The strategic nuclear forces of the Soviet Union and the United States were changing in character in 1968. The total number of missiles held by the United States had been static since 1967 at 1,054 ICBMs and 656 SLBMs but there was an increasing number of missiles with multiple independently targetable reentry vehicle (MIRV) warheads being deployed. MIRVs carried multiple nuclear warheads, often with dummies, to confuse ABM systems, making MIRV defense by ABM systems increasingly difficult and expensive.[2]

One clause of the treaty required both countries to limit the number of sites protected by an anti-ballistic missile (ABM) system to two each. The Soviet Union had deployed such a system around Moscow in 1966 and the United States announced an ABM program to protect twelve ICBM sites in 1967. A modified two-tier Moscow ABM system is still used. The United States built only one ABM site to protect a Minuteman base in North Dakota where the "Safeguard" Program was deployed. Due to the system's expense and limited effectiveness, the Pentagon disbanded "Safeguard" in 1975.

Negotiations lasted from November 17, 1969, until May 1972 in a series of meetings beginning in Helsinki, with the US delegation headed by Gerard C. Smith, director of the Arms Control and Disarmament Agency. Subsequent sessions alternated between Vienna and Helsinki. After a long deadlock, the first results of SALT I came in May 1971, when an agreement was reached over ABM systems. Further discussion brought the negotiations to an end on May 26, 1972, in Moscow when Richard Nixon and Leonid Brezhnev signed both the Anti-Ballistic Missile Treaty and the Interim Agreement Between The United States of America and The Union of Soviet Socialist Republics on Certain Measures With Respect to the Limitation of Strategic Offensive Arms.[4] A number of agreed statements were also made. This helped improve relations between the United States and the USSR. 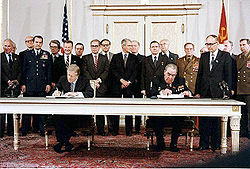 SALT II was a series of talks between United States and Soviet negotiators from 1972 to 1979 which sought to curtail the manufacture of strategic nuclear weapons. It was a continuation of the SALT I talks and was led by representatives from both countries. SALT II was the first nuclear arms treaty which assumed real reductions in strategic forces to 2,250 of all categories of delivery vehicles on both sides.

SALT II helped the United States to discourage the Soviets from arming their third-generation ICBMs of SS-17, SS-19 and SS-18 types with many more Multiple independently targetable reentry vehicles (MIRVs). In the late 1970s the USSR's missile design bureaus had developed experimental versions of these missiles equipped with anywhere from 10 to 38 warheads each. Additionally, the Soviets secretly agreed to reduce Tu-22M production to thirty aircraft per year and not to give them an intercontinental range. It was particularly important for the United States to limit Soviet efforts in the Intermediate-Range Nuclear Forces (INF) rearmament area.

The SALT II Treaty banned new missile programs (a new missile defined as one with any key parameter 5% better than in currently deployed missiles), so both sides were forced to limit their new strategic missile types development. However, the United States preserved their most essential programs like Trident and cruise missiles, President Jimmy Carter wished to use as his main defensive weapon as they were too slow to have first strike capability. In return, the USSR could exclusively retain 308 of its so-called "heavy ICBM" launchers of the SS-18 type.

An agreement to limit strategic launchers was reached in Vienna on June 18, 1979, and was signed by Leonid Brezhnev and Carter.

Six months after the signing, the Soviet Union invaded Afghanistan, and in September of the same year, the United States discovered that a Soviet combat brigade was stationed in Cuba.[5] (Although President Carter claimed this Soviet brigade had only recently been deployed to Cuba, the unit had been stationed on the island since the Cuban Missile Crisis of 1962.)[6] In light of these developments, the treaty was never ratified by the United States Senate. Its terms were, nonetheless, honored by both sides until it expired.