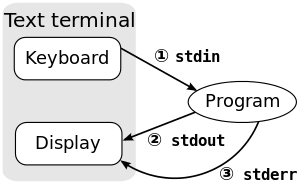 The standard streams for input, output, and error

In computer science, a stream is a sequence of data elements made available over time. A stream can be thought of as items on a conveyor belt being processed one at a time rather than in large batches

Streams are processed differently from batch data – normal functions cannot operate on streams as a whole, as they have potentially unlimited data, and formally, streams are codata (potentially unlimited), not data (which is finite). Functions that operate on a stream, producing another stream, are known as filters, and can be connected in pipelines, analogously to function composition. Filters may operate on one item of a stream at a time, or may base an item of output on multiple items of input, such as a moving average.

The term "stream" is used in a number of similar ways:

Streams can be used as the underlying data type for channels in interprocess communication.

The term "stream" is also applied to file system forks, where multiple sets of data are associated with a single filename. Most often, there is one main stream that makes up the normal file data, while additional streams contain metadata. Here "stream" is used to indicate "variable size data", as opposed to fixed size metadata such as extended attributes, but differs from "stream" as used otherwise, meaning "data available over time, potentially infinite".