In computing, Streaming SIMD Extensions (SSE) is an SIMD instruction set extension to the x86 architecture, designed by Intel and introduced in 1999 in their Pentium III series processors as a reply to AMD's 3DNow!. SSE contains 70 new instructions, most of which work on single precision floating point data. SIMD instructions can greatly increase performance when exactly the same operations are to be performed on multiple data objects. Typical applications are digital signal processing and graphics processing.

SSE was subsequently expanded by Intel to SSE2, SSE3, SSSE3, and SSE4. Because it supports floating point math, it had a wider application than MMX and became more popular. The addition of integer support in SSE2 made MMX largely redundant, though further performance increases can be attained in some situations by using MMX in parallel with SSE operations. 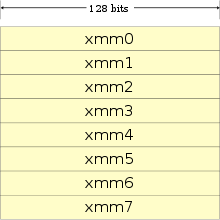 SSE used only a single data type for XMM registers:

SSE2 would later expand the usage of the XMM registers to include:

The first CPU to support SSE, the Pentium III, shared execution resources between SSE and the FPU. While a compiled application can interleave FPU and SSE instructions side-by-side, the Pentium III will not issue an FPU and an SSE instruction in the same clock cycle. This limitation reduces the effectiveness of pipelining, but the separate XMM registers do allow SIMD and scalar floating point operations to be mixed without the performance hit from explicit MMX/floating point mode switching.

This would correspond to four x86 FADD instructions in the object code. On the other hand, as the following pseudo-code shows, a single 128-bit 'packed-add' instruction can replace the four scalar addition instructions.

With all x86 instruction set extensions, it is up to the BIOS, operating system and application programmer to test and detect their existence and proper operation.

The use of multiple revisions of an application to cope with the many different sets of extensions available is the simplest way around the x86 extension optimization problem. Software libraries and some applications have begun to support multiple extension types hinting that full use of available x86 instructions may finally become common some 5 to 15 years after the instructions were initially introduced.