Structure of the Earth 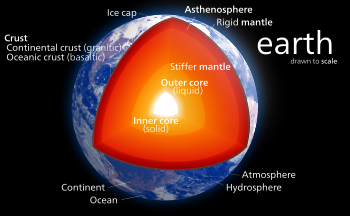 Structure of the Earth

The interior structure of the Earth is layered in spherical shells, like an onion. These layers can be defined by either their chemical or their rheological properties. Earth has an outer silicate solid crust, a highly viscous mantle, a liquid outer core that is much less viscous than the mantle, and a solid inner core. Scientific understanding of the internal structure of the Earth is based on observations of topography and bathymetry, observations of rock in outcrop, samples brought to the surface from greater depths by volcanoes or volcanic activity, analysis of the seismic waves that pass through the Earth, measurements of the gravitational and magnetic fields of the Earth, and experiments with crystalline solids at pressures and temperatures characteristic of the Earth's deep interior.

The force exerted by Earth's gravity can be used to calculate its mass, and by estimating the volume of the Earth, its average density can be calculated. Astronomers can also calculate Earth's mass from its orbit and effects on nearby planetary bodies. 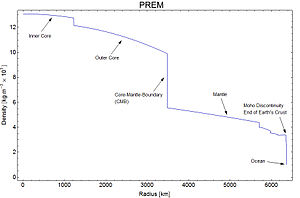 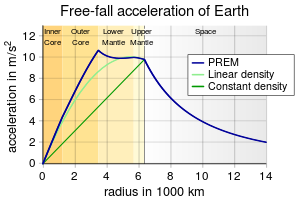 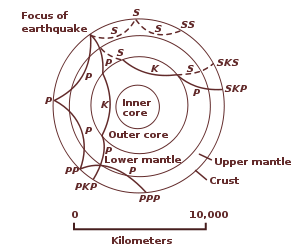 Mapping the interior of Earth with earthquake waves. 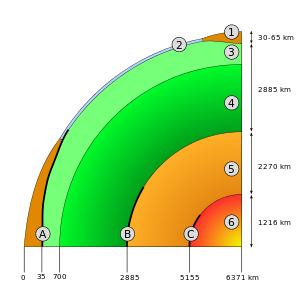 The structure of Earth can be defined in two ways: by mechanical properties such as rheology, or chemically. Mechanically, it can be divided into lithosphere, asthenosphere, mesospheric mantle, outer core, and the inner core. The interior of Earth is divided into 5 important layers. Chemically, Earth can be divided into the crust, upper mantle, lower mantle, outer core, and inner core. The geologic component layers of Earth[2] are at the following depths below the surface:

The layering of Earth has been inferred indirectly using the time of travel of refracted and reflected seismic waves created by earthquakes. The core does not allow shear waves to pass through it, while the speed of travel (seismic velocity) is different in other layers. The changes in seismic velocity between different layers causes refraction owing to Snell's law, like light bending as it passes through a prism. Likewise, reflections are caused by a large increase in seismic velocity and are similar to light reflecting from a mirror.

The inner core was discovered in 1936 by Inge Lehmann and is generally believed to be composed primarily of iron and some nickel. It is not necessarily a solid, but, because it is able to deflect seismic waves, it must behave as a solid in some fashion. Experimental evidence has at times been critical of crystal models of the core.[5] Other experimental studies show a discrepancy under high pressure: diamond anvil (static) studies at core pressures yield melting temperatures that are approximately 2000 K below those from shock laser (dynamic) studies.[6][7] The laser studies create plasma,[8] and the results are suggestive that constraining inner core conditions will depend on whether the inner core is a solid or is a plasma with the density of a solid. This is an area of active research.

In early stages of Earth's formation about four and a half billion (4.5×109) years ago, melting would have caused denser substances to sink toward the center in a process called planetary differentiation (see also the iron catastrophe), while less-dense materials would have migrated to the crust. The core is thus believed to largely be composed of iron (80%), along with nickel and one or more light elements, whereas other dense elements, such as lead and uranium, either are too rare to be significant or tend to bind to lighter elements and thus remain in the crust (see felsic materials). Some have argued that the inner core may be in the form of a single iron crystal.[9][10]

Under laboratory conditions a sample of iron nickel alloy was subjected to the corelike pressures by gripping it in a vise between 2 diamond tips (diamond anvil cell), and then heating to approximately 4000 K. The sample was observed with x-rays, and strongly supported the theory that Earth's inner core was made of giant crystals running north to south.[11][12]

The liquid outer core surrounds the inner core and is believed to be composed of iron mixed with nickel and trace amounts of lighter elements.

Recent speculation suggests that the innermost part of the core is enriched in gold, platinum and other siderophile elements.[13]

The matter that comprises Earth is connected in fundamental ways to matter of certain chondrite meteorites, and to matter of outer portion of the Sun.[14][15] There is good reason to believe that Earth is, in the main, like a chondrite meteorite. Beginning as early as 1940, scientists, including Francis Birch, built geophysics upon the premise that Earth is like ordinary chondrites, the most common type of meteorite observed impacting Earth, while totally ignoring another, albeit less abundant type, called enstatite chondrites. The principal difference between the two meteorite types is that enstatite chondrites formed under circumstances of extremely limited available oxygen, leading to certain normally oxyphile elements existing either partially or wholly in the alloy portion that corresponds to the core of Earth.

Recent evidence has suggested that the inner core of Earth may rotate slightly faster than the rest of the planet;[18] however, more recent studies in 2011[which?] found this hypothesis to be inconclusive. Options remain for the core which may be oscillatory in nature or a chaotic system.[citation needed] In August 2005 a team of geophysicists announced in the journal Science that, according to their estimates, Earth's inner core rotates approximately 0.3 to 0.5 degrees per year faster relative to the rotation of the surface.[19][20]

The current scientific explanation for Earth's temperature gradient is a combination of heat left over from the planet's initial formation, decay of radioactive elements, and freezing of the inner core. 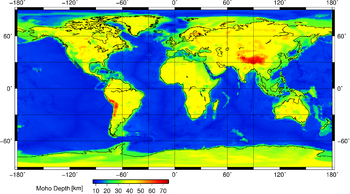 Earth's mantle extends to a depth of 2,890 km, making it the thickest layer of Earth. The upper mantle is divided into the lithospheric mantle and the asthenosphere. The upper and lower mantle are separated by the transition zone. The lowest part of the mantle next to the core-mantle boundary is known as the D″ (D prime prime) layer. The pressure at the bottom of the mantle is ~140 GPa (1.4 Matm). The mantle is composed of silicate rocks that are rich in iron and magnesium relative to the overlying crust. Although solid, the high temperatures within the mantle cause the silicate material to be sufficiently ductile that it can flow on very long timescales. Convection of the mantle is expressed at the surface through the motions of tectonic plates. As there is intense and increasing pressure as one travels deeper into the mantle, the lower part of the mantle flows less easily than does the upper mantle (chemical changes within the mantle may also be important). The viscosity of the mantle ranges between 1021 and 1024 Pa·s, depending on depth.[21] In comparison, the viscosity of water is approximately 10−3 Pa·s and that of pitch is 107 Pa·s.

The crust ranges from 5–70 km (~3–44 miles) in depth and is the outermost layer. The thin parts are the oceanic crust, which underlie the ocean basins (5–10 km) and are composed of dense (mafic) iron magnesium silicate igneous rocks, like basalt. The thicker crust is continental crust, which is less dense and composed of (felsic) sodium potassium aluminium silicate rocks, like granite. The rocks of the crust fall into two major categories – sial and sima (Suess,1831–1914). It is estimated that sima starts about 11 km below the Conrad discontinuity (a second order discontinuity). The uppermost mantle together with the crust constitutes the lithosphere. The crust-mantle boundary occurs as two physically different events. First, there is a discontinuity in the seismic velocity, which is most commonly known as the Mohorovičić discontinuity or Moho. The cause of the Moho is thought to be a change in rock composition from rocks containing plagioclase feldspar (above) to rocks that contain no feldspars (below). Second, in oceanic crust, there is a chemical discontinuity between ultramafic cumulates and tectonized harzburgites, which has been observed from deep parts of the oceanic crust that have been obducted onto the continental crust and preserved as ophiolite sequences.

Many rocks now making up Earth's crust formed less than 100 million (1×108) years ago; however, the oldest known mineral grains are 4.4 billion (4.4×109) years old, indicating that Earth has had a solid crust for at least that long.[22] 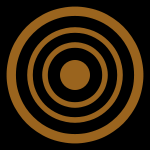 In 1692 Edmund Halley (in a paper printed in Philosophical Transactions of Royal Society of London) put forth the idea of Earth consisting of a hollow shell about 500 miles thick, with two inner concentric shells around an innermost core, corresponding to the diameters of the planets Venus, Mars, and Mercury respectively.[23] Halley's construct was a method of accounting for the (flawed) values of the relative density of Earth and the Moon that had been given by Sir Isaac Newton, in Principia (1687). "Sir Isaac Newton has demonstrated the Moon to be more solid than our Earth, as 9 to 5," Halley remarked; "why may we not then suppose four ninths of our globe to be cavity?"[23]