Stryi (Ukrainian: Стрий, Polish: Stryj) is a city located on the left bank of the Stryi River in Lviv Oblast (region) of western Ukraine (in the foothills of the Carpathian Mountains). Serving as the administrative center of Stryi Raion (district), It is designated as a city of oblast significance and does not belong to the raion. Population: 60,126 (2013 est.)[1].

Stryi is considered to be the first city in Ukraine to bear the blue-over-yellow Ukrainian national flag when it was hoisted on the flagpole of the Town Hall on March 14, 1990 before the fall of the Soviet regime.

Stryi, as a name of river is a very old name and means "stream".[2] Its etymology stems from an Indo-European root *sreu. Words that have the same root can be found in modern Ukrainian - струм, струя, Polish - struga, strumien, Irish (Celtic) - sruami, German - Strom (large river), Persian - struth (river), Hindu - sravati (to flow), Latvian - straume, Lithuanian - sriatas, strautas (stream, the thing that flows) and several other languages. It might also derive from Iranian word "Styr", which means "big" in Ossetian, as there is also other Styr river in Ukraine. The area was inhabited by the Ukrainian tribe of White Croats and it has been established that name Horvat (Croat) is likewise of Iranian (Sarmatian) origin.

In different times the name was written differently, although it has always sounded the same. In various old documents we can find such names: Stryg, Stry, Stryj, Stryjn, Stryjia, Strig, Strigenses, Stryi, Strey, Striig, Strya, Sthryensis, Sthrya, Stryei, Stri. The inhabitants take pride in the fact that the city has managed to keep its original name over time. 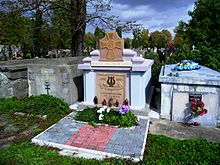 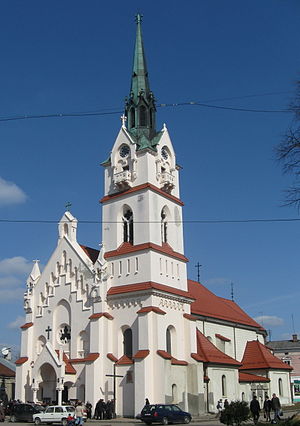 Church of Our Lady Protectress 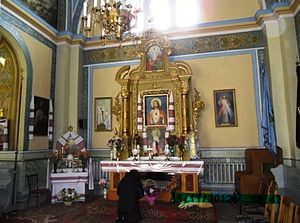 The relics of the blessed of Josaphat Kotsylovsky.

Stryi was mentioned for the first time in 1385 (see: Red Ruthenia). Already then its territory was incorporated in the Kingdom of Poland after the decline of Ruthenian Kingdom. In 1387 the Polish king Jogaila gave the city as the present to his pro-Tsarist brother Švitrigaila. In 1431 it was given the Magdeburg Rights, and it was located in the Ruthenian Voivodeship, which from the 14th century until 1772 was a part of Poland.[3] The city was governed by the local magistrate headed by a burgomaster.

Its geographical location had a positive influence on its development and growth. The town became a flourishing trade center being located on the major trade route between Halicz and Lwów and especially during the 15th to 16th century due to support from the Polish king John III Sobieski. It also was destroyed during one of the Tatars raids in 1523. The city was later rebuilt and included a castle for defense purposes which later in the 18th century was demounted by the Austrian authorities. In 1634 the city was destroyed once again by another Tatar raid. In times of the Khmelnytsky Uprising the Cossack Hetmanate army was reinforced here by the Hungarian regiments of prince Rákóczi of Transylvania. After the partition of the Polish-Lithuanian Commonwealth in 1772 the city became a part of the Austro-Hungary (see: Partitions of Poland). During the revolutionary times in the empire the Ruthenian Council is created in the city in 1848. During 1872-1875 the city was connected to a railroad network. Its first wooden train station was built in 1875. At this time it started to industrialize. Among the most influencing citizens of the city were Doctor Yevhen Olesnytsky, Father Oleksa Bobykevych, and Father O.Nyzhankivsky.

In 1886, a large fire burned almost the entire city to the ground. From October 1914 to May 1915 the city was occupied by the Russian Empire. In 1915 a bloody World War I battle took place in the Carpathian Mountains, around the peak of Zwinin (992 metres above sea level), a few kilometres south of Stryi in which some 33,000 Russian soldiers perished.

On November 1, 1918 an armed uprising took place in the city after which it became a part of the West Ukrainian People's Republic. Stryi was passed to Poland in May 1919, and becomes part of Poland first by the Warsaw treaty of 1920 and then the Riga Peace treaty of 1921. In 1939 Stryi became part of the Ukrainian SSR. (see: Polish September Campaign). In interbellum Poland, it was the capital of the Stryj County (area 2,081 square kilometres (803 sq mi), pop. 152600) of the Stanisławów Voivodeship. According to the Polish census of 1931 its population consisted of 35.6% Jews, 34.5% Poles, 28% Ukrainians and 1.6% Germans. The Nazis exterminated many of the Jews and sent almost all of the remaining Jews to concentration/work camps. During the Cold War it was home to Stryy air base.

On April 9, 2009 the Lviv Oblast council decided to remove a Soviet-era statue to the Red Army soldier that was installed by the local Communist regime in the city of Stryi and move it to a museum of the Soviet totalitarianism, saying that the statue carries no historical or cultural value to the city.

Notable people born in Stryi include the following:

Stryi is twinned with: