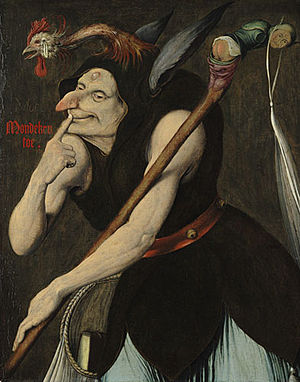 An Allegory of Folly (early 16th century) by Quentin Matsys

Stupidity is a lack of intelligence, understanding, reason, wit or sense. Stupidity may be innate, assumed or reactive – a defence against grief[1] or trauma.[2] 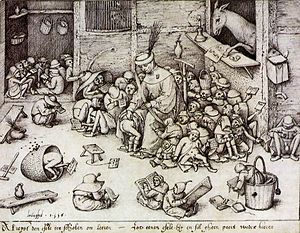 The root word stupid,[3] which can serve as an adjective or noun, comes from the Latin verb stupere, for being numb or astonished, and is related to stupor.[4] In Roman culture, the stupidus was the professional fall-guy in the theatrical mimes.[5]

According to the online Merriam-Webster dictionary, the words "stupid" and "stupidity" entered the English language in 1541. Since then, stupidity has taken place along with "fool," "idiot," "dumb," "moron," and related concepts as a pejorative appellation for human misdeeds, whether purposeful or accidental, due to absence of mental capacity.

Stupidity is a quality or state of being stupid, or an act or idea that exhibits properties of being stupid.[6] In a character study of "The Stupid Man" attributed to the Greek philosopher Theophrastus (c. 371 – c. 287 BC), stupidity was defined as "mental slowness in speech or action". The modern English word "stupid" has a broad range of application, from being slow of mind (indicating a lack of intelligence, care or reason), dullness of feeling or sensation (torpidity, senseless, insensitivity), or lacking interest or point (vexing, exasperating). It can either imply a congenital lack of capacity for reasoning, or a temporary state of daze or slow-mindedness.

In Understanding Stupidity, James F. Welles defines stupidity this way: "The term may be used to designate a mentality which is considered to be informed, deliberate and maladaptive." Welles distinguishes stupidity from ignorance; one must know they are acting in their own worst interest. Secondly, it must be a choice, not a forced act or accident. Lastly, it requires the activity to be maladaptive, in that it is in the worst interest of the actor, and specifically done to prevent adaption to new data or existing circumstances."[7]

Carlo Maria Cipolla, an economic historian, is famous for his essays about human stupidity, such as "The Basic Laws of Human Stupidity".[8][9][10] He viewed stupid people as a group, more powerful by far than major organizations such as the Mafia and the industrial complex, which without regulations, leaders or manifesto nonetheless manages to operate to great effect and with incredible coordination.

These are Cipolla's five fundamental laws of stupidity:

Eric Berne described the game of "Stupid" as having "the thesis...'I laugh with you at my own clumsiness and stupidity.'"[11] He points out that the player has the advantage of lowering other people's expectations, and so evading responsibility and work; but that he or she may still come through under pressure, like the proverbially stupid younger son.[12]

Wilfred Bion considered that psychological projection created a barrier against learning anything new, and thus its own form of pseudo-stupidity.[13]

Otto Fenichel maintained that "quite a percentage of so-called feeble-mindedness turns out to be pseudo-debility, conditioned by inhibition ... Every intellect begins to show weakness when affective motives are working against it".[14] He suggests that "people become stupid ad hoc, that is, when they do not want to understand, where understanding would cause anxiety or guilt feeling, or would endanger an existing neurotic equilibrium."[15]

In rather different fashion, Doris Lessing argued that "there is no fool like an intellectual ... a kind of clever stupidity, bred out of a line of logic in the head, nothing to do with experience."[16]

In the Romantic reaction to Enlightenment wisdom, a valorisation of the irrational, the foolish and the stupid emerged, as in William Blake's dictum that "if the fool would persist in his folly he would become wise;"[17] or Jung's belief that "it requires no art to become stupid; the whole art lies in extracting wisdom from stupidity. Stupidity is the mother of the wise, but cleverness never."[18]

Similarly, Michel Foucault argued for the necessity of stupidity to re-connect with what our articulate categories exclude, to recapture the alterity of difference.[19] 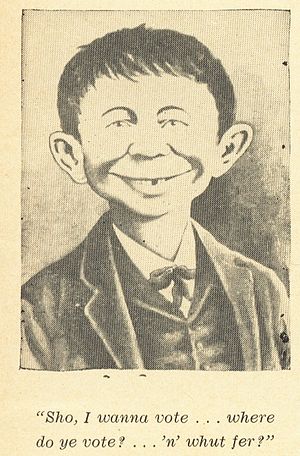 Pictography of Alfred E. Neuman used in an editorial critical of abolishing the poll tax in the south, with a caption showing the person wants to vote but is too ignorant to understand what voting means.

The fool or buffoon has been a central character in much comedy. Alford and Alford found that humor based on stupidity was prevalent in "more complex" societies as compared to some other forms of humor.[20] Some analysis of Shakespeare's comedy has found that his characters tend to hold mutually contradictory positions; because this implies a lack of careful analysis it indicates stupidity on their part.[21]

Today there is a wide array of television shows that showcase stupidity such as The Simpsons.[22] Goofball comedy refers to a class of naive, zany humour typified by actor Leslie Nielsen.[23][24]

The first book in English on stupidity was A Short Introduction to the History of Stupidity by Walter B. Pitkin (1932):

According to In Search of Stupidity: Over Twenty Years of High Tech Marketing Disasters, (2003) by Merrill R. Chapman:

"While In Search of Excellence turned out to be a fraud, In Search of Stupidity is genuine, and no names have been changed to protect the guilty," according to one reviewer.[26]

Stupidity was a 2003 movie directed by Albert Nerenberg.[27] It depicted examples and analyses of stupidity in modern society and media, and sought "to explore the prospect that willful ignorance has increasingly become a strategy for success in the realms of politics and entertainment."[28]

The Darwin Awards honour people who ensure the long-term survival of the human race by removing themselves from the gene pool in a sublimely idiotic fashion.