The first known formal subdivision of Kiev dates to 1810 when the city was subdivided into 4 parts: Pechersk, Starokyiv, and the first and the second parts of Podil. In 1833-1834 according to Tsar Nicholas I's decree, Kiev was subdivided into 6 police raions; later being increased to 10. As of 1917, there were 8 Raion Councils (Duma), which were reorganized by Pavlo Skoropadskyi into 17 raions. In 1924 bolsheviks reorganized them into the bigger six party-administrated Raions with various sub-raions under Hryhoriy Hrynko administration. All the city modern raions that start with a letter D are located on the left bank of Dnieper and until 1927 were part of Chernigov Governorate with Darnytsia being the first to be incorporated within the city limits that year.

Over the Soviet time, as city was expanding, the number of raions was gradually increasing. The raions has been also commonly named after Soviet party leaders, and as political situation was changing and some leaders were overturned by the other, so raion names were also changing.

The last raion reform took place in 2001 when the number of raions has been decreased from 14 to 10.

Under Oleksandr Omelchenko (mayor from 1999 to 2006), there were further plans for the merger of some raions and revision of their boundaries, and the total number of raions had been planned to be decreased from 10 to 7. With the election of the new mayor-elect (Leonid Chernovetskyi) in 2006, these plans were conducted. 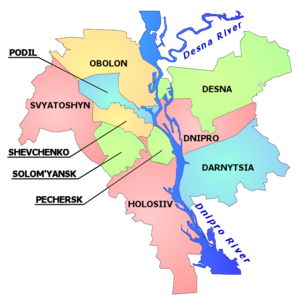 Administratively, the city is divided into raions (districts), which have their own units of central and local government with jurisdiction over a limited scope of affairs.

The last Kiev raion reorganization took place in 2001, and currently Kiev raions are:

Most of the raions are named after respective historical neighborhoods of the city.

The Right Bank and the Left Bank

The natural first level of subdivision of the city is into the Right Bank and the Left Bank of the Dnieper River (a few large islands belong to the left-bank raions).

The Right Bank (Ukrainian: Правий Берег, Pravyi Bereh), located on the western side of the river, contains the older portions of the city, as well as the majority of Kiev's business and governmental institutions.

The eastern Left Bank (Ukrainian: Лівий Берег, Livyi Bereh), incorporated into the city only in the twentieth century, is predominantly residential. There are large industrial and green areas in both the Right Bank and the Left Bank.

The terms "Right Bank" and, especially, "Left Bank" are recognized in the names of Kiev's infrastructure, e.g. "Livoberezhna" Metro station.

Residents widely recognize a system of the non-formal historical neighborhoods. Such neighborhoods count in dozens, however, constituting a kind of hierarchy, since most of them have lost their distinctive topographic limits.

The names of the oldest neighborhoods go back to the Middle Ages, and sometimes pose a great linguistic interest. The newest whole-built developments bear numeric designations or residential marketing names.

Most notable informal historical neighborhoods of Kiev include:

Lypky and Zvirynets of the Pecherskyi Raion are the most expensive areas to live. Koncha-Zaspa is arguably the most interesting neighborhood name dating back to the times of Kievan Rus'. A local legend explaining the name of a locality states the Rus warriors who felt asleep (zaspaly) during their watch at the outpost were killed (koncheni) by Golden Horde invaders. Koncha-Zaspa is now a prestigious area too.

Another useful pattern of city division is the Kiev Metro system. However, metro lines do not cover significant parts of Kiev, making such orientation very approximate (but easy for newcomers). Sometimes, the system of elektrychka train stops are used for the same purpose.

The full informal set of addresses in Kiev (used, for example, in real estate advertising) would include: