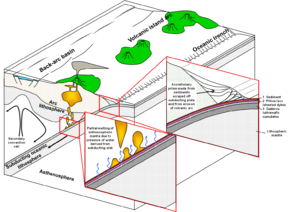 Orogenesis, or mountain-building, occurs when large pieces of material on the subducting plate (such as island arcs) are pressed into the over-riding plate or when subhorizontal contraction occurs in the over-riding plate. These areas are subject to many earthquakes, which are caused by the interactions between the subducting slab and the mantle, the volcanoes, and (when applicable) the mountain-building related to island arc collisions.[citation needed]

Subduction zones are sites of convective downwelling of Earth's lithosphere (the crust plus the top non-convecting portion of the upper mantle). Subduction zones exist at convergent plate boundaries where one plate of oceanic lithosphere converges with another plate. The descending slab, the subducting plate, is over-ridden by the leading edge of the other plate. The slab sinks at an angle of approximately twenty-five to forty-five degrees to Earth's surface. This sinking is driven by the temperature difference between the subducting oceanic lithosphere and the surrounding mantle asthenosphere, as the colder oceanic lithosphere is, on average, more dense. At a depth of approximately 80–120 kilometres, the basalt of the oceanic crust is converted to a metamorphic rock called eclogite. At that point, the density of the oceanic crust increases and provides additional negative buoyancy (downwards force). It is at subduction zones that Earth's lithosphere, oceanic crust, sedimentary layers, and some trapped water are recycled into the deep mantle. 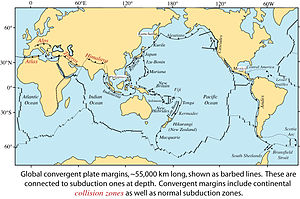 The subducting basalt and sediment are normally rich in hydrous minerals and clays. Additionally, large quantities of water are introduced into cracks and fractures created as the subducting slab bends downward.[2] During the transition from basalt to eclogite, these hydrous materials break down, producing copious quantities of water, which at such great pressure and temperature exists as a supercritical fluid. The supercritical water, which is hot and more buoyant than the surrounding rock, rises into the overlying mantle where it lowers the pressure in (and thus the melting temperature of) the mantle rock to the point of actual melting, generating magma. The magmas, in turn, rise because they are less dense than the rocks of the mantle. The mantle-derived magmas (which are basaltic in composition) can continue to rise, ultimately to Earth's surface, resulting in a volcanic eruption. The chemical composition of the erupting lava depends upon the degree to which the mantle-derived basalt interacts with (melts) Earth's crust and/or undergoes fractional crystallization.

Above subduction zones, volcanoes exist in long chains called volcanic arcs. Volcanoes that exist along arcs tend to produce dangerous eruptions because they are rich in water (from the slab and sediments) and tend to be extremely explosive. Krakatoa, Nevado del Ruiz, and Mount Vesuvius are all examples of arc volcanoes. Arcs are also known to be associated with precious metals such as gold, silver and copper, again believed to be carried by water and concentrated in and around their host volcanoes in rock called "ore".

The analytic part of the model shows that where two lithospheric slabs of different densities are positioned one next to the other, maximum differential lithostatic pressure would occur at the base of the denser slab directed towards the lighter one. The resulting strain would lead to the rotation of the contact zone between the slabs to dip towards the lighter slab, and the dip would be reduced until offset along the contact zone would be enabled. The parameters that constrain the rotation of the contact zone are known as "Argand Numbers".[3][4]

Analogue experiments based on the concept were carried out using a centrifuge using a lighter and denser brittle and ductile "lithosphere" floating on still denser "asthenosphere". The experiments suggested that the initiation of subduction started with the penetration of the denser ductile "lithosphere" below its lighter counterpart. Consequently, the lighter "lithosphere" was uplifted, then collapsed on the denser slab, increasing the load on its edge and driving the denser sequence further under the lighter slab. It was presumed further that once the denser "lithosphere" was set below the lighter one, it underwent conversion to eclogite, which increased its density and drove it to subduct into the "asthenosphere". The rate of this part of the subduction process was determined by friction. Reduction of slab friction could result from serpentinization and other water-related processes.[3][4]

Geophysicist Don L. Anderson has hypothesized that plate tectonics could not happen without the calcium carbonate laid down by bioforms at the edges of subduction zones. The massive weight of these sediments could be softening the underlying rocks, making them pliable enough to plunge.[5] However, considering that some refractory minerals used for dating early Earth, such as zircon, are typically generated in subduction zones and associated with granites and pegmatites, some of these early dates preceded the biological activity on Earth.[citation needed] 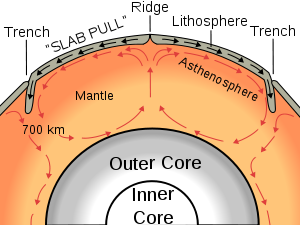 The arc magmatism occurs one hundred to two hundred kilometres from the trench and approximately one hundred kilometres from the subducting slab. This depth of arc magma generation is the consequence of the interaction between fluids, released from the subducting slab, and the arc mantle wedge that is hot enough to generate hydrous melting. Arcs produce about 25% of the total volume of magma produced each year on Earth (approximately thirty to thirty-five cubic kilometres), much less than the volume produced at mid-ocean ridges, and they contribute to the formation of new continental crust. Arc volcanism has the greatest impact on humans, because many arc volcanoes lie above sea level and erupt violently. Aerosols injected into the stratosphere during violent eruptions can cause rapid cooling of Earth's climate and affect air travel.

The strains caused by plate convergence in subduction zones cause at least three different types of earthquakes. Earthquakes mainly propagate in the cold subducting slab and define the Wadati-Benioff zone. Seismicity shows that the slab can be tracked down to the upper mantle/lower mantle boundary (approximately six hundred kilometre depth).

Nine out of the ten largest earthquakes to occur in the last century were subduction zone events, which includes the 1960 Great Chilean earthquake, which, at M 9.5, was the largest earthquake ever recorded; the 2004 Indian Ocean earthquake and tsunami; and the 2011 Tōhoku earthquake and tsunami. The subduction of cold oceanic crust into the mantle depresses the local geothermal gradient and causes a larger portion of Earth to deform in a more brittle fashion than it would in a normal geothermal gradient setting. Because earthquakes can occur only when a rock is deforming in a brittle fashion, subduction zones can cause large earthquakes. If such a quake causes rapid deformation of the sea floor, there is potential for tsunamis, such as the earthquake caused by subduction of the Indo-Australian Plate under the Euro-Asian Plate on December 26, 2004 that devastated the areas around the Indian Ocean. Small tremors, with cause small, nondamaging tsunamis, occur frequently.

Outer rise earthquakes occur when normal faults oceanward of the subduction zone are activated by flexture of the plate as it bends[6] into the subduction zone. The Samoa earthquake of 2009 is an example of this type of event. Displacement of the sea floor caused by this event generated a six-metre tsunami in nearby Samoa.

Anomalously deep events are a characteristic of subduction zones, which produce the deepest quakes on the planet. Earthquakes are generally restricted to the shallow, brittle parts of the crust, generally at depths of less than twenty kilometres. However, in subduction zones, quakes occur at depths as great as seven hundred kilometres. These quakes define inclined zones of seismicity known as Wadati-Benioff zones, after the scientists who discovered them, which trace the descending lithosphere. Seismic tomography has helped detect subducted lithosphere in regions where there are no earthquakes. Some subducted slabs seem not to be able to penetrate the major discontinuity in the mantle that lies at a depth of about 670 kilometres whereas other subducted oceanic plates can penetrate all the way to the core-mantle boundary. The great seismic discontinuities in the mantle, at 410 and 670 kilometre depth, are disrupted by the descent of cold slabs in deep subduction zones.

Subducting plates can bring island arcs and sediments to convergent margins. Thie material often does not subduct with the rest of the plate but instead is accreted to the continent in the form of exotic terranes. They cause crustal thickening and mountain-building. This accretion process is thought by many geologists to be the source of much of western North America and of the uplift that produced the Rocky Mountains.

Subduction typically occurs at a moderately steep angle right at the point of the convergent plate boundary. However, anomalous shallower angles of subduction are known to exist as well some that are extremely steep.

Subduction zones have also been considered as possible disposal sites for nuclear waste in which the action of subduction itself would carry the material into the planetary mantle, safely away from any possible influence on humanity or the surface environment. However, that method of disposal is currently banned by international agreement.[9][10][11][12] Furthermore, plate subduction zones are associated with very large megathrust earthquakes, making the effects on using any specific site for disposal unpredictable and possibly adverse to the safety of longterm disposal.[10]