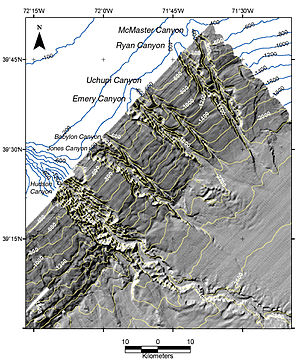 Shaded relief image of seven submarine canyons imaged on the continental slope off New York, using multibeam echosounder data, the Hudson Canyon is the furthest to the left 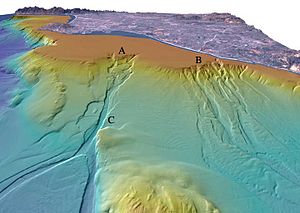 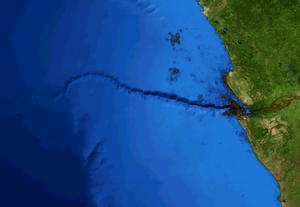 The Congo Canyon off southwestern Africa, about 300 km visible in this view 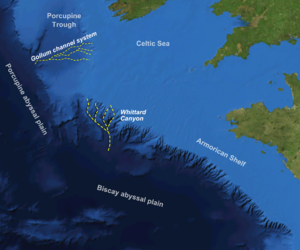 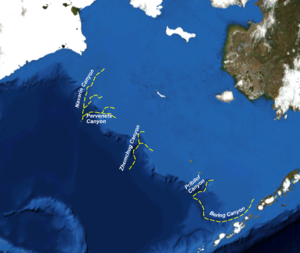 Submarine canyons are more common on the steep slopes found on active margins compared to those on the gentler slopes found on passive margins.[4] They show erosion through all substrates, from unlithified sediment to crystalline rock. Canyons are steeper, shorter, more dendritic and more closely spaced on active than on passive continental margins.[2] The walls are generally very steep and can be near vertical. The walls are subject to erosion by bioerosion, or slumping. There are an estimated 9,477 submarine canyons on earth, covering about 11% of the continental slope.[5]

An early and obvious theory was that the canyons present today were carved during glacial times, when sea level was about 125 meters below present sea level, and rivers flowed to the edge of the continental shelf. However, while many (but not all) canyons are found offshore from major rivers, subaerial river erosion cannot have been active to the water depths as great as 3000 meters where canyons have been mapped, as it is well established (by many lines of evidence) that sea levels did not fall to those depths.

The major mechanism of canyon erosion is now thought to be turbidity currents and underwater landslides. Turbidity currents are dense, sediment-laden currents which flow downslope when an unstable mass of sediment that has been rapidly deposited on the upper slope fails, perhaps triggered by earthquakes. There is a spectrum of turbidity- or density-current types ranging from "muddy water" to massive mudflow, and evidence of both these end members can be observed in deposits associated with the deeper parts of submarine canyons and channels, such as lobate deposits (mudflow) and levees along channels.

Mass wasting, slumping, and submarine landslides are forms of slope failures (the effect of gravity on a hillslope) observed in submarine canyons. Mass wasting is the term used for the slower and smaller action of material moving downhill. Slumping is generally used for rotational movement of masses on a hillside. Landslides, or slides, generally comprise the detachment and displacement of sediment masses.

It is now understood that many mechanisms of submarine canyon creation have had effect to greater or lesser degree in different places, even within the same canyon, or at different times during a canyon's development. However, if a primary mechanism must be selected, the downslope lineal morphology of canyons and channels and the transportation of excavated or loose materials of the continental slope over extensive distances require that various kinds of turbidity or density currents act as major participants.

In addition to the processes described above, submarine canyons that are especially deep may form by another method. In certain cases, a sea with a bed significantly below sea level is cut off from the larger ocean to which it is usually connected. The sea which is normally repleted by contact and inflow from the ocean is now no longer replenished and hence dries up over a period of time, which can be very short if the local climate is arid. In this scenario, rivers that previously flowed into the sea at a sea level elevation now can cut far deeper into the bottom of the bed now exposed. The Messinian Salinity Crisis is an example of this phenomenon; between five and six million years ago, the Mediterranean Sea became isolated from the Atlantic Ocean and evaporated away in roughly a thousand years. During this time, the Nile River delta, among other rivers, extended far beyond its present location, both in depth and length. In a cataclysmic event, the Mediterranean sea basin was flooded. One relevant consequence is that the submarine canyons eroded are now far below the present sea level.