Subprefecture is an administrative division of a country that is below prefecture or province.

There are twelve Albanian counties or prefectures, each of which is subdivided into several districts, sometimes translated as subprefectures.

In Brazil the subprefectures (Portuguese: subprefeituras) are administrative divisions of some big cities, such as São Paulo and Rio de Janeiro. The head of a subprefecture, the subprefeito, is indicated by the municipality's mayor (in Brazil called prefeito).

In São Paulo there are 31 subprefectures. The largest in total area, Parelheiros, covers 353.5 km², and the most populous, Capela do Socorro, has more than 600,000 inhabitants.

See also: History of the administrative divisions of China

It was used in Qing Dynasty. Called ting (廳 or 厅) in Chinese, it is also on the same level as a department (州) and a district (縣). And is below prefecture (府). 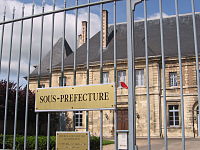 A sous-préfecture is an administrative subdivision of a department in Ivory Coast.