The Sudanese Air Force (Arabic: القوّات الجوّيّة السودانيّة Al Quwwat al-Jawwiya As-Sudaniya‎‎) is the air force operated by the Republic of the Sudan. As such it is part of the Sudanese Armed Forces.

The Air Force gained its first combat aircraft when 12 Jet Provosts with a close air support capability were delivered in 1962.[1] In the 1960s Union of Soviet Socialist Republics and People's Republic of China started supplying the Sudanese Air Force with aircraft. This included supply of Shenyang F-5 fighters (F-5/FT-5 variants).[citation needed]

The air force flies a mixture of transport planes, fighter jets and helicopters sourced from places including the European Union, Russia, China and the United States. However, not all the aircraft are in a fully functioning condition and the availability of spare parts is limited. In 1991, the two main air bases were at the capital Khartoum and Wadi Sayyidna near Omdurman.[2]

Sudan has also made a successful deal to buy two different batches of 12 MiG-29 Russian fighter jets each.[4] There are 23 MiG-29s in active service as of late 2008.[5] However, the rebel Justice and Equality Movement claimed to have shot down one MiG-29 with large-caliber machine-gun fire on 10 May 2008, killing the pilot of the plane, a retired Russian Air Force fighter pilot; the Sudanese government denied the allegation.[6] South Sudan also claimed to have shot down a Sudanese MiG-29 during the 2012 border conflict.[7]

During May, June, and August 2011, members of the UN Panel of Experts on the Sudan documented the following aircraft in Darfur, potentially indicating violations of United Nations Security Council Resolution 1556:[8]

In August 2013, pictures showed Su-24's in Sudanese colors, reporting that the aircraft were among the ex Belarusian Air Force Su-24's retired in 2012.[9] Various reports have said that the air force uses Iranian drones such as the Ghods Ababil.[10][11][12][13] 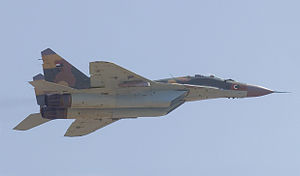 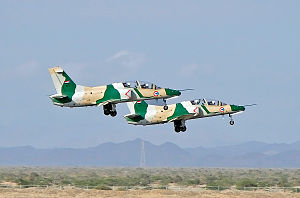 K-8s of the Sudanese Air Force taking off from Port Sudan Airport. 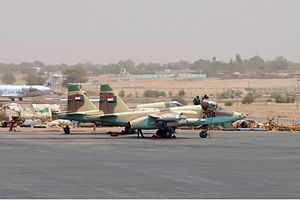 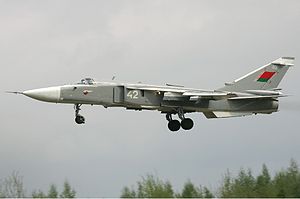 An Su-24M of the Belarusian Air Force.