From Infogalactic: the planetary knowledge core
Jump to: navigation, search
For the adjective, see Wiktionary:Sulky. 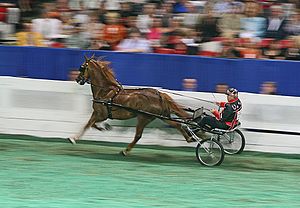 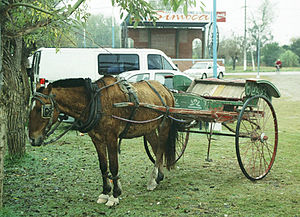 Sulky and horse in Simoca, the 'sulky capital' of Argentina

A sulky is a lightweight cart having two wheels and a seat for the driver only but usually without a body, generally pulled by horses or dogs, and is used for harness races. The term is also used for a light stroller, an arch mounted on wheels or crawler tracks and used in logging, or other types of vehicle having wheels and usually a seat for the driver, such as a plough, lister or cultivator. 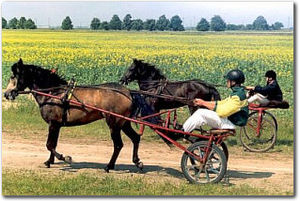 A sulky for horses is a lightweight two-wheeled, single-seat cart that is used as a form of rural transport in many parts of the world. A special development of this is now used in most forms of harness racing in Argentina, Australia, Canada, the United States and New Zealand, including both trotting and pacing races. They are called "sulkies" because the driver must prefer to be alone [1]

An "improved sulky" with pneumatic tires and adjustable height was patented at the United States Patent Office by W.J. Hamill on the 15th of August 1893. (see Google patents) The asymmetric sulky was patented in Australia in the 1980s and came to prominence in 1987 when a two-year-old gelding named Rowleyalla used one to break the then world record for his category, at 3.4 seconds under the existing mark.

An additional sulky type is the "team-to-pole" or "pairs" sulky, a lightweight single seat sulky designed for draft by two horses abreast.

These may also be split into two types:

Of the two, the dorsal hitch pairs sulky is the most recent, holding all current world pairs speed records over the mile to July 31, 2005. 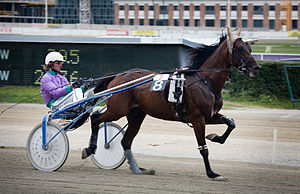 There are two types of sulkies used in harness racing.

When it rains, or the track has excessive moisture, trainers and drivers are required to put plastic mud flaps on the back of the wheels. All race bikes must comply with the relevant procedures and standards in order to be approved. In no way can a race bike have any component that will directly interfere with another horse or driver. 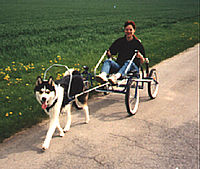 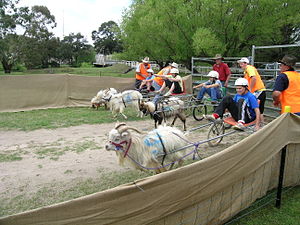 Smaller sulkies are also used for dogs, both for racing and as transportation.

The dog driving sulkies can be divided into two main types:

The great majority of driving sulkies available have the wheel axles rigidly affixed to the frames. This makes for a rough ride on anything but smooth surfaces such as pavement. But in recent years lightweight, single shaft, independent suspension, driving sulkies have been introduced. These allow safe high speed use in off-road conditions.

The most recent designs are of the single shaft type, as proponents believe that this type gives the dog(s) greater freedom, less possibility of injury, and a quicker and easier training regime. A single shaft dog sulky, made of stainless steel tube and fitted with independent suspension and disc brakes, weighs a little under 18 kg. The highest speed so far recorded in one of these sulkies being 64.8 kilometers per hour (February 22, 2007, Australia).

However, as at August 2005, multiple shaft types are still the most common.