From Infogalactic: the planetary knowledge core
(Redirected from Summability theory)
Jump to: navigation, search
For the book series, see Divergent trilogy.
For the film series, see The Divergent Series.

For an elementary calculus-based introduction, see Divergent series on Wikiversity

Les séries divergentes sont en général quelque chose de bien fatal et c’est une honte qu’on ose y fonder aucune démonstration. ("Divergent series are in general something fatal, and it is a disgrace to base any proof on them." Often translated as "Divergent series are an invention of the devil …")

In mathematics, a divergent series is an infinite series that is not convergent, meaning that the infinite sequence of the partial sums of the series does not have a finite limit.

The divergence of the harmonic series was proven by the medieval mathematician Nicole Oresme.

In specialized mathematical contexts, values can be objectively assigned to certain series whose sequence of partial sums diverges, this is to make meaning of the divergence of the series. A summability method or summation method is a partial function from the set of series to values. For example, Cesàro summation assigns Grandi's divergent series

the value 1/2. Cesàro summation is an averaging method, in that it relies on the arithmetic mean of the sequence of partial sums. Other methods involve analytic continuations of related series. In physics, there are a wide variety of summability methods; these are discussed in greater detail in the article on regularization.

... before Cauchy mathematicians asked not 'How shall we define 1−1+1...?' but 'What is 1−1+1...?' and that this habit of mind led them into unnecessary perplexities and controversies which were often really verbal.

A summability method M is regular if it agrees with the actual limit on all convergent series. Such a result is called an abelian theorem for M, from the prototypical Abel's theorem. More interesting and in general more subtle are partial converse results, called tauberian theorems, from a prototype proved by Alfred Tauber. Here partial converse means that if M sums the series Σ, and some side-condition holds, then Σ was convergent in the first place; without any side condition such a result would say that M only summed convergent series (making it useless as a summation method for divergent series).

The operator giving the sum of a convergent series is linear, and it follows from the Hahn–Banach theorem that it may be extended to a summation method summing any series with bounded partial sums. This fact is not very useful in practice since there are many such extensions, inconsistent with each other, and also since proving such operators exist requires invoking the axiom of choice or its equivalents, such as Zorn's lemma. They are therefore nonconstructive.

The subject of divergent series, as a domain of mathematical analysis, is primarily concerned with explicit and natural techniques such as Abel summation, Cesàro summation and Borel summation, and their relationships. The advent of Wiener's tauberian theorem marked an epoch in the subject, introducing unexpected connections to Banach algebra methods in Fourier analysis.

Summation methods usually concentrate on the sequence of partial sums of the series. While this sequence does not converge, we may often find that when we take an average of larger and larger numbers of initial terms of the sequence, the average converges, and we can use this average instead of a limit to evaluate the sum of the series. So in evaluating a = a0 + a1 + a2 + ..., we work with the sequence s, where s0 = a0 and sn+1 = sn + an+1. In the convergent case, the sequence s approaches the limit a. A summation method can be seen as a function from a set of sequences of partial sums to values. If A is any summation method assigning values to a set of sequences, we may mechanically translate this to a series-summation method AΣ that assigns the same values to the corresponding series. There are certain properties it is desirable for these methods to possess if they are to arrive at values corresponding to limits and sums, respectively.

The third condition is less important, and some significant methods, such as Borel summation, do not possess it.[3]

One can also give a weaker alternative to the last condition.

A desirable property for two distinct summation methods A and B to share is consistency: A and B are consistent if for every sequence s to which both assign a value, A(s) = B(s). If two methods are consistent, and one sums more series than the other, the one summing more series is stronger.

Taking regularity, linearity and stability as axioms, it is possible to sum many divergent series by elementary algebraic manipulations. This partly explains why many different summation methods give the same answer for certain series.

For instance, whenever r ≠ 1, the geometric series 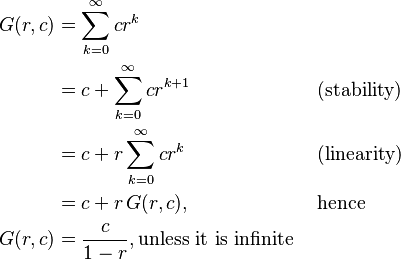 can be evaluated regardless of convergence. More rigorously, any summation method that possesses these properties and which assigns a finite value to the geometric series must assign this value. However, when r is a real number larger than 1, the partial sums increase without bound, and averaging methods assign a limit of ∞.

Absolute convergence defines the sum of a sequence (or set) of numbers to be the limit of the net of all partial sums ak1+ ...+akn, if it exists. It does not depend on the order of the elements of the sequence, and a classical theorem says that a sequence is absolutely convergent if and only if the sequence of absolute values is convergent in the standard sense.

Sum of a series

Cauchy's classical definition of the sum of a series a0+a1+... defines the sum to be the limit of the sequence of partial sums a0+ ...+an. This is the default definition of convergence of a sequence.

Suppose pn is a sequence of positive terms, starting from p0. Suppose also that

If now we transform a sequence s by using p to give weighted means, setting

then the limit of tn as n goes to infinity is an average called the Nørlund mean Np(s).

The Nørlund mean is regular, linear, and stable. Moreover, any two Nørlund means are consistent.

The most significant of the Nørlund means are the Cesàro sums. Here, if we define the sequence pk by

then the Cesàro sum Ck is defined by Ck(s) = N(pk)(s). Cesàro sums are Nørlund means if k ≥ 0, and hence are regular, linear, stable, and consistent. C0 is ordinary summation, and C1 is ordinary Cesàro summation. Cesàro sums have the property that if h > k, then Ch is stronger than Ck.

converges for all real numbers x>0. Then the Abelian mean Aλ is defined as

More generally, if the series for f only converges for large x but can be analytically continued to all positive real x, then one can still define the sum of the divergent series by the limit above.

A series of this type is known as a generalized Dirichlet series; in applications to physics, this is known as the method of heat-kernel regularization.

Abelian means are regular and linear, but not stable and not always consistent between different choices of λ. However, some special cases are very important summation methods.

If λn = n, then we obtain the method of Abel summation. Here

If g(z) is analytic in a disk around zero, and hence has a Maclaurin series G(z) with a positive radius of convergence, then L(G(z)) = g(z) in the Mittag-Leffler star. Moreover, convergence to g(z) is uniform on compact subsets of the star.

Several summation methods involve taking the value of an analytic continuation of a function.

If Σanxn converges for small complex x and can be analytically continued along some path from x=0 to the point x=1, then the sum of the series can be defined to be the value at x=1. This value may depend on the choice of path.

The operation of Euler summation can be repeated several times, and this is essentially equivalent to taking an analytic continuation of a power series to the point z=1.

at s=0, if this exists and is unique. This method is sometimes confused with zeta function regularization.

If J(x)=Σpnxn is an integral function, then the J sum of the series a0+... is defined to be

if this limit exists.

There is a variation of this method where the series for J has a finite radius of convergence r and diverges at x=r. In this case one defines the sum as above, except taking the limit as x tends to r rather than infinity.

In the special case when J(x)=ex this gives one (weak) form of Borel summation.

Valiron's method is a generalization of Borel summation to certain more general integral functions J. Valiron showed that under certain conditions it is equivalent to defining the sum of a series as

where H is the second derivative of G and c(n)=e−G(n).

converges for all x in the support of μ, then the (dμ) sum of the series is defined to be the value of the integral

if it is defined. (Note that if the numbers μn increase too rapidly then they do not uniquely determine the measure μ.)

For example, if dμ = e−xdx for positive x and 0 for negative x then μn = n!, and this gives one version of Borel summation, where the value of a sum is given by

There is a generalization of this depending on a variable α, called the (B',α) sum, where the sum of a series a0+... is defined to be

if this integral exists. A further generalization is to replace the sum under the integral by its analytic continuation from small t.

The series a1+... is called Ingham summable to s if

The series a1+... is called Lambert summable to s if

The series a0+... is called Le Roy summable to s if

The series a0+... is called Mittag-Leffler (M) summable to s if

Ramanujan summation is a method of assigning a value to divergent series used by Ramanujan and based on the Euler–Maclaurin summation formula. The Ramanujan sum of a series f(0) + f(1) + ... depends not only on the values of f at integers, but also on values of the function f at non-integral points, so it is not really a summation method in the sense of this article.

If λn form an increasing sequence of real numbers and

The series a1+... is called VP (or Vallée-Poussin) summable to s if