From Infogalactic: the planetary knowledge core
Jump to: navigation, search
In this article, the Arabic alphabet is transliterated according to ALA-LC romanization.
"Moon letter" redirects here. For the adaptation of the Roman alphabet into tactile form, see Moon type. 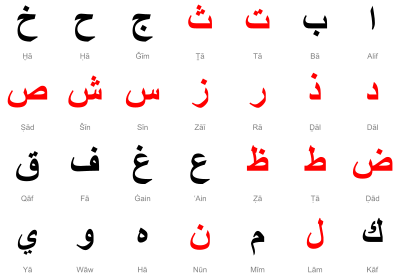 In Arabic and Maltese, the consonants are divided into two groups, called the sun letters or solar letters (Arabic: حروف شمسية‎‎ ḥurūf shamsīyah) and moon letters or lunar letters (حروف قمرية ḥurūf qamarīyah), based on whether or not they assimilate the letter lām (ﻝ l)[1] of a preceding definite article al- (الـ). These names come from the fact that the word for 'the sun', al-shams, pronounced ash-shams, assimilates the lām, while the word for 'the moon', al-qamar, does not.

When followed by a sun letter, the /l/ of the Arabic definite article al- assimilates to the initial consonant of the following noun, resulting in a doubled consonant. For example, for "the Nile", one does not say al-Nīl, but an-Nīl. When the definite article is followed by a moon letter, no assimilation takes place. The sun letters represent the coronal consonants according to the phonology of Classical Arabic, and the moon letters represent all others.

The sun and moon letters are as follows:

The letter ج jīm is pronounced differently depending on the region of the speaker, representing a coronal consonant such as [d͡ʒ] or [ʒ], but also [ɡ] or [ɟ]. However, in Classical Arabic, it represented a palatalized voiced velar plosive /ɡʲ/ or a voiced palatal plosive /ɟ/. As a result, it was classified as a moon letter and it never assimilates the article.

In the written language, the ال al- is retained regardless of how it is pronounced.[1] When full diacritics are used, assimilation may be expressed by putting a shaddah on the consonant after the lām, and non-assimilation by placing a sukūn over the lām.