Sunita Lyn "Suni" Williams[1] (born September 19, 1965) is an American astronaut and United States Navy officer of Indian-Slovenian descent. She holds the records for total spacewalks by a woman (seven)[2] and most spacewalk time for a woman (50 hours, 40 minutes).[3][4] Williams was assigned to the International Space Station as a member of Expedition 14 and Expedition 15. In 2012, she served as a flight engineer on Expedition 32 and then commander of Expedition 33.

Williams graduated from Needham High School in Needham, Massachusetts, in 1983. She received a Bachelor of Science degree in physical science from the United States Naval Academy in 1987, and a Master of Science degree in Engineering Management from Florida Institute of Technology in 1995.[2]

Williams was commissioned an ensign in the United States Navy in May 1987. After a six-month temporary assignment at the Naval Coastal System Command, she was designated a Basic Diving Officer. She next reported to the Naval Air Training Command, where she was designated a Naval Aviator in July 1989. She received initial H-46 Sea Knight training in Helicopter Combat Support Squadron 3 (HC-3), and was then assigned to Helicopter Combat Support Squadron 8 (HC-8) in Norfolk, Virginia, with which she made overseas deployments to the Mediterranean, Red Sea and the Persian Gulf for Operation Desert Shield and Operation Provide Comfort. In September 1992, she was the Officer-in-Charge of an H-46 detachment sent to Miami, Florida, for Hurricane Andrew relief operations aboard USS Sylvania. In January 1993, Williams began training at the U.S. Naval Test Pilot School. She graduated in December, and was assigned to the Rotary Wing Aircraft Test Directorate as an H-46 Project Officer and V-22 chase pilot in the T-2. Later, she was assigned as the squadron Safety Officer and flew test flights in the SH-60B/F, UH-1, AH-1W, SH-2, VH-3, H-46, CH-53, and the H-57. In December 1995, she went back to the Naval Test Pilot School as an instructor in the Rotary Wing Department and as the school's Safety Officer. There she flew the UH-60, OH-6, and the OH-58. She was then assigned to USS Saipan as the Aircraft Handler and the Assistant Air Boss. Williams was deployed on Saipan in June 1998 when she was selected by NASA for the astronaut program.[2] She has logged more than 3,000 flight hours in more than 30 aircraft types.[2] 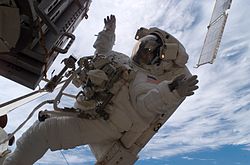 Williams began her Astronaut Candidate training at the Johnson Space Center in August 1998.[2]

Williams was launched to the International Space Station (ISS) with STS-116, aboard the Space Shuttle Discovery, on December 9, 2006, to join the Expedition 14 crew. In April 2007, the Russian members of the crew rotated, changing to Expedition 15. Among the personal items Williams took with her to the ISS were a copy of the Bhagavad Gita, a small figurine of the Hindu deity Ganesha, and some samosas.[7] 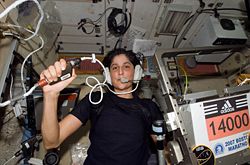 Williams became the first person to run the Boston Marathon from the space station on April 16, 2007

After launching aboard the Shuttle Discovery, Williams arranged to donate her pony tail to Locks of Love. Fellow astronaut Joan Higginbotham cut her hair aboard the International Space Station and the ponytail was brought back to Earth by the STS-116 crew.[8] Williams performed her first extra-vehicular activity on the eighth day of the STS-116 mission. On January 31, February 4, and February 9, 2007, she completed three spacewalks from the ISS with Michael López-Alegría. During one of these walks, a camera became untethered, probably because the attaching device failed, and floated off to space before Williams could react.[9] 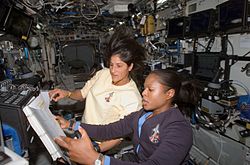 Sunita L. Williams and Joan E. Higginbotham refer to a checklist as they work the controls of the Canadarm2 in the International Space Station's Destiny laboratory

On the third spacewalk, Williams was outside the station for 6 hours and 40 minutes to complete three spacewalks in nine days. She has logged 29 hours and 17 minutes in four spacewalks, eclipsing the record held by Kathryn C. Thornton for most spacewalk time by a woman.[2][4] On December 18, 2007, during the fourth spacewalk of Expedition 16, Peggy Whitson surpassed Williams, with a cumulative EVA time of 32 hours, 36 minutes.[10][11] In early March 2007, she received a tube of wasabi in a Progress spacecraft resupply mission in response to her request for more spicy food. When she opened the tube, which was packaged at one atmospheric pressure, the gel-like paste was forced out in the lower pressure of the ISS. In the free-fall environment, the spicy geyser was difficult to contain.[12]

On April 26, 2007, NASA decided to bring Williams back to Earth on the STS-117 mission aboard Atlantis. She did not break the U.S. single spaceflight record that was recently broken by former crew member Commander Michael López-Alegría, but did break the record for longest single spaceflight by a woman.[2][13][14] Williams served as a mission specialist and returned to Earth on June 22, 2007, at the end of the STS-117 mission. Poor weather at the Kennedy Space Center in Cape Canaveral forced mission managers to skip three landing attempts there over previous 24 hours. They then diverted Atlantis to Edwards Air Force Base in California, where the shuttle touched down at 3:49 p.m. EDT, returning Williams home after a record 192-day stay in space.

On April 16, 2007, she ran the first marathon by any person in space.[15] Williams finished the 2007 Boston Marathon in four hours and 24 minutes .[16][17][18] The other crew members cheered her on and gave her oranges during the race. Williams' sister, Dina Pandya, and fellow astronaut Karen L. Nyberg ran the marathon on Earth, and Williams received updates on their progress from Mission Control. In 2008, Williams participated in the Boston Marathon again, this time on Earth. 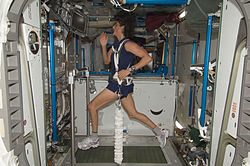 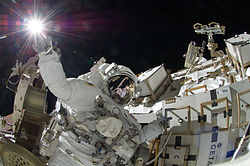 Williams launched from the Baikonur Cosmodrome on July 15, 2012 as part of Expedition 32/33. Her Russian spacecraft Soyuz TMA-05M docked with the ISS for a four-month stay at the orbiting outpost on July 17, 2012.[19] The docking of the Soyuz occurred at 4:51 GMT as the ISS flew over Kazakhstan at an altitude of 252 miles. The hatchway between the Soyuz spacecraft and the ISS was opened at 7:23 GMT and Williams floated into the ISS to begin her duties as a member of the Expedition 32 crew. She was accompanied on the Soyuz TMA-05M spacecraft by Japan Aerospace Exploration Agency (JAXA) astronaut Aki Hoshide and Russian cosmonaut Yuri Malenchenko. Williams served as commander of the ISS during her stay onboard ISS Expedition 33, succeeding Gennady Padalka.[20] She became the commander of the International Space Station on September 17, 2012, being only the second woman to achieve the feat.[21] Also in September 2012, she became the first person to do a triathlon in space, which coincided with the Nautica Malibu Triathlon held in Southern California.[22] She used the International Space Station's own treadmill and stationary bike, and for the swimming portion of the race, she used the Advanced Resistive Exercise Device (ARED) to do weightlifting and resistance exercises that approximate swimming in microgravity. After "swimming" half a mile (0.8 km), biking 18 miles (29 km), and running 4 miles (6.4 km), Williams finished with a time of one hour, 48 minutes and 33 seconds, as she reported.[22]

She returned to earth with fellow astronauts Flight Engineers Yuri Malenchenko and Aki Hoshide on November 19, 2012, touching down in the town of Arkalyk, Kazakhstan. Helicopters joined the search-and-recovery crew to assist them, as their capsule parachuted down some 35 kilometres (22 mi) from the planned touchdown site due to a procedural delay.[23]

As of March 2016[update], Williams has made seven spacewalks totaling 50 hours and 40 minutes,[24] putting Williams in No. 7 on the list of most experienced spacewalkers.[25] On August 30, 2012, Williams and JAXA astronaut Hoshide ventured outside the ISS to conduct US EVA-18. They removed and replaced the failing Main Bus Switching Unit-1 (MBSU-1), and installed a thermal cover onto Pressurized Mating Adapter-2 (PMA-2).[26]

In July 2015, NASA announced Williams as one of the first astronauts for U.S. Commercial spaceflights. [27] Subsequently, she has started working with Boeing and SpaceX to train in their commercial crew vehicles, along with other chosen astronauts.

Williams has declared herself to be a devotee of Hindu god Ganesha and carried the Hindu holy book Bhagavad Gita during space flights.[28][29] She is a member of Society of Experimental Test Pilots.

Williams is married to Michael J. Williams, a Federal police officer in Oregon. The two have been married for more than 20 years, and both flew helicopters in the early days of their careers. She has a pet Jack Russell Terrier named Gorby who was featured with her on the Dog Whisperer television show on the National Geographic Channel on November 12, 2010.[30] In 2012, Williams expressed a desire to adopt a girl from Ahmedabad.[31]

In September 2007, Williams visited India. She went to the Sabarmati Ashram and her ancestral village Jhulasan in Gujarat. She was awarded the Sardar Vallabhbhai Patel Vishwa Pratibha Award by the World Gujarati Society,[32] the first person of Indian descent who was not an Indian citizen to be presented the award. On October 4, 2007, Williams spoke at the American Embassy School, and then met Manmohan Singh, the then Prime Minister of India.[33]

From Oct 4 to 8, 2014, Sunita Williams visited Slovenia. During her stay, amongst other things, she paid a visit to the Astronomical Society Vega in Ljubljana.[34][35]