In grammar, the superlative is the form of an adverb or adjective that is used to signify the greatest degree of a given descriptor. English superlatives are typically formed with the suffix -est (e.g. healthiest, weakest) or the word most (most recent, most interesting). One preposition, near, also has a superlative form, as in Find the restaurant nearest your house.

Example of superlative: "She is [the] most beautiful [of all the women here tonight]."

Simply put, the word 'superlative' is defined as

Some grammarians object to the use of the superlative or comparative with words such as full, complete, unique, or empty, which by definition already denote either a totality, an absence, or an absolute.[1] However, such words are routinely and frequently qualified in contemporary speech and writing. This type of usage conveys more of a figurative than a literal meaning, because in a strictly literal sense, something cannot be more or less unique or empty to a greater or lesser degree. On the other hand, in a strict literal sense, absolutes do only exist within rigorous abstract concepts, such as mathematics, but not in the real world or in the sense of human cognition or communication. For example, in the phrase "most complete selection of wines in the Midwest," "complete" doesn't mean "having all elements represented," it merely connotes that the selection is more well-rounded and relatively extensive. The superlative in this case is not intended to indicate absolutely that all other existing selections are necessarily less extensive, but it suggests that it is probably and currently the most extensive collection officially known.

By another example, an "empty bucket" does not literally exist outside of our imagination, because there is, literally speaking, always some kind of residue in it, and if some of that residue were to be removed, it would logically require either that the bucket becomes "more empty" upon removal, or that it cannot ever be empty in the first place. Similarly, the bucket can logically, but not grammatically, be "most empty" if the superlative denotes something like: "most empty within the limits of current technology." Since applying such an overly literal meaning to superlatives and absolutes is of little use in the real world and common language, it raises the question of whether the grammar rules themselves should be adjusted to permit the usage of absolutes in conjunction with comparatives or superlatives to refer to a state that is closer or closest to fitting the literal definition of the absolute, relative to others in a group. Such a change would allow for a more accurate representation of the world by language and its rules; for example, referring to the bucket with the smallest amount of residue amongst a group of buckets as "most empty" would be both logically and grammatically correct.

In contrast to English, the elative and the superlative are joined into the same degree (the superlative), which can be of two kinds: comparative (e.g. "the most beautiful") and absolute (e.g. "very beautiful").

French: The superlative is created from the comparative by inserting the definitive article (la, le, or les), or the possessive article (mon, ton, son, etc.), before "plus" or "moins" and the adjective determining the noun. For instance: Elle est la plus belle femme → (she is the most beautiful woman); Cette ville est la moins chère de France → (this town is the least expensive in France); C'est sa plus belle robe → (It is her most beautiful dress). It can also be created with the suffixe "-issime" but only with certain words, for example: "C'est un homme richissime" → (That is the most rich man). Its use is often rare and ironic.

Spanish: The comparative superlative, like in French, has the definite article (such as "las" or "el"), or the possessive article ("tus," "nuestra," "su," etc.), followed by the comparative ("más" or "menos"), so that "el meñique es el dedo más pequeño" or "el meñique es el más pequeño de los dedos" is "the pinky is the smallest finger." Irregular comparatives are "mejor" for "bueno" and "peor" for "malo," which can be used as comparative superlatives also by adding the definite article or possessive article, so that "nuestro peor error fue casarnos" is "our worst mistake was to get married."

The absolute superlative is normally formed by modifying the adjective by adding -ísimo, -ísima, -ísimos or -ísimas, depending on the gender or number. Thus, "¡Los chihuahuas son perros pequeñísimos!" is "Chihuahuas are such tiny dogs!" Some irregular superlatives are "máximo" for "grande," "pésimo" for "malo," "ínfimo" for "bajo," "óptimo" for "bueno," "acérrimo" for "acre," "paupérrimo" for "pobre," "celebérrimo" for "célebre."

Scottish Gaelic: When comparing one entity to another in the present or the future tense, the adjective is changed by adding an e to the end and i before the final consonant(s) if the final vowel is broad. Then, the adjective is preceded by to say "more," and as to say "most." (The word na is used to mean than.) Adjectives that begin with f are lenited. and as use different syntax constructions. For example: Tha mi nas àirde na mo pheathraichean. → I am taller than my sisters. Is mi as àirde. → I am the tallest.

In other tenses, nas is replaced by na bu and as by a bu, both of which lenite the adjective if possible. If the adjective begins with a vowel or an f followed by a vowel, the word bu is reduced to b'. For example:

Welsh is similar to English in many respects. The ending -af is added onto regular adjectives in a similar manner to the English -est, and with (most) long words mwyaf precedes it, as in the English most. Also, many of the most common adjectives are irregular. Unlike English, however, when comparing just two things, the superlative must be used, e.g. of two people - John ydy'r talaf (John is the tallest). 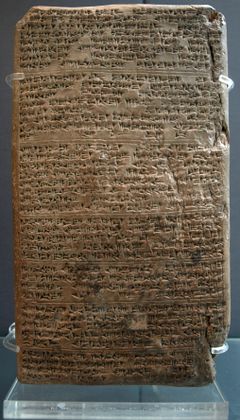 In Akkadian cuneiform, (on a 12 paragraph clay tablet), from the time period of the 1350 BC Amarna letters (a roughly 20-year body of letters), two striking examples of the superlative extend the common grammatical use. The first is the numeral "10," as well as "7 and 7." The second is a verb-spacement adjustment.

The numeral 10 is used for ten times greater in EA 19, Love and Gold, one of King Tushratta's eleven letters to the Pharaoh-(Amenhotep IV-Akhenaton). The following quote using 10, also closes out the small paragraph by the second example of the superlative, where the verb that ends the last sentence is spread across the letter in s-p-a-c-i-n-g, to accentuate the last sentence, and the verb itself (i.e. the relational kingly topic of the paragraph):

".... Now, in keeping with our constant and mutual love, you have made it 10 times greater than the love shown my father. May the gods grant it, and may Teššup, my lord, and Aman make flourish for evermore, just as it is now, this mutual love of ours.[3]

The actual last paragraph line contains three words: 'may it be', 'flourish', and 'us'. The verb flourish (from napāhu?, to light up, to rise), uses: -e-le-né-ep-pi-, and the spaces. The other two words on the line, are made from two characters, and then one: "...may it be, flourish-our (relations)."