From Infogalactic: the planetary knowledge core
Jump to: navigation, search
Not to be confused with Mini.
This article is about the automobile class. For the minicomputer category, see Superminicomputer.
Supermini

Supermini (also called B-segment across Europe)[2] is a class of automobile larger than a city car but smaller than a small family car.[3]

Superminis are usually available in hatchback body styles. The term subcompact car is used for similar cars in North America.

Origins of the term 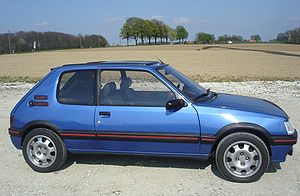 The term supermini developed in the UK in the 1970s as car manufacturers sought a new design to surpass the influential Mini, launched in 1959, and journalists attempted to describe such a vehicle.[4][5]

While manufacturers produced new designs, the term was adopted as an informal categorisation.[6] By 1977, the term supermini was used regularly by the British newspaper The Times.[7] That year, two modern superminis - the Ford Fiesta and Vauxhall Chevette - featured among Britain's 10 best selling cars. A new British car launch that year was the Chrysler Sunbeam supermini. Also selling well were the Fiat 127, Renault 5 and Volkswagen Polo, as well as the Japanese built Datsun Cherry.

In October 1984, the Consumers' Association used the term in its annual Car Buying Guide. It gave an explanation at the start of a section entitled Small Hatchbacks. It said small hatchbacks were known popularly as superminis and while similar to the Mini they were more spacious inside and more versatile. This definition made clear that a "supermini" was something larger than a Mini yet smaller than a typical car of the time. In its 1984 report, it included such cars as the Austin Metro, Vauxhall Nova and Ford Fiesta. This report was also published soon after the launch of a host of other foreign-made superminis which were selling well in Britain - these included the Fiat Uno, Nissan Micra, Peugeot 205, Renault 5 and Volkswagen Polo. The Fiat Uno, launched during the first half of 1983, was widely praised for its high roof which set new standards for interior space and practicality in this size of car. The Peugeot 205, also launched in 1983, won plaudits for its sharp styling and excellent ride and handling.

Smaller or more basic cars were grouped under a Bargain Basement heading and included the Mini, Citroën 2CV, Fiat 126 and Volkswagen Beetle - these accounted for a much smaller share of the market than the modern superminis.[3]

By the mid-80s, the term had become established as a formal car classification term,[8][9] eventually being adopted as the B-segment in European Commission classification.[10]

After the arrival of the hugely popular Fiat Uno and Peugeot 205 in 1983, the next ground-breaking new supermini to be launched in Europe was undoubtedly the Renault Clio in 1990. Launched as replacement for the strong-selling, long-running Renault 5 (which remained in production until 1996). The Fiat Punto, which replaced the Uno at the beginning of 1994. Both the Clio and Punto were European Car of the Year award winners. The Peugeot 205 was gradually phased out following the launch of the smaller 106 in 1991 and the larger 306 in 1993, finally ceasing production in 1998 on the launch of the Peugeot 206. The Mk2 Nissan Micra, built by the Japanese carmaker at its production facility near Sunderland, became the first Japanese winner of the European Car of the Year award soon after its 1992 launch. This accolade was also achieved by the Toyota Yaris seven years later; the Yaris featured a new trend of a high roof on a supermini which allowed for improve interior space, as well as featuring a digital speedometer as standard equipment across the range.

Retro styling became popular on mainstream cars across Europe from the late 1990s, with the first successful instance of this styling on a supermini being BMW's new British-built Mini, launched in 2001 soon after the original Mini ended its 41-year production run. The Fiat 500, launched in 2007 on the 50th anniversary of the original model, also proved popular across Europe.

Some superminis that have not been widely on sale in Europe include Ford Figo, Honda Brio, Honda Logo, Perodua Myvi, Proton Satria, Tata Indica and Toyota Vitz.