From Infogalactic: the planetary knowledge core
Jump to: navigation, search
This article is about the superposition principle in linear systems. For other uses, see Superposition (disambiguation). 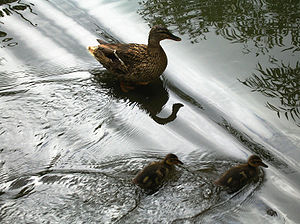 Superposition of almost plane waves (diagonal lines) from a distant source and waves from the wake of the ducks. Linearity holds only approximately in water and only for waves with small amplitudes relative to their wavelengths.

The homogeneity and additivity properties together are called the superposition principle. A linear function is one that satisfies the properties of superposition. Which is defined as

This principle has many applications in physics and engineering because many physical systems can be modeled as linear systems. For example, a beam can be modeled as a linear system where the input stimulus is the load on the beam and the output response is the deflection of the beam. The importance of linear systems is that they are easier to analyze mathematically; there is a large body of mathematical techniques, frequency domain linear transform methods such as Fourier, Laplace transforms, and linear operator theory, that are applicable. Because physical systems are generally only approximately linear, the superposition principle is only an approximation of the true physical behaviour.

The superposition principle applies to any linear system, including algebraic equations, linear differential equations, and systems of equations of those forms. The stimuli and responses could be numbers, functions, vectors, vector fields, time-varying signals, or any other object which satisfies certain axioms. Note that when vectors or vector fields are involved, a superposition is interpreted as a vector sum.

By writing a very general stimulus (in a linear system) as the superposition of stimuli of a specific, simple form, often the response becomes easier to compute.

Two waves traveling in opposite directions across the same medium combine linearly. In this animation, both waves have the same wavelength and the sum of amplitudes results in a standing wave.

Waves are usually described by variations in some parameter through space and time—for example, height in a water wave, pressure in a sound wave, or the electromagnetic field in a light wave. The value of this parameter is called the amplitude of the wave, and the wave itself is a function specifying the amplitude at each point.

In any system with waves, the waveform at a given time is a function of the sources (i.e., external forces, if any, that create or affect the wave) and initial conditions of the system. In many cases (for example, in the classic wave equation), the equation describing the wave is linear. When this is true, the superposition principle can be applied. That means that the net amplitude caused by two or more waves traversing the same space is the sum of the amplitudes which would have been produced by the individual waves separately. For example, two waves traveling towards each other will pass right through each other without any distortion on the other side. (See image at top.)

With regard to wave superposition, Richard Feynman wrote: [2]

No-one has ever been able to define the difference between interference and diffraction satisfactorily. It is just a question of usage, and there is no specific, important physical difference between them. The best we can do is, roughly speaking, is to say that when there are only a few sources, say two, interfering, then the result is usually called interference, but if there is a large number of them, it seems that the word diffraction is more often used.

The difference is one of convenience and convention. If the waves to be superposed originate from a few coherent sources, say, two, the effect is called interference. On the other hand, if the waves to be superposed originate by subdividing a wavefront into infinitesimal coherent wavelets (sources), the effect is called diffraction. That is the difference between the two phenomena is [a matter] of degree only, and basically they are to limiting cases of superposition effects.

Yet another source concurs: [4]

Inasmuch as the interference fringes observed by Young were the diffraction pattern of the double slit, this chapter [Fraunhofer diffraction] is therefore a continuation of Chapter 8 [Interference]. On the other hand, few opticians would regard the Michelson interferometer as an example of diffraction. Some of the important categories of diffraction relate to the interference that accompanies division of the wavefront, so Feynman's observation to some extent reflects the difficulty that we may have in distinguishing division of amplitude and division of wavefront.

The phenomenon of interference between waves is based on this idea. When two or more waves traverse the same space, the net amplitude at each point is the sum of the amplitudes of the individual waves. In some cases, such as in noise-cancelling headphones, the summed variation has a smaller amplitude than the component variations; this is called destructive interference. In other cases, such as in Line Array, the summed variation will have a bigger amplitude than any of the components individually; this is called constructive interference.

File:Waventerference.gif
green wave traverse to the right while blue wave transverse left, the net red wave amplitude at each point is the sum of the amplitudes of the individual waves.

In most realistic physical situations, the equation governing the wave is only approximately linear. In these situations, the superposition principle only approximately holds. As a rule, the accuracy of the approximation tends to improve as the amplitude of the wave gets smaller. For examples of phenomena that arise when the superposition principle does not exactly hold, see the articles nonlinear optics and nonlinear acoustics.

with some boundary specification

while the boundary values superpose:

Using these facts, if a list can be compiled of solutions to the first equation, then these solutions can be carefully put into a superposition such that it will satisfy the second equation. This is one common method of approaching boundary value problems.

By superposition principle, the system can be decomposed into

is a nonlinear function. By the additive state decomposition, the system can be ‘additively’ decomposed into

This decomposition can help to simplify controller design.

According to Léon Brillouin, the principle of superposition was first stated by Daniel Bernoulli in 1753: "The general motion of a vibrating system is given by a superposition of its proper vibrations." The principle was rejected by Leonhard Euler and then by Joseph Lagrange. Later it became accepted, largely through the work of Joseph Fourier.[9]