Supersaturation is a state of a solution that contains more of the dissolved material than could be dissolved by the solvent under normal circumstances. It can also refer to a vapor of a compound that has a higher (partial) pressure than the vapor pressure of that compound.

Special conditions need to be met in order to generate a supersaturated solution. One of the easiest ways to do this relies on the temperature dependence of solubility. As a general rule, the more heat is added to a system, the more soluble a substance becomes. (There are exceptions where the opposite is true). Therefore, at high temperatures, more solute can be dissolved than at room temperature. If this solution were to be suddenly cooled at a rate faster than the rate of precipitation, the solution will become supersaturated until the solute precipitates to the temperature-determined saturation point. The precipitation or crystallization of the solute takes longer than the actual cooling time because the molecules need to meet up and form the precipitate without being knocked apart by water. Thus, the larger the molecule, the longer it will take to crystallize due to the principles of Brownian motion.

The condition of supersaturation does not necessarily have to be reached through the manipulation of heat. The ideal gas law

suggests that pressure and volume can also be changed to force a system into a supersaturated state. If the volume of solvent is decreased, the concentration of the solute can be above the saturation point and thus create a supersaturated solution. The decrease in volume is most commonly generated through evaporation. Similarly, an increase in pressure can drive a solution to a supersaturated state. All three of these mechanisms rely on the fact that the conditions of the solution can be changed quicker than the solute can precipitate or crystallize out.

Crystallization will occur to allow the solution to reach a lower energy state.(Keep in mind that this process can be exothermic or endothermic). The activation energy comes in the form of a nuclei crystal being added to the liquid solution (or a condensation nuclei when the solution is gaseous). This nuclei can be either added from another source, which is known as seeding, or can spontaneously form within the solution due partly to ion and molecule interactions. This process is known as primary nucleation. It is necessary for the nuclei to be identical to the solute that is crystallizing.[5] This will allow for the dissolved ions to build up on the nuclei and then each other in the process of crystal growth or secondary nucleation.[6] There are a multitude of factors that will affect the rate and order of magnitude with which crystallization proceeds as well as the difference in formation of crystallites and Single crystals.

Supersaturation has been a frequent topic of research throughout history. Early studies of these solutions were normally conducted with sodium sulfate, also known as Glauber’s Salt, due to the stability of the crystal and the rising role it had in industry. Through the use of this salt, an important scientific discovery was made by Jean-Baptiste Ziz, a botanist from of Mayence, in 1809.[9] His experiments allowed him to conclude that the crystallization of a supersaturated solution does not simply come from its agitation, (the previous belief) but from solid matter entering and acting as a “starting” site for crystals to form, now called nuclei sites. Expanding upon this, Gay-Lussac brought attention to the kinematics of salt ions and the characteristics of the container having an impact on the supersaturation state. He was also able to expand upon the number of salts with which a supersaturated solution can be obtained. Later Henri Löwel came to the conclusion that both nuclei of the solution and the walls of the container have a catalyzing effect on the solution that cause crystallization. Explaining and providing a model for this phenomenon has been a task taken on by more recent research. Désiré Gernez contributed to this research by discovering that nuclei must be of the same salt that is being crystallized in order to yield crystallization.

Supersaturation is a widely encountered phenomenon both found in environmental processes and exploited in commercial manufacturing. For example, honey, the sweet nectar-derived food source, is a supersaturated solution of sugars. Nectar itself is a sugary solution below the point of saturation. Once bees harvest the nectar, they fan it rapidly with their wings to force evaporation. This forces the solution into a supersaturated state, creating honey. This explains why honey crystallizes, the solution is simply returning to its saturated state.[10] 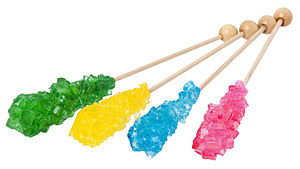 The supersaturation of sugar in water allows for rock candy to form.

Certain candies are made by crystallizing supersaturated solutions of sugar. To make rock candy, manufacturers can raise a solvent to a high temperature, add sugar to reach a high concentration, and then lower the temperature. If a string or stick is present in the solution as it cools, the crystallization will occur on that solid and create a candy. This is the same principle that leads maple syrup to crystallize.[11]

The carbonation of water is also reliant upon the behavior of supersaturated solutions. In this case, the solution is supersaturated with a gas. To create sodas and seltzer water, carbon dioxide gas is forced to dissolve in water beyond its saturation point. This is done by applying high amounts of pressure to the gas in the presence of water followed by sealing the system in an airtight manner.

The characteristics of supersaturation have practical applications in terms of pharmaceuticals. By creating a supersaturated solution of a certain drug, it can be ingested in liquid form. The drug can be made driven into a supersaturated state through any normal mechanism and then prevented from precipitating out by adding precipitation inhibitors.[12] Drugs in this state are referred to as "supersaturating drug delivery services," or "SDDS." [13] Oral consumption of a drug in this form is simple and allows for the measurement of very precise dosages. Primarily, it provides a means for drugs with very low solubility to be made into aqueous solutions.[14][15]