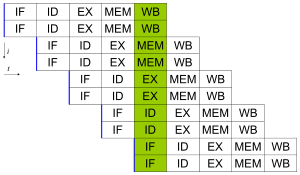 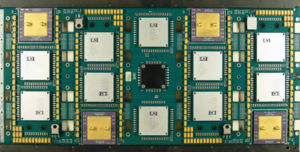 A superscalar processor is a CPU that implements a form of parallelism called instruction-level parallelism within a single processor. It therefore allows faster CPU throughput (the number of instructions that can be executed in a unit of time) than would otherwise be possible at a given clock rate. A superscalar processor executes more than one instruction during a clock cycle by simultaneously dispatching multiple instructions to different execution units on the processor. Each execution unit is not a separate processing unit (called "core") as in multi-core processors, but an execution resource within a single CPU such as an arithmetic logic unit, a bit shifter, or a multiplier.

The superscalar technique is traditionally associated with several identifying characteristics (within a given CPU core):

Except for CPUs used in low-power applications, embedded systems, and battery-powered devices, essentially all general-purpose CPUs developed since about 1998 are superscalar.

The P5 Pentium was the first superscalar x86 processor; the Nx586, P6 Pentium Pro and AMD K5 were among the first designs which decode x86-instructions asynchronously into dynamic microcode-like micro-op sequences prior to actual execution on a superscalar microarchitecture; this opened up for dynamic scheduling of buffered partial instructions and enabled more parallelism to be extracted compared to the more rigid methods used in the simpler P5 Pentium; it also simplified speculative execution and allowed higher clock frequencies compared to designs such as the advanced Cyrix 6x86.

Superscalar CPU design emphasizes improving the instruction dispatcher accuracy, and allowing it to keep the multiple execution units in use at all times. This has become increasingly important as the number of units has increased. While early superscalar CPUs would have two ALUs and a single FPU, a modern design such as the PowerPC 970 includes four ALUs, two FPUs, and two SIMD units. If the dispatcher is ineffective at keeping all of these units fed with instructions, the performance of the system will be no better than that of a simpler, cheaper design.

A superscalar processor usually sustains an execution rate in excess of one instruction per machine cycle. But merely processing multiple instructions concurrently does not make an architecture superscalar, since pipelined, multiprocessor or multi-core architectures also achieve that, but with different methods.

In a superscalar CPU the dispatcher reads instructions from memory and decides which ones can be run in parallel, dispatching each to one of the several execution units contained inside a single CPU. Therefore, a superscalar processor can be envisioned having multiple parallel pipelines, each of which is processing instructions simultaneously from a single instruction thread.

When the number of simultaneously issued instructions increases, the cost of dependency checking increases extremely rapidly. This is exacerbated by the need to check dependencies at run time and at the CPU's clock rate. This cost includes additional logic gates required to implement the checks, and time delays through those gates. Research[citation needed] shows the gate cost in some cases may be

gates, and the delay cost

is the number of instructions in the processor's instruction set, and

is the number of simultaneously dispatched instructions.

Even though the instruction stream may contain no inter-instruction dependencies, a superscalar CPU must nonetheless check for that possibility, since there is no assurance otherwise and failure to detect a dependency would produce incorrect results.

No matter how advanced the semiconductor process or how fast the switching speed, this places a practical limit on how many instructions can be simultaneously dispatched. While process advances will allow ever greater numbers of execution units (e.g., ALUs), the burden of checking instruction dependencies grows rapidly, as does the complexity of register renaming circuitry to mitigate some dependencies. Collectively the power consumption, complexity and gate delay costs limit the achievable superscalar speedup to roughly eight simultaneously dispatched instructions.

However even given infinitely fast dependency checking logic on an otherwise conventional superscalar CPU, if the instruction stream itself has many dependencies, this would also limit the possible speedup. Thus the degree of intrinsic parallelism in the code stream forms a second limitation.

With VLIW, the burdensome task of dependency checking by hardware logic at run time is removed and delegated to the compiler. Explicitly parallel instruction computing (EPIC) is like VLIW, with extra cache prefetching instructions.

The various alternative techniques are not mutually exclusive—they can be (and frequently are) combined in a single processor. Thus a multicore CPU is possible where each core is an independent processor containing multiple parallel pipelines, each pipeline being superscalar. Some processors also include vector capability.