From Infogalactic: the planetary knowledge core
(Redirected from Supervene)
Jump to: navigation, search 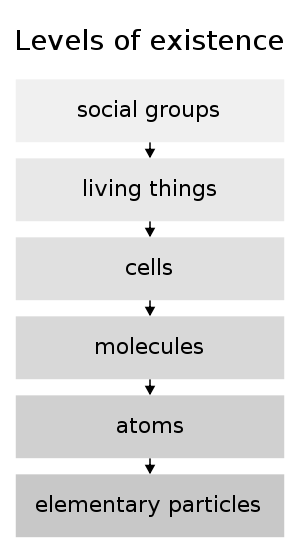 The upper levels on this chart can be considered to supervene on the lower levels.

Though it is intuitively clear what supervenience is, formally specifying what it means involves a complex technical apparatus and a family of related but subtly different definitions. Most definitions involve comparisons of objects for indiscernibility. According to one standard definition, a set of properties A (e.g. mental properties) supervenes on a set of properties B (e.g. neural properties), if and only if any two objects x and y which share all properties in B (are "B-indiscernible") must also share all properties in A (are "A-indiscernible"). The intuitive idea is that if you could make a physical copy of a person, you'd also be making a psychological copy of that person. The reverse does not hold: two people could be in the same mental state, but that mental state could be supported by different brain states (the same mental state could be "multiply realizable" by different brain states). The properties in B are called the base properties (or sometimes subjacent or subvenient properties), and the properties in A are called the supervenient properties.

Supervenience has traditionally been used to describe relationships between sets of properties in a manner which does not imply a strong reductive relationship.[2] For example, many hold that economic properties supervene on physical properties, in that if two worlds were exactly the same physically, they would also be the same economically. However, this does not entail that economics can be reduced in any straightforward way to physics. Thus, supervenience allows one to hold that "high-level phenomena" (like those of economics, psychology, or aesthetics) depend, ultimately, on physical substance, without assuming that one can study those high-level phenomena using means appropriate to physics.

Supervenience, which means literally "coming or occurring as something novel, additional, or unexpected",[2] from "super," meaning on, above or, additional, and "venire," meaning to come, shows occurrences in the Oxford English Dictionary dating back to 1644.

Its systematic use in philosophy is considered to have begun in early 20th-century meta-ethics and emergentism. As G.E. Moore wrote in 1922, "If a given thing possesses any kind of intrinsic value in a certain degree, then... anything exactly like it, must, under all circumstances, possess it in exactly the same degree".[2] The usage also carried over into the work R. M. Hare. For discussion of the emergentist roots of supervenience see Stanford Encyclopedia of Philosophy: Supervenience.

In subsequent years Terry Horgan, David Lewis, and especially Jaegwon Kim formalized the concept and began applying it to many issues in the philosophy of mind. This raised numerous questions about how various formulations relate to one another, how adequate the formulation is to various philosophical tasks (in particular, the task of formulating physicalism), and whether it avoids or entails reductionism.

In the contemporary literature, there are two primary (and non-equivalent) formulations of supervenience (for both definitions let A and B be sets of properties).

Some points of clarification: first, the definitions above involve quantification over properties and hence higher order logic. Second, in (1), expressions of the form

(1) and (2) are sometimes called "schemata", because they do not correspond to actual supervenience relations until the sets of properties A and B, the domain of entities to which those properties apply, and a modal force have been specified. For modal forms of supervenience, the modal strength of the relation is usually taken to be a parameter (that is, the possible worlds appealed to may be physically possible, logically possible, etc.). Also, note that in the early literature properties were not always central, and there remain some who prefer to frame the relation in terms of predicates, facts, or entities instead, for example.

We can begin by distinguishing between local and global supervenience:

For example, if psychological properties globally supervene on physical properties, then any two worlds physically the same will be psychologically the same. The value of global supervenience is that it allows for supervenient properties to be determined not by local properties of an individual thing alone, but by some wider spatiotemporal distribution of things and properties. For example, something's being a dollar bill depends not only on the paper and the inks it is made out of, but also on a widely dispersed variety of features of the world it occupies.

There are also several kinds of global supervenience relations, which were introduced to handle cases in which worlds are the same at the base level and also at the supervenient level, but where the ways the properties are connected and distributed in the worlds differ. For example, it is consistent with global mental–physical supervenience on the simple formulation described above for two worlds to have the same number of people in the same physical states, but for the mental states to be distributed over those people in different ways (e.g. I have my father's thoughts in the other world, and he has my thoughts). To handle this, property-preserving isomorphisms (1-1 and onto functions between the objects of two worlds, whereby an object in one world has a property if and only if the object which that function takes you to in the other world does) are used, and once this is done, several varieties of global supervenience can be defined.

In philosophy of mind, many philosophers make the general claim that the mental supervenes on the physical. In its most recent form this position derives from the work of Donald Davidson, although in more rudimentary forms it had been advanced earlier by others. The claim can be taken in several senses, perhaps most simply in the sense that the mental properties of a person are supervenient on their physical properties. Then:

This weak global thesis is particularly important in the light of direct reference theories, and semantic externalism with regard to the content both of words and (more relevant to our concerns here) of thoughts. Imagine two persons who are indistinguishable in their local physical properties. One has a dog in front of his eyes and the other has a dog-image artificially projected onto his retinae. It might be reasonable to say that the former is in the mental state of seeing a dog (and of knowing that he does so), whereas the latter is not in such a state of seeing a dog (but falsely believes that he sees one).

There is also discussion among philosophers about mental supervenience and our experience of duration. If all mental properties supervene only upon some physical properties at durationless moments, then it may be difficult to explain our experience of duration. The philosophical belief that mental and physical events exist as a series of durationless moments that lie between the physical past and the physical future is known as presentism, and is a form of belief in Galilean relativity.

There are several examples of supervenience to be found in computer networking. For example, in a dial-up internet connection, the audio signal on a phone line transports IP packets between the user's computer and the Internet service provider's computer. In this case, the arrangement of bytes in that packet supervenes on the physical properties of the phone signal. More generally, each layer of the OSI Model of computer networking supervenes on the layers below it.

We can find supervenience wherever a message is conveyed by a representational medium. When we see a letter "a" in a page of print, for example, the meaning Latin lowercase "a" supervenes on the geometry of the boundary of the printed glyph, which in turn supervenes on the ink deposition on the paper.

In biological systems phenotype can be said to supervene on genotype.[5] This is because any genotype encodes a finite set of unique phenotypes, but any given phenotype is not produced by a finite set of genotypes. Innumerable examples of convergent evolution can be used to support this claim. Throughout nature, convergent evolution produces incredibly similar phenotypes from a diverse set of taxa with fundamentally different genotypes underpinning the phenotypes. One example is evolution on islands which is a remarkably predictable example of convergent evolution where the same phenotypes consistently evolve for the same reasons.[6] Organisms released from predation tend to become larger, while organisms limited by food tend to become smaller. Yet there are almost infinite numbers of genetic changes that might lead to changes in body size.[7][8] Another example of convergent evolution is the loss of sight that almost universally occurs in cave fish living in lightless pools.[9] Eyes are expensive, and in lightless cave pools there is little reason for fish to have eyes. Yet, despite the remarkably consistent convergent evolution producing sightless cave fish, the genetics that produce the loss of type phenotype is different nearly every time. This is because phenotype supervenes on genotype.

Arguments against supervenience-based formulations of physicalism

Although supervenience seems to be perfectly suited to explain the predictions of physicalism (i.e. the mental is dependent on the physical), there are four main problems with it. They are Ephiphenomenal ectoplasm, the lone ammonium molecule problem, modal status problem and the problem of necessary beings.

Epiphenomenal ectoplasm was proposed by Horgan and Lewis in 1983, in which they stated, a possible world (a world that could possibly exist) W is identical to our world in the distribution of all mental and physical characteristics (i.e. they are identical), except world W contains an experience called epiphenomenal ectoplasm that does not causally interact with that world. If supervenience physicalism is true, then such a world could not exist because a physical duplicate of the actual world (the world that is known to exist) could not possess an epiphenomenal ectoplasm. This was rectified by Frank Jackson, by adjusting the application of supervenience within physicalism to state "Physicalism is true at a possible world W if and only if any world which is a minimal physical duplicate (i.e. identical) of W is a duplicate of W simpliciter."[citation needed]

The lone ammonium molecule problem provides a problem for Jackson's solution to epiphenomenal ectoplasm. It was proposed by Jaegwon Kim in 1993 when he stated that according to Jackson's idea of supervenience, a possible world W was identical to the actual world, except it possessed an extra ammonium molecule on one of Saturn's rings. This may not seem to provide much of a problem, but because Jackson's solution refers only to minimal physical duplicates, this allows for the mental properties of W to be vastly different from in the actual world. If such a difference would cause mental differences on Earth, it would not be consistent with our understanding of physicalism.

The modal status problem is only problematic if one thinks of physicalism as a contingent truth (i.e. not necessary truth), because it is described in terms of modal notions (i.e. through modal realism). The problem is presented when from the statement "Minimal physical truths entail all truths", one derives the statement "S (a statement that describes all minimal physical truths) entails S* (a statement that describes the world)". This statement is a necessary truth, and therefore supervenience physicalism could not be contingent. The solution to this is to accept the above statement not as the equivalent of physicalism, but as an entailment of it.