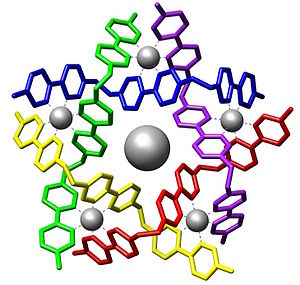 An example of a supramolecular assembly.[1] 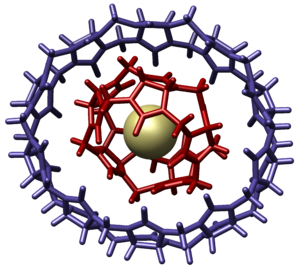 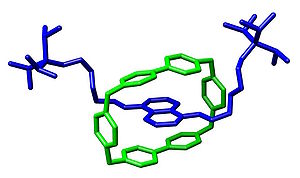 An example of a mechanically-interlocked molecular architecture, in this case a rotaxane.[3] 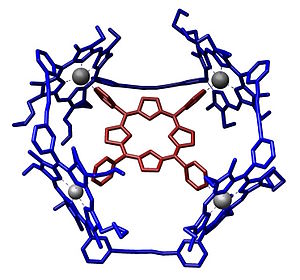 An example of a host-guest chemistry.[4] 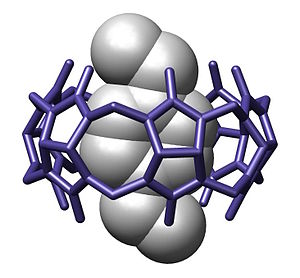 host-guest complex with a p-xylylenediammonium bound within a cucurbituril.[5] 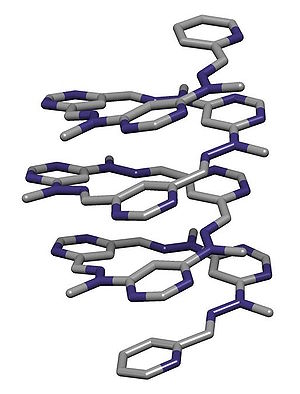 Intramolecular self-assembly of a foldamer.[6]

Supramolecular chemistry refers to the domain of chemistry beyond that of molecules and focuses on the chemical systems made up of a discrete number of assembled molecular subunits or components. The forces responsible for the spatial organization may vary from weak (intermolecular forces, electrostatic or hydrogen bonding) to strong (covalent bonding), provided that the degree of electronic coupling between the molecular component remains small with respect to relevant energy parameters of the component.[7][8] While traditional chemistry focuses on the covalent bond, supramolecular chemistry examines the weaker and reversible noncovalent interactions between molecules. These forces include hydrogen bonding, metal coordination, hydrophobic forces, van der Waals forces, pi-pi interactions and electrostatic effects. Important concepts that have been demonstrated by supramolecular chemistry include molecular self-assembly, folding, molecular recognition, host-guest chemistry, mechanically-interlocked molecular architectures, and dynamic covalent chemistry.[9] The study of non-covalent interactions is crucial to understanding many biological processes from cell structure to vision that rely on these forces for structure and function. Biological systems are often the inspiration for supramolecular research.

The existence of intermolecular forces was first postulated by Johannes Diderik van der Waals in 1873. However, Nobel laureate Hermann Emil Fischer developed supramolecular chemistry's philosophical roots. In 1894,[10] Fischer suggested that enzyme-substrate interactions take the form of a "lock and key", the fundamental principles of molecular recognition and host-guest chemistry. In the early twentieth century noncovalent bonds were understood in gradually more detail, with the hydrogen bond being described by Latimer and Rodebush in 1920.

The use of these principles led to an increasing understanding of protein structure and other biological processes. For instance, the important breakthrough that allowed the elucidation of the double helical structure of DNA occurred when it was realized that there are two separate strands of nucleotides connected through hydrogen bonds. The use of noncovalent bonds is essential to replication because they allow the strands to be separated and used to template new double stranded DNA. Concomitantly, chemists began to recognize and study synthetic structures based on noncovalent interactions, such as micelles and microemulsions.

Eventually, chemists were able to take these concepts and apply them to synthetic systems. The breakthrough came in the 1960s with the synthesis of the crown ethers by Charles J. Pedersen. Following this work, other researchers such as Donald J. Cram, Jean-Marie Lehn and Fritz Vogtle became active in synthesizing shape- and ion-selective receptors, and throughout the 1980s research in the area gathered a rapid pace with concepts such as mechanically interlocked molecular architectures emerging.

The importance of supramolecular chemistry was established by the 1987 Nobel Prize for Chemistry which was awarded to Donald J. Cram, Jean-Marie Lehn, and Charles J. Pedersen in recognition of their work in this area.[11] The development of selective "host-guest" complexes in particular, in which a host molecule recognizes and selectively binds a certain guest, was cited as an important contribution.

In the 1990s, supramolecular chemistry became even more sophisticated, with researchers such as James Fraser Stoddart developing molecular machinery and highly complex self-assembled structures, and Itamar Willner developing sensors and methods of electronic and biological interfacing. During this period, electrochemical and photochemical motifs became integrated into supramolecular systems in order to increase functionality, research into synthetic self-replicating system began, and work on molecular information processing devices began. The emerging science of nanotechnology also had a strong influence on the subject, with building blocks such as fullerenes, nanoparticles, and dendrimers becoming involved in synthetic systems.

Supramolecular chemistry deals with subtle interactions, and consequently control over the processes involved can require great precision. In particular, noncovalent bonds have low energies and often no activation energy for formation. As demonstrated by the Arrhenius equation, this means that, unlike in covalent bond-forming chemistry, the rate of bond formation is not increased at higher temperatures. In fact, chemical equilibrium equations show that the low bond energy results in a shift towards the breaking of supramolecular complexes at higher temperatures.

Thus, thermodynamics is an important tool to design, control, and study supramolecular chemistry. Perhaps the most striking example is that of warm-blooded biological systems, which entirely cease to operate outside a very narrow temperature range.

The molecular environment around a supramolecular system is also of prime importance to its operation and stability. Many solvents have strong hydrogen bonding, electrostatic, and charge-transfer capabilities, and are therefore able to become involved in complex equilibria with the system, even breaking complexes completely. For this reason, the choice of solvent can be critical.

Molecular recognition is the specific binding of a guest molecule to a complementary host molecule to form a host-guest complex. Often, the definition of which species is the "host" and which is the "guest" is arbitrary. The molecules are able to identify each other using noncovalent interactions. Key applications of this field are the construction of molecular sensors and catalysis.[13][14][15]

Molecular recognition and self-assembly may be used with reactive species in order to pre-organize a system for a chemical reaction (to form one or more covalent bonds). It may be considered a special case of supramolecular catalysis. Noncovalent bonds between the reactants and a "template" hold the reactive sites of the reactants close together, facilitating the desired chemistry. This technique is particularly useful for situations where the desired reaction conformation is thermodynamically or kinetically unlikely, such as in the preparation of large macrocycles. This pre-organization also serves purposes such as minimizing side reactions, lowering the activation energy of the reaction, and producing desired stereochemistry. After the reaction has taken place, the template may remain in place, be forcibly removed, or may be "automatically" decomplexed on account of the different recognition properties of the reaction product. The template may be as simple as a single metal ion or may be extremely complex.

Mechanically interlocked molecular architectures consist of molecules that are linked only as a consequence of their topology. Some noncovalent interactions may exist between the different components (often those that were utilized in the construction of the system), but covalent bonds do not. Supramolecular chemistry, and template-directed synthesis in particular, is key to the efficient synthesis of the compounds. Examples of mechanically interlocked molecular architectures include catenanes, rotaxanes, molecular knots, molecular Borromean rings[16] and ravels.[17]

Many synthetic supramolecular systems are designed to copy functions of biological systems. These biomimetic architectures can be used to learn about both the biological model and the synthetic implementation. Examples include photoelectrochemical systems, catalytic systems, protein design and self-replication.[19]

Molecular imprinting describes a process by which a host is constructed from small molecules using a suitable molecular species as a template. After construction, the template is removed leaving only the host. The template for host construction may be subtly different from the guest that the finished host binds to. In its simplest form, imprinting utilizes only steric interactions, but more complex systems also incorporate hydrogen bonding and other interactions to improve binding strength and specificity.[20]

Molecular machines are molecules or molecular assemblies that can perform functions such as linear or rotational movement, switching, and entrapment. These devices exist at the boundary between supramolecular chemistry and nanotechnology, and prototypes have been demonstrated using supramolecular concepts.[21]

Supramolecular systems are rarely designed from first principles. Rather, chemists have a range of well-studied structural and functional building blocks that they are able to use to build up larger functional architectures. Many of these exist as whole families of similar units, from which the analog with the exact desired properties can be chosen.

Macrocycles are very useful in supramolecular chemistry, as they provide whole cavities that can completely surround guest molecules and may be chemically modified to fine-tune their properties.

Many supramolecular systems require their components to have suitable spacing and conformations relative to each other, and therefore easily employed structural units are required.

Supramolecular chemistry and molecular self-assembly processes in particular have been applied to the development of new materials. Large structures can be readily accessed using bottom-up synthesis as they are composed of small molecules requiring fewer steps to synthesize. Thus most of the bottom-up approaches to nanotechnology are based on supramolecular chemistry.[23]

A major application of supramolecular chemistry is the design and understanding of catalysts and catalysis. Noncovalent interactions are extremely important in catalysis, binding reactants into conformations suitable for reaction and lowering the transition state energy of reaction. Template-directed synthesis is a special case of supramolecular catalysis. Encapsulation systems such as micelles and dendrimers are also used in catalysis to create microenvironments suitable for reactions (or steps in reactions) to progress that is not possible to use on a macroscopic scale.

Supramolecular chemistry has been used to demonstrate computation functions on a molecular scale. In many cases, photonic or chemical signals have been used in these components, but electrical interfacing of these units has also been shown by supramolecular signal transduction devices. Data storage has been accomplished by the use of molecular switches with photochromic and photoisomerizable units, by electrochromic and redox-switchable units, and even by molecular motion. Synthetic molecular logic gates have been demonstrated on a conceptual level. Even full-scale computations have been achieved by semi-synthetic DNA computers.

Research in supramolecular chemistry also has application in green chemistry where reactions have been developed which proceed in the solid state directed by non-covalent bonding. Such procedures are highly desirable since they reduce the need for solvents during the production of chemicals.

Other devices and functions